Sprague Ready To Turn The Page 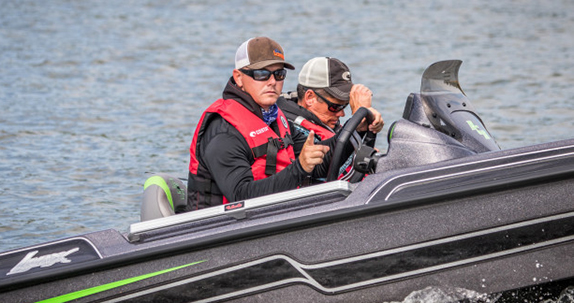 Jeff Sprague is chomping at the bit for the Bass Pro Tour season to get under way.

Jeff Sprague was in east Texas this past October preparing for the Seely Big Bass Fall Shootout at Sam Rayburn Reservoir when he got the call.

About a month prior, the Bass Pro Tour had announced its entry into the national tournament landscape and 80 of Sprague’s fellow pro anglers from both the Bassmaster Elite Series and FLW Tour signed on to compete on the circuit launched by Major League Fishing.

Sprague, who competed as a pro on the FLW Tour between 2014-18, wasn’t bothered that he wasn’t among the first 80 names on the list. Nevertheless, he was a fan of the BPT mission to take the sport to new heights. However, when JT Kenney opted out of the field to fill the role of BPT color analyst and Gary Clouse accepted an invitation to the Bassmaster Elite Series, two spots suddenly came open. Sprague’s name, along with Anthony Gagliardi’s, were next on the list.

When Kelly Jordon called Sprague to gauge his interest and extend an invitation, Sprague didn’t hesitate to accept. He was given a couple of days to mull it over, but he opted to commit over the phone. He formalized his commitment by signing a contract the following day.

“There are few things in life as grown men where we can sense our life is changing at that very moment,” Sprague said. “It happens when you have a child and at other times in life. This was one of those. It’s something you work so hard for and strive so many days out of the year and so many years to do these things. When it comes together, there’s no way to describe it.”

Sprague said he’d been in contact with MLF officials over the last couple of years about joining the field for the Selects, but “the timing was never right for me to come over,” he said. Now that he’s part of the inaugural BPT field, he couldn’t be more excited.

“Nothing about it gives me pause,” Sprague said. “I was for the BPT 100 percent even if I didn’t get an invite because I want to see the sport go in the direction the BPT is trying to take it. I was happy to see it come down the pipe. This is something in bass fishing that we’ve never had happen. It has needed this for a long time.”

He said he was not expecting to be invited as the process played out over a hectic five-week stretch in the fall.

“No, but they knew how strongly I felt about my ability to compete there and my personality would shine with those guys,” he added.

Once word began to spread that Sprague had joined the BPT fray, his phone began buzzing.

Ready For a New Chapter

Not only is the BPT hoping to chart a new course for the top level of the sport, Sprague is anxious to start a new chapter in his career.

After five straight seasons of finishing among the top 50 in points on the FLW Tour and qualifying for the last three Forrest Wood Cups, Sprague is ready to embrace the changes the BPT represents.

“It’s exciting and scary and you’re nervous, but at end of the day I like to compete, and I have the ability to compete at that level,” he said. “I didn’t feel like I was proving anything to anybody on Tour. I was trying to line myself up to win events. I had to learn to train myself to do that.”

Sprague had a strong track record of catching limits during his FLW Tour days (he had limits on 92.4 percent of the competition days he participated in) and he developed into one of the circuit’s more consistent check-cashers. At the same time, though, he’s not intimidated by the notion of switching gears in terms of format. BPT anglers will be credited with the weight of all scorable bass (1 pound or heavier) caught through the course of a day.

“I don’t feel like I’m a guy that has to force myself to try to fish a different way based on how someone else is fishing,” he said. “I’m going to fish how I know and what I feel I’ve perfected the best. I’m going to put myself in position to have success.

“I don’t think that the format change will change me,” he added. “I like to find most the dominant pattern and run with it. If I can catch numbers, the big ones will come. I think guys are willing to sacrifice bites to catch big ones and a lot of times those guys win.”

Sprague remembers being at Lake Fork for a Toyota Texas Bass Classic years ago. He was just out of the military and he’d fished a tournament earlier that day at nearby Lake Cypress Springs.

“I was starting to get into tournaments and I’ll never forget it because they let us in where the pros were parking because we were towing a boat, too,” Sprague recalled.

He and his buddy wound up parked next to Kevin VanDam, whom Sprague had never met. It was an impactful encounter that still resonates today. Now, he’ll be competing against VanDam.

“Whenever you get to see your idol or someone you look up to competing on a body of water you grew up on, that makes it real – that it’s something you can do,” he said. “With a lot of hard work and commitment, I feel blessed to be put in the position I’m in now.”

With the first cast at the Kissimmee Chain BPT roughly six weeks away, Sprague said the anticipation is starting to grow. Reality is starting to kick in. The butterflies are starting to simmer. The first two tournament sites have been revealed and he said that adds to the realness of it all.

“It’s no longer a fairy tale; it’s now becoming a reality,” he said. “Now the excitement grows in a sense that this is about to happen. It’s even more exciting now than when I got the initial invite. Just being able to communicate with the group of anglers that will be competing and being able to voice an opinion on how things are handled and what we want to do as a group to collectively change the sport. It’s been the greatest experience for me.”

> Sprague said he voted to abolish entry fees for the inaugural year, but said he was prepared to pay to play as well.

“I want to see the sport go in that direction,” he said. “Let’s get out of the high-stakes poker and move this sport forward. I wouldn’t have balked at entry fees had it gone that way either.”