BACK
Ready For Elites

Walters Takes Next Step In Progression 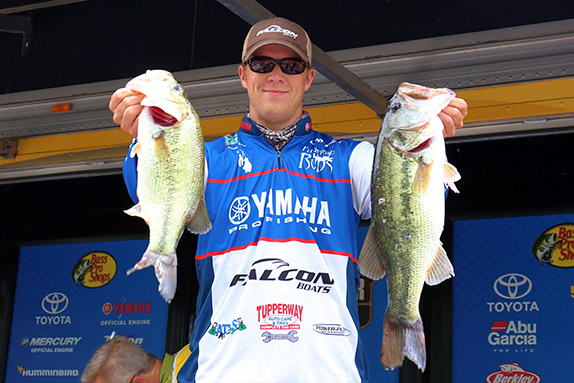 Patrick Walters has finished in the money in seven of his 13 career B.A.S.S. tournaments.

While it may be his name incorporated into the boat wrap next to the driver’s seat and emblazoned across the upper back of his tournament jersey, Patrick Walters has hardly been alone in his quest to reach the Bassmaster Elite Series.

When talking about his rise through the college fishing ranks and recent success in the Bassmaster Opens, seldom does Walters refer to “I”. More often, it’s about the work “we” put in and the good things that have happened to “us”.

“It’s about my family, fans, sponsors,” Walters says when asked to reveal who all he was referring to. “Nobody in their right mind can do this by themselves. It’s a 24/7 thing and even though all of the stats are based on me, I couldn’t be there without their backing. It’s always a team effort.”

To call the 2019 Elite Series rookie humble would be a severe understatement, but don’t let his southern charm fool you. He’s the next in a growing procession of pros who’ve tasted success at the college level, then carried it over to the semi-pro ranks before earning a spot to compete on the top rung of the sport.

Walters won the 2015 FLW College Fishing national championship as a freshman at the University of South Carolina, then captured the win at the Red River Central Bassmaster Open earlier this year. He placed 9th in Central Division points and 15th in the Eastern Division.

At 24, he’ll be among the youngest anglers in the Elite Series field next year, but he’s got a polish and presence that’s far beyond his years. That’s a product, he says, of being “all in” on bass fishing since high school.

“It’s a dream come true and this is what I’ve worked toward,” he said. “This generation of guys going pro, it’s like travel baseball. The families have devoted time to it and it’s a year-round thing. That’s what I’ve done with fishing. I’ve always hunted and fished, but fishing is what I’ve lived for. When I realized you can make it as a pro, I was all in. The main thing is the support and family backing. Without people who back you, I wouldn’t be here today.”

He said his dad played the biggest role in shaping him as an angler. They have fished countless team tournaments together and he’s traveled with him on the Opens circuit.

“We started saltwater fishing and I got into bass in sixth or seventh grade,” he said. “That’s when I fished my first tournament. It was a Fishers of Men event. Just the controlled chaos of the blast off. I’d never experienced anything like it. When we got home, I told my dad we have to get into bass fishing.”

Walters knows he’s entering the pro ranks at a time of unprecedented change in the sport, but he’s excited for the new opportunities that exist from a competition and exposure standpoint.

“A lot of space has opened up,” he said in reference to the exodus of anglers who opted to join the Bass Pro Tour. “People say someone has to fill their shoes. Well, I’m bringing my own shoes. More space has been created. When you look at the college level to BFLs to the Opens and the pros, it was a big bottleneck. I think adding a third tour is great. It’s opened up more opportunity.”

Asked if he was surprised he qualified at such an early juncture of his career, he said he was.

“Yes and no,” he said. “Yes, because we finally made it to the Elites. It’s bittersweet, though, because I wanted to fish against my idols. I’m still fishing at the top level. I’m not surprised because I wouldn’t have signed up if I didn’t believe I had a chance to make it at the next level. You have to know you’re going to make it. Otherwise, why sign up for the Opens?”

He nearly qualified for the Elite Series in 2017 after finishing 8th in points in the Northern Opens, but wound up two points short. In hindsight, he’s glad things worked out the way they did.

“I had one semester left in school and finished 5th in the first Open,” he said. “I just had fun and I figured if I did decent in next two, I’d make the Elites. The next two (tournaments) were at the James Rivers and Douglas Lake and I went for layups. I tried for limits and consistent fish.”

He took it as a learning experience and came back this year with a renewed focus.

“It happened for a reason,” he said. “It was just not my time. I still had school left, but I took it hard. I tried to play it too safe. The tournaments where I just have fun and go fishing, everything falls into place.”

Walters says there isn’t anything that necessarily scares him about moving up to the Elite Series. He’s mostly concerned about being prepared for every event and getting accustomed to the rules and aa feel for how a tournament week goes.

“Not that it worries me, but I always stress about needing to catch ‘em,” he said. “That’s why I always put so much time in on preparation. Nobody prepares to go out and zero. We all want to make the final day. You have to have 100 percent confidence in your equipment and you have to know you’re going to catch ‘em today. It not might not be until 2 p.m., but it’s going to happen.”

He said he always tries to keep that same glass-half-full mindset no matter what the circumstance.

“I’m always optimistic, like everything’s good,” he said. “No matter what’s going on in life, there’s always a positive in it.”

He’s a big fan of river fishing – he lives 25 minutes from the Cooper River in South Carolina – but he’s especially keyed up to visit nearby Winyah Bay in April. Walters won a Bassmaster College event there in 2017.

“I’m looking forward to St. Johns, too,” he said. “There’s not a tournament I’m dreading. I’m not putting all of my eggs into one basket. I will try to win them all, not just Winyah.”