BACK
Inside The Numbers 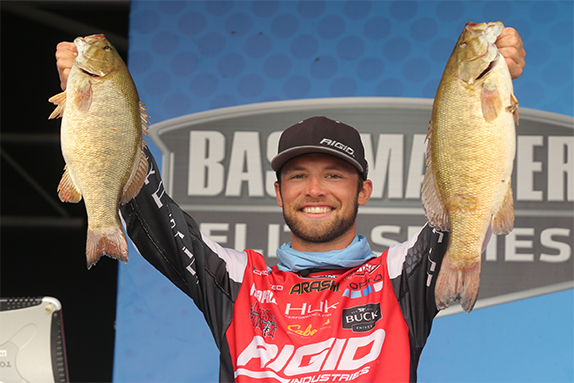 Brandon Palaniuk says he tries to treat each tournament day like day 1.

Editor’s note: This is the first in a two-part series analyzing how day-1 leaders in Elite Series and FLW Tour events have ultimately fared at the conclusion of each tournament. Part 1 examines the Elite Series.

Pro anglers have become fond of the statement, “You can’t win a tournament on the first day, but you sure can lose it.”

The origin of the anecdote has been tough to trace, but for Chris Lane he got a real taste of it at the 2013 Bassmaster Classic. After winning the 2012 Classic at the Red River, he received the champion’s welcome at Grand Lake the following year. He then proceeded to zero on day 1, a gut punch for any pro, let alone a reigning Classic champ. He recovered with a stout 18-11 bag on day 2, but the damage had been done.

“The first day is an important day and that’s the first time I paid attention to it,” Lane said.

Later that year, Lane parlayed the day-1 lead at the Lake St. Clair Elite Series into a victory. He did it again in 2015 at the Sabine River.

“The importance of day 1 is huge because if you have a good day, not only does it give you confidence moving into the rest of the week, it also gives you confidence that what you’re doing is the right thing,” Lane added. “However big the field is, if you can be leading or be in contention, it reiterates that you’re in the right area.”

A BassFan analysis of the 113 full-field, regular-season Bassmaster Elite Series points tournaments dating back to the circuit’s debut in 2006 revealed that Lane’s two aforementioned triumphs are among the 26 instances where the leader after day 1 has captured the win, a conversion rate of roughly 23 percent.

“You’ve got to be in it to win it and to be in it, you’ve got to have a good start,” said Kevin VanDam, who has claimed five of his 10 Elite Series wins after holding the day-1 lead.

While a big day 1 doesn’t guarantee a victory, it almost always leads to a paycheck.

Among the other notable statistical finds:

> The average day-1 place of the eventual winner has been 9.7.

> The biggest day-1 deficit overcome by the eventual winner was 16-07 by Derek Remitz, who rallied to win at Lake Amistad in 2007.

> Seven times in the history of the Elite Series, the eventual winner trailed the day-1 leader by 10 or more pounds. In all seven events, the winner’s daily average weight wound up being 19 pounds or more, meaning there’s a higher likelihood of leaderboard swings at events where big weights are possible or even common.

> Both times Todd Faircloth was the day-1 leader – Lake Gunstersville (2009) and Lake Champlain (2017) – Aaron Martens has claimed the victory. Faircloth won five other times and his average spot on the day-1 leaderboard was 8.8.

While the Elite Series roster will have a drastically different look in 2019, the familiar four-day, cumulative weight format will remain the same, so the importance of a good start will continue to be front and center in the minds of competitors.

Bill Lowen, who declined an invitation to the Bass Pro Tour to return to the Elite Series in 2019, has been the day-1 leader just once in his Elite Series career, which dates to the circuit’s launch in 2006, but he still has vivid memories of the 21-10 that had him out front early on at the 2008 Harris Chain tournament.

“It sets the pace for you and gives you a ton of momentum thinking about what could be,” Lowen said.


Chris Lane has posted a pair of win Elite Series after leading after day 1.

As is the case for some at spring time derbies in Florida, consistency was a moving target for Lowen, who slipped to 15th on the final leaderboard after catching just two keepers on day 3.

“I had some unfortunate stuff happen,” he said. “I lost a couple big fish and the wind blew so hard I could barely even fish. It’s hard to swim a jig and throw a trick worm on a 1/8-oz. weight in those conditions.”

Lane said after day 1 of his St. Clair victory, he had a strong sense he could contend for the win on the weekend. He couldn’t say the same about his triumph at the Sabine River, the finicky tidal system between Louisiana and Texas.

“That’s because I was sharing water with about 150 boats,” he said. “I thought I had to go find something else. After day 2, I realized I had a really good shot to win because I was hitting stuff nobody else was hitting.”

In Lane’s other Elite Series win, at the St. Johns River in 2014, he was 8 ˝ pounds back after day 1, but he erased that deficit (and then some) the following day.

“I was doing something I love to do down in Florida and I was dialed in because other guys down there didn’t catch ‘em,” he said. “That gave me a lot of confidence going into day 2. That’s when I busted 37 pounds. When you do that, that gives you a level of confidence where it’s like, ‘Where’s the next 37 coming from?’”

VanDam, along with Lane and Palaniuk, is among a group of five anglers to capture multiple Elite Series wins after holding the lead following the first day of competition in those tournaments. Greg Hackney and Skeet Reese are the others.

VanDam says he’s learned over the years to lean on productive areas pretty hard on day 1 because the likelihood that he’ll be able to duplicate that success the following day or later in the tournament is very low based on a number of factors.

“There’s no doubt that getting off to a strong start really makes a difference,” he said. “If I have a really good practice, I game plan around that. If you can catch some extra fish and give yourself a few extra pounds of cushion that can go a long way later in the week, especially with the impact of (fishing) pressure and weather changes. I learned that lesson a long time ago. It’s hard to save fish because a lot of things are working against you. There is no guarantee you’ll be able to catch those fish later on.

“At high-profile places like Guntersville or Kentucky Lake, the local pressure and followers can affect the leaders. I know it has me, and I’ve always had to manage that part, too.”

VanDam was the day-1 leader seven times in his Elite Series career and he said the key to his converting those fast starts into victories (five of them) came back to preparation and execution in the given conditions. 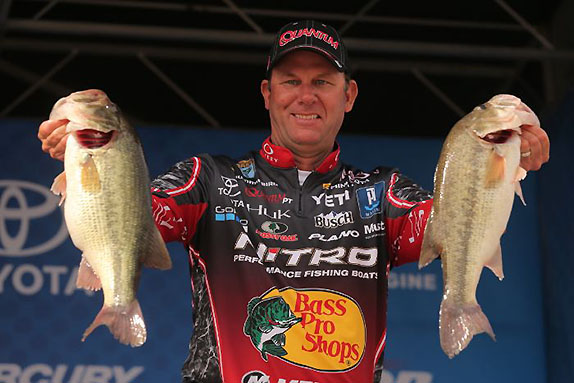 
For Kevin VanDam, day 1 is vital to have a successful tournament.

“In a lot of cases, it was about having a really good pre-practice and practice to game plan your days and to try to have enough spots and fish to carry through. That’s a hard thing to do,” he said. “The reality is you can’t do it at every event because conditions and timing don’t always set up. In those instances, I was smart enough to realize that after day 1 of practice to utilize the rest of practice toward that end goal. In most every one of those cases after the first day, I had a pretty good idea that if I managed my days right I’d have a shot to win.”

The Cayuga Lake tournament in 2016 was one VanDam felt strongly about from the hop, but once day 4 rolled around, he had to scratch and claw to hang on.

“After the first day, I thought I had a pretty good game plan with a chance to win, but on the final day I thought I’d blown it,” he said. “It was still good enough to win, but that was a tough day overall for the field. I think that’s one thing I’ve learned – Sundays are almost always challenging for the guys who are left. Just the level of competition and the pressure. It takes a toll on the overall ability to execute and catch giant sacks four days in a row. There are not many spots that are left untouched.”

Palaniuk tries to treat every day like a day 1, but he has discovered a solid opening round “gives you more freedom,” he says.

“My theory now is that I try to catch as much weight as possible every day,” he added. “Because you never know what the next day will bring. Every ounce I can gain on the field the better.”

At Bull Shoals in 2012 and at the St. Lawrence River the following year, Palaniuk came out of practice supremely confident that he was going to be in the mix come the final day.

“What was crazy about those events was I knew after practice,” he said “It’s hard to say that, but I was very confident that I was going to win those events. Both because I was doing something so completely different from rest of the field.”

What worked in his favor at the Bull Shoals win was in the weeks before the Elite Series arrived, Robbie Dodson had won an FLW Series event there by targeting fish that were migrating out away from the bushes.

“I’d seen the same thing at home where the fish go to the first piece of structure offshore,” Palaniuk said. “On day 1 of practice, I caught a 3-pounder in 18 feet of water and it just clicked. I never saw anyone else fishing offshore.”

In the tournament, he quit fishing his primary areas around 11:30 a.m.

“I had 73 waypoints where I caught a 3-pounder or bigger in practice, but I only fished 10 of them in the tournament,” he said. “It was just one of those where I happened to have the right pieces of information and put it together in a way no one else thought about it.”

For his memorable win at the St. Lawrence, Palaniuk needed just 10 hours of fishing time over four days. He knew if he could get some prime areas on Lake Ontario, the trophy was likely his.

“Before that tournament I did all my research like I normally would and looked at all of the results,” he said. “Every tournament that went out near the lake, the weights were bigger on average by half a pound. That told me that the lake had bigger fish. I started my practice down there and fished shallow and caught 24 pounds. The second day I looked deep and caught 24 or 25. After two days, I knew I couldn’t fish everything I’d found so I spent day 3 figuring out the run and where I could get fuel.

“If I had 45 minutes, I figured I should be able to catch 20 plus. On the second day of practice, the very first place I stopped, I caught 15 pounds on three drops.”