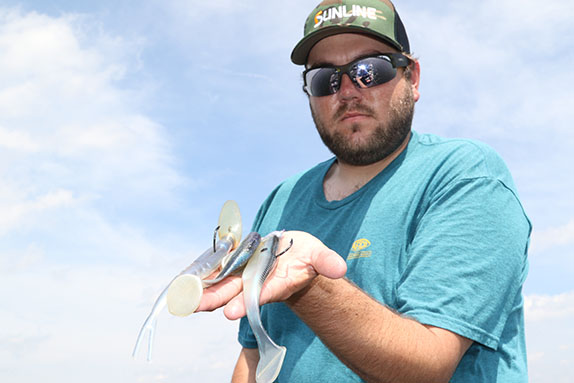 A popular fast-food chain sells cheeseburgers and Whoppers. They sell plenty of both, but when appetites rage, it’s not hard to figure out which one fills the belly faster.

Gizzard shad are the Whoppers of the largemouth bass diet.

True, the green gluttons gobble plenty of the smaller threadfin shad, especially during the fall feeding frenzy. However, locating a pod of the super-sized shad means a shorter path to belly-filling. Moreover, anglers who learn to match this hefty hatch can count on keeping the rod bent.

According to a U.S. Geological Survey report, gizzard shad (Dorosoma cepedianum) naturally occur from central Florida to the southern Great Lakes region, across to parts of New Mexico and northward into North Dakota. Sporadic non-native populations show up from south Florida to Maine, the Great Lakes region and westward into the Plains States.

Throughout much of their range, gizzard shad spend a lot of time around riprap, boulders, stumps, and any shallow structure where their algae meals grow. How shallow? I once saw what looked like two dozen tiny sharks milling around the skinny perimeter of a mud flat. Closer inspection revealed a school of tailing gizzards munching of the bottom buffet.

You’ll mark schools of gizzards in deeper abodes during summer and winter, but fall sees them ganging up in the meager depths where their presence prompts savvy anglers to pull out the big guns to tempt those day-maker bass that can’t resist the thought of a freshwater Whopper.

“I think the bass target them a little more in the fall because that’s when those gizzards get shallow,” said FLW Tour pro Terry Bolton. “A lot of times in the summer, when you find bass shallow they’re usually feeding on bream. But when you find them shallow in the fall, they’re often looking for those big gizzards."

Bass Pro Tour angler Michael Neal adds this: “A lot of fish you catch during the springtime, as they’re feeding up for the pre-spawn, you’ll see the big gizzard shad tails sticking out of their throats. That’s a major food source for the fish feeding up for the spawn. But I feel like anytime the water temperature is 55 degrees or higher the gizzard shad play.” 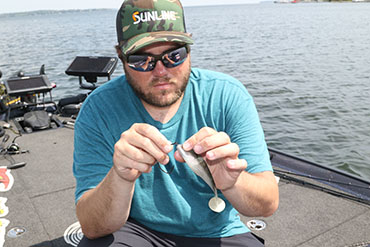 The fall drawdown that occurs in most reservoirs adjusts the playing field for everyone, so Bolton urges anglers to not overlook the shallow bars, flats and humps often occurring near the mouths or the back ends of creeks. Likewise, marking random rock piles or stump clusters during full pool gives you a menu of unseen spots that may attract gizzards and the bass that seek them once the drawdown shaves several feet off the top.

Neal, who designed the ultra-finessey Big Bite Baits Limit Maker Ned-rig worm, puts that dainty stuff away when it’s gizzard-thirty. Fall, he said, offers tremendous opportunity, but you have to decide what you’re seeking.

“Your gizzard shad imitators are going to draw your bigger bites on average,” Neal said. “A lot of your big fish don’t go as deep as the rest of your 3- and 4-pounders.”

For this objective, Neal puts a ton of faith in hefty soft plastics that serve him well in the fall.

> Lead Head — The Big Bite Baits Suicide Shad comes in 3.5-, 5- and 7-inch sizes, with the middle and larger versions doing a good job of imitating gizzards. Neal rigs the baits on a swimbait head sized according to depth and technique – bottom-bumping or targeting suspended fish.

Neal also uses a 7-inch Big Bite Baits Jointed Jerk Minnow on a scrounger to imitate gizzards by digging along the bottom with lots of motion. A great summertime tactic for deep ledges, Neal also brings the strategy into shallower zones for fall action. 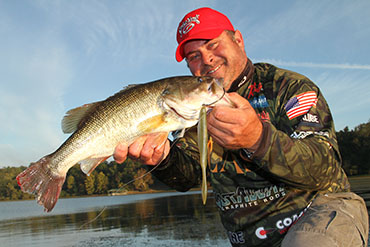 Similarly, Texas angler Troy Broussard likes a Texas-rigged 7-inch Magnum Caffeine Shad – often enhanced by shooting air into the bait’s body with a syringe. Keeping the bait high in the water column is a good idea when bass are pushing gizzards topside, or it they’re running the baits super-shallow.

Other productive tactics for impersonating gizzard shad include:

> Spin to Win — When the jumbo baitfish are holding in dense grass beds with spacious inner lagoons, Bolton targets the edges of the grass line and those lagoon borders for big bass watching their feeding windows for a chunky meal. Large willow-leaf blades are what you want for this deal.

> Take ‘Em on Top — Shallow targets like stumps, rocks, wood and gravel bars are a good bet for the surface bite. Bolton cashes in with a size 13 Storm Arashi Top Walker or a Rapala X-Rap Prop.

> Gettin’ Cranky — For covering water to find the big gizzard-hunters, Kevin VanDam suggests showing those fish the bold profile of a Strike King KVD 8.0. Rumbling and deflecting its way through laydowns, stumps and rocks, this full-size square-bill can trick a big bass into thinking it’s spotted a vulnerable shad. And if, by chance, he marks what looks like a pod of deep gizzards, VanDam will plow the spot with a Strike King 10XD.

In closing, I’ll serve up this memorable image: Working a big fall grass mat, FLW Tour pro Ray Hanselman and I watched bass swirling after a pod of gizzard shad; one of which leapt for his life and landed on top of the mat. Wiggling and splashing in an effort to return to the water, the baitfish must have been putting on one heck of a show because a few seconds after it touched down, the mat exploded with a ravenous fall bass that snatched the shad right through the thinner edge.

So, if you happen to observe something similar, toss a full-size frog onto the mat’s edge and use short, sharp, downward rod strokes to mimic the struggling vulnerability of a gizzard that’s found itself high and dry. Oh, and we shouldn’t have to say this, but hold on!