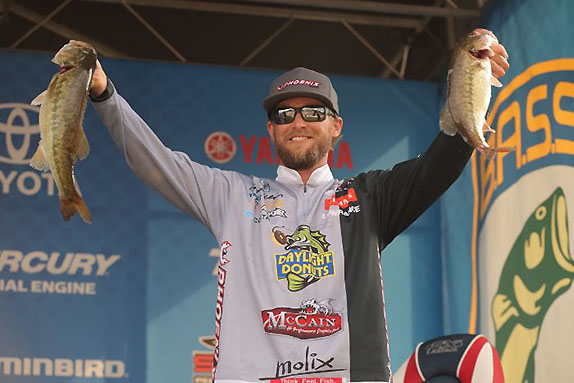 James Elam could not have predicted that his first tour-level win would come in the Bassmaster AOY Championship at Georgia's Lake Chatuge. Sitting at No. 27 on the Angler of the Year points list, he had to be cognizant that a horrible showing could knock him out of the top 35 (the cutoff for next year's Bassmaster Classic).

"Driving over there, I was pretty concerned," said the 6th-year pro from Oklahoma." I'd never been there and I don't have a lot of knowledge of blueback herring lakes. I knew the bass would be keyed on the bait at this time of year, probably roaming and chasing the herring. Plus, it's just a tough time of year to fish in that part of the country."

He figured things out, though, and led the 3-day event from start to finish. He averaged slightly more than 16 pounds per day and outdistanced runner-up Chris Lane by almost 4 pounds.

He ended up 19th in the points to qualify for his fourth consecutive Classic, which will be held on the Tennessee River out of Knoxville, Tenn. in March. He also pocketed a $25,000 bonus for winning the event in addition to his share of the AOY purse ($20,000).

Following are some of the details of his Chatuge program.

Chatuge is home to some hefty largemouths, but Elam opted to focus his attention primarily on spotted bass during the 3-day practice period.

"It seemed like from past tournaments there people weighed mostly spots – it was a pretty predominant thing," he said. "I felt like at this time of year it would be the more stable thing. You could have one good largemouth day, but it'd be really hard to have 3 in a row.

"I knew it was a small lake and the largemouth were going to be shallow, and that stuff was going to get really beat up. I felt better about finding a pattern with the spots and trying to dial that in."

He way-pointed more than 30 schools of spots, mostly on points of varying sizes and grades, including a small handful that contained fish in excess of 3 pounds. He hit those the hardest during competition and used the other locales to fill in the gaps.

"You need a bunch of places because some of them you might never get to fish (due to the presence of other competitors), or you might hit them at the wrong time.

"Schools that weren't active and chasing, if there was one brush pile on the point, that would be like their home base and I kept that in mind. The steeper points seemed to be better early and I'd start on those very day, then the flatter points would be better later in the day when they'd get aggressive and bust (baitfish on the surface)."

Some high finishers employed nothing but topwater plugs, but those offerings didn't produce well for him in the early portion of the day. His arsenal consisted of a Fluke, a jerkbait and a spoon in addition to a surface plug.

Elam had hoped to start day 1 on what he considered his absolute best locale, but arrived to find AOY leader (and eventual winner) Justin Lucas already there.

"I didn't want to interfere with him, so I went to the next point down and caught maybe one or two," he said. "Then he left after a while and I went in there and caught some. I ended up fishing all the other points around there and got off to a pretty good start."

On day 2, another competitor with a higher take-off number beat him to his preferred point and he ended up not catching anything off it the entire day. He fished other points in the area and compiled a stringer that was a quarter-pound heavier than his day-1 haul. It contained three chunky largemouths that had joined the spots in the herring feast.

He began the final day with a lead of a little more than 2 pounds over Jacob Wheeler.

"I don't know much about herring fishing or herring lakes at all, but a guy like him does. That was scary, but I had to block all that out and just fish the best I could."

It was a slow morning and he attributed that scenario to three factors – continued angling pressure from the competitors on the 7,000-acre impoundment, a lot of spectator traffic and a full moon the previous night that allowed the fish to feed while the anglers were asleep. He had only 10 pounds at 1 o'clock, but made four culls in the final hour and a half that gave him the win by a comfortable margin.

> Most of Elam's fish came from the 20- to 25-foot depth range. He occasionally caught them from 10 to 12 feet of water when they were pushing bait toward the bank and picked up a couple of roamers that he'd seen bust over water as deep as 50 feet.

> When fishing the spoon, he'd make a long-distance cast and let it fall – sometimes all the way to the bottom before pulling it back to the middle of the water column and giving it four hard rips. "That would make it kind of streak and they might've thought it was a herring trying to escape or flee."

> He boated 25 keepers on the first competition day and about a dozen on each of the next two. Of the 15 he took to the scale, he estimated that five were enticed by the spoon, five by the topwater plug, three by the fluke and two by the jerkbait.

> Main factor in his success – "I think I knew after practice, which wasn't totally easy, which baits I needed to throw. "I'm a big-time bottom bounder – jigs, Texas rigs or shaking a dropshot and finding fish on my graph and getting them to bite – but I realized that wasn't going to be any good. It was apparent that I was going to have to draw strikes up closer to the surface with moving baits."

> Performance edge – "My Phoenix 921 is just an incredible tournament boat. It has everything – it rides fast, has great storage and it's easy to move around in from one end to the other. My Costa sunglasses were also real important because I needed the right color to see all the followers. Once I saw them come up, I knew there were fish there and I knew to go back." 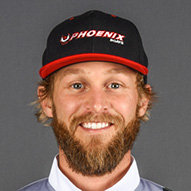