BACK
Big Move By C. Lane 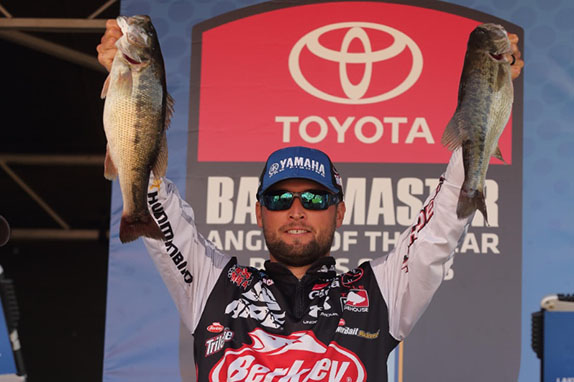 Justin Lucas' 13-12 bag on day 2 of the Angler of the Year Championship event moved him another big step toward capturing the points title.

Only one angler could prevent Justin Lucas from claiming the B.A.S.S. Angler of the Year title this week, and Josh Bertrand hasn't performed at his best. With the way Lucas is going, though, it wouldn't matter if Bertrand were catching a 5-pounder on every cast.

Lucas came into the AOY Championship event at Georgia's Lake Chatuge with a 9-point lead over Bertrand. Everyone else was more than 50 points in arrears, which meant they had no chance to overtake the leader.

A 9th-place finish would lock out Bertrand, and Lucas sits higher than that with 2 of the 3 competition days in the books. His 13-12 haul on Friday gave him a 27-02 total, which was good for 5th place.

"I'm super-happy with that weight," Lucas said. "My goal on Sunday will be to go out there and catch five keepers. If I catch 5 pounds, that'll really put the pressure on Josh."

There will be no fishing on Saturday as the competitors will conduct seminars and partake in other fan-friendly activities at the Georgia Mountain Fairgrounds in Hiawassee. All 50 anglers will be back on the water for Sunday's final round.

Keeper bites were harder to come by on day 2 as only 36 competitors weighed limits (there were 45 five-fish bags the previous day). That's undoubtedly a result of the fishing pressure that's been put on the 7,000-acre reservoir this week.

Lucas' bag exceeded the one he caught the previous day by 6 ounces. It was topped by a 3 1/2-pounder that he caught at about 10 o'clock.

He revealed that he's caught all of his fish on a Berkley Cane Walker topwater plug. 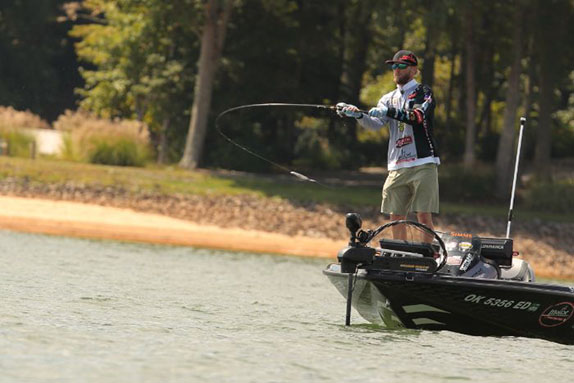 
James Elam stayed atop the tournament standings with a 16-14 stringer.

"The rotation of my spots was a little different today and I caught them from different places," he said. "I mixed up the timing. The bites were scattered throughout the day and I lost some that would've helped me – I could've had 15 or 16 pounds.

"I've been surprised by my weight on both days – in a good way. I normally weigh all my fish, but here it seems like they're all so small that it doesn't matter or so big that there's no reason to weigh them."

He'd prefer to fish on Saturday rather than wait out the off day.

"I'm anxious to get out there and fish. I want to finish it off; I'm tired of thinking about it."

Bertrand boxed 11-14 to move up from dead-last in the field (he boated just two keepers for 3-15 on day 1) to 43rd. However, he once again missed a bunch of bites and compared his performance this week to the dismal hitting of one of the catchers on his beloved Arizona Diamondbacks.

"I have about the same batting average as Alex Avila – I've missed 35 out of 42 bites," he said. "At 2 o'clock I only had two fish in the boat, and then in the last hour I got four bites, jumped one off and landed three. I'm missing some key deal about this (topwater) bite."

Mathematically, his chances of winning the AOY haven't zeroed out, but his odds of beating his good friend Lucas by more than 9 places are now ridiculously long.

"They're maybe 1 in 10,000 – I'd have to catch 20 pounds on Sunday and he'd have to blank. He's got his foot on the gas so much that it might end up not mattering what I caught this week. If that happens, I can just tip my cap to him and say 'great job.' He's just killing them."

Elam weighed all spotted bass on day 1, but his day-2 bag contained three hefty largemouths. He wasn't targeting the green fish – they just showed up in areas where he'd been catching the spots.

One of those fish weighed 4-11 and the other two were 3 1/4-pounders. He did most of his work with a Pencil Popper topwater offering, but also caught one weigh-in fish on a fluke and one on a Molix Lover Spoon.

"I caught 12 fish today, which was down from 25 yesterday," he said. "I probably lost 20 fish – it was just stupid. I can't really count some of them as lost because they're just nipping at the bait and stuff like that.

"I'd probably prefer it if we could just go ahead and fish tomorrow, but it is what it is. A lot of (recreational anglers) saw me out there today and hopefully my stuff doesn't get hit too hard, but I knew that could happen before we got here so I'm not too worried about it."

Wheeler said he "ran around like a madman." He averaged under 2 minutes at each of his many stops.

He went through 15 keepers, the biggest of which was a 3 3/4-pound largemouth that he caught incidentally. He said he lost a spot that was in the 4-pound class. He threw a topwater, a Rapala Shad Rap and a chugging bait.

"Overall, having an off day might help a lot of these fish, but at the same time it might not, depending on how many locals are out there," he said. "I'm sure there will be a lot of people out there tomorrow."

Lane's big stringer was headed up by two big largemouths that both exceeded 5 pounds. He boated just six keepers with a topwater bait and didn't lose any.

"I figured I needed a top 5 here to make the Classic, and even that might end up not being enough," he said. "The good thing is I've put myself in position and I can leave everything on the water on Sunday."