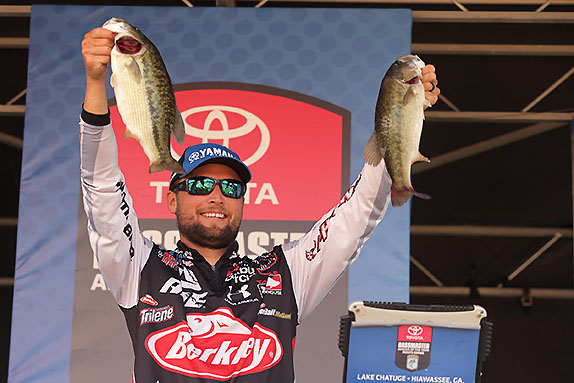 Justin Lucas extended his lead in the Angler of the Year Race to a wide margin with a 13-06 bag on day 1 at Lake Chatuge.

The relatively narrow lead that Justin Lucas had over good friend Josh Bertrand in the B.A.S.S. Angler of the Year race grew exponentially on day 1 of the Bassmaster AOY Championship at Lake Chatuge in Georgia. Lucas' 13-06 stringer was sixth-best in the 50-man field while Bertrand, the winner of the final regular-season event last month at the St. Lawrence River, sits at the bottom of the standings after catching two small spotted bass that combined to weigh 3-15.

"I feel a lot better than I did this morning before take-off," said Lucas, who started the day with a 9-point advantage over Bertrand but now has a 53-point bulge (no other anglers were within striking distance of the top award coming into the tournament). "It's unfortunate for Josh because I know how important this is for him, too ... we've talked about it.

"He knows he stumbled. The same thing could happen to me tomorrow or Sunday and he could have a good day."

Bertrand, who's fishing under the added pressure of having a pregnant wife at home in Arizona scheduled to deliver their second child late next week, said his day was the worst he's had all season.

"It'd be nice to come out and catch 15 pounds tomorrow and at least make this thing interesting," he said. "I didn't want to just roll over."

A little over half the field (29 anglers) weighed at least 10 pounds. The vast majority of the fish brought to the scale were spotted bass, and that species seems to be entirely focused on eating the nomadic blueback herring.

Many of the spots are congregated in deep-water locales and coming to or near the surface occasionally to snatch a blueback. Small topwater offerings are producing most of the bites while standard brush-pile staples such as dropshots and shaky-heads are being largely ignored.

Conditions are crowded on the small (7,000 acres) Hiawassee River impoundment. The competitors are simply rotating through many of the prime locations and anglers reported that there were far more recreational anglers on the water on day 1 than on any of the 3 practice days.

Lowen, who came in at No. 37 on the points list, greatly improved his chances at qualifying for next year's Classic (the top 35 after this event will be assured slots). The same was true for Micah Frazier (38th) and Chad Pipkens (39th), who are 12th and 11th, respectively, in the tournament standings.

On the other side of the ledger, former Classic champion Edwin Evers, who came in at No. 35 on the AOY list, is 36th in the event and will need to move up over the final two competition days in order to get back inside the cutoff. Perennial Classic qualifier Greg Hackney started at No. 42 in the points and needs a big finish to make the 2019 edition, but he dug himself a whole by beginning this event in 34th place.

Lucas caught his biggest fish, a 3 1/2-pounder, toward the end of the day. It replaced a 1 1/2 in his livewell, so it was a significant upgrade.

"It was really tough today, I thought, based on the way practice went," he said. "I wasn't actually catching the fish in practice, but I was pretty confident that I could catch them. 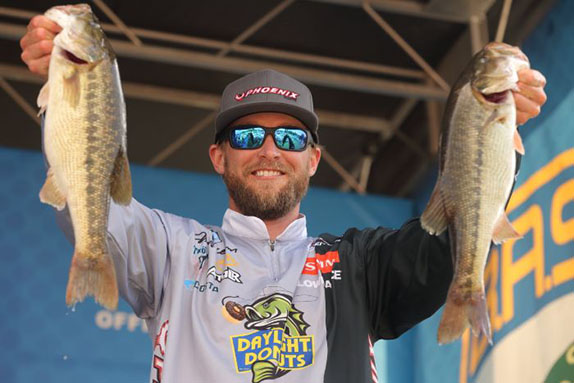 
James Elams had three fish that weighed 3 1/2 pounds or more in his day-best stringer.

"I actually had more weight today than I thought I did, but I really wanted to hit 15 pounds."

He declined to reveal any bait or technique details. He went through about 10 keepers on the day and his new goal is to average 10 pounds over the final two rounds.

"If I can do that, I'll be a happy man," he said. "But each day is going to bring new difficulties."

Bertrand said poor execution is the main reason he finds himself at the bottom of the standings.

"It happens and it's nobody's fault by mine," he said. "I had like 20 bites – all keepers. I had bites on a few different baits, but I didn't put them in the boat. I'd have had at least 10 pounds and maybe as much as 15 if I'd caught everything that bit."

He said the impending arrival of his second child, which he'll leave the tournament to be on hand for if his wife goes into labor early, wasn't a factor in his performance.

"I'd be lying if I said I wasn't thinking about it all day long, but it my mind it didn't affect what I did today. I was able to focus on fishing.

"If I can catch a big bag tomorrow, maybe I can get back in the middle of the pack and at least have some prayer (of overtaking Lucas) on the last day."

Elam's day-best sack was highlighted by three fish that weighed 3 1/2 pounds or more. He had about 15 pounds by 10 o'clock and culled twice during the remainder of the day.

He went through about 25 keepers – all of which were spots. He declined to reveal pattern specifics at this point.

"It was a good day and I got really fortunate," he said. "My timing was perfect and that's probably one of the biggest things about this place right now. The opportunities come easier when you're in the right place at the right time.

"The way I'm fishing is a pretty neat deal and it's a different type of fishing than I've ever done for a full tournament day. The only thing these fish care about right now are the herring and you've got to keep that in mind. They're so fickle and it's hard to get them to commit to a bait, and then when they do it's tough to keep them hooked up."

Wheeler started the day with the expectation of catching somewhere between 10 and 15 pounds, and he hit the maximum end of that range. He handled a dozen keepers, including a 3 3/4-pounder.

"I'm happy with it, absolutely," he said. "It's difficult when you put 50 of the best fishermen in the world on a lake this size – everybody feels like they're dialed into the same stuff.

"I'm just running around with 12 rods on my deck, swapping baits and showing the fish something a little different. I fished a little bit shallow and a little bit deep and I'm just trying to put the pieces of the puzzle together. There's a lot of big ones here and you just have to figure out how to catch them.

"Most tournaments are won off a spot, but this time of year that's almost never the case," he continued. "I'm going to try to run and gun and keep mixing things up. If I can catch 13 1/2 or 14 pounds a day the rest of the way, I'd be pretty pleased with that."