BACK
Much To Be Decided 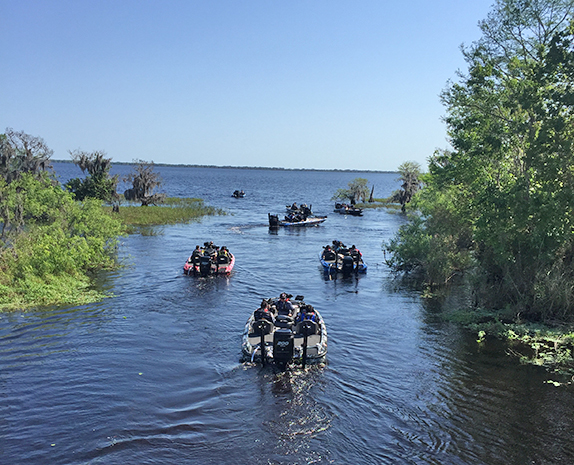 Decisions made by anglers and companies over the next couple weeks could determine how different the landscape of the sport will look in 2019.

In case you’ve been living under a pile of Trick Worms lately, you may have missed the biggest news to hit the tournament side of the industry in some time. Maybe ever.

After weeks of speculation and inventive rumors, we now have a third tournament circuit in the pro bass fishing arena. The Bass Pro Tour was unveiled earlier this week and it’s headed up by the same folks who brought us Major League Fishing. Eight tournaments plus a championship are on the docket for next year.

Basically, the BPT is an expansion of the MLF model and will supposedly offer pros a different competitive vehicle – and increased payouts – compared to what’s been available at B.A.S.S. and FLW. It’ll also serve as a feeder series for the MLF Cups, which continue to attract good-sized audiences on television.

The magnitude of this shakeup cannot be overstated, especially when considering the possibility that anglers who’ve become household names with particular organizations could very well wind up competing under a different banner next year. Those moves will not be made lightly. Nothing is certain yet as to who will be on which roster, but as 2019 draws closer this much is clear: BassFans will have three options to follow bass fishing at the professional level.

Is that a good thing? Time will tell.

Bottom line: 2019 will feature a much different landscape at the top competitive level of the sport. Rather than watching the likes of Kevin VanDam, Skeet Reese and Co. vie for the five biggest fish they can catch over a given 8-hour day on the water, they could be among the BPT anglers chasing every legal-sized bass that swims. For those anglers who’ve never competed under those rules, it will require a wholesale mindset change.

From the anglers’ perspective, as enticing as the introduction of the BPT might be, some will wrestle with the uncertainty of which competitive circuit offers the best option for them and their stable of sponsors. B.A.S.S. suddenly finds itself in the unfamiliar position of having to sell itself to the very anglers that have helped shape the Elite Series and the organization as a whole. FLW could face the loss of a handful of worthy competitors from its Tour roster to the BPT, but names like Andy Morgan and Bryan Thrift and Scott Martin are likely to remain.

While there are still important tournaments left on this year’s schedule, the next few weeks could look and feel like an open recruiting period usually reserved for college coaches and high school athletes, or in this case pro free agents and organizations looking to put their best foot forward.

Last week, FLW essentially kicked off the 2019 season by moving up the first phase of registration for next year’s FLW Tour for eligible anglers. It took some by surprise since the priority period last year didn’t open until late September and ran through Dec. 4. This year, anglers with priority status have until Oct. 15 to submit their deposits for the ’19 season.

Why the six-week swing? FLW said the move was made to accommodate the early start to its ’19 Tour season (Jan. 10-13), but it was still a puzzling move considering the 2018 season started on Jan. 25. It also could have been a message to the FLW Tour anglers waiting on a BPT invite that if they wait too long, their FLW Tour spot could go to someone else.

In addition to that, here’s what we know three days following the BPT announcement:

> In late August, FLW announced a significant expansion and extension of its relationship with the White River Marine Group, the boat-building arm of Bass Pro Shops. In addition to Ranger Boats continuing to be the official boat of FLW, the move cleared the way for more exposure for Nitro and Triton boats across FLW’s platform.

> Earlier this week, the BPT tossed its hat into the tournament series ring with Bass Pro Shops, a marketing partner of MLF’s for several years (the MLF World Championship trophy is named after Bass Pro Shops founder Johnny Morris) being named the title sponsor. While Boyd Duckett told BassFan this week that the BPT will not put any form of sponsorship restrictions on anglers, it will be interesting to see how many anglers aligned with non-White River Marine Group brands sign on and if any eventually switch hulls.

> The initial wave of 80 BPT invitations went out last weekend to anglers from both the Elite Series and FLW Tour, many of whom have participated in MLF Cup or Selects competition. Depending on the acceptance rate of the first wave, additional invitations could be extended to ensure an 80-boat field.

> Multiple sources have confirmed to BassFan that B.A.S.S. owner Chase Anderson conducted a video conference with Elite Series anglers on Wednesday, but presented little in the way of substantive information. He later promised to offer a detailed breakdown of the changes in store for the Elite Series before the end of the week in a supposed bid to thwart a potential mass exodus of competitors.

By then, however, BPT meetings with anglers will be in full swing – meetings were scheduled for Thursday, Friday and Saturday – and it’s unknown what kind of timetable BPT invitees will be given to render a decision about their 2019 plans. This is where it will get interesting as anglers weigh what the BPT has to offer against whatever array of changes B.A.S.S. is prepared to make (possibly a revamped schedule and payout structure) and an FLW Tour that will be void of co-anglers for the first time in 2019.

> The MLF Selects has been dissolved and now the BPT will serve as the feeder system for the MLF Cups, which will double in frequency to four per year as part of the wholesale expansion.

Here’s what we don’t know:

> The criteria and philosophy behind who received BPT invitations. The BPT essentially had the chance to operate a selection process similar to what the NCAA does for its March Madness tournament, cherry-picking the best of the best at this point in time. There were going to be those who felt snubbed, no matter how it shook out. While the identities of those invited have not been disclosed outside of the 28 who are current MLF Cup competitors, transparency in the process will be vital to the initial credibility of the BPT.

A bunch of pro anglers have posted on social media sites about the BPT announcement, mostly praising its arrival and the potential it holds (many of those are known invitees) while others questioned the transparency of the invitation process. It has the chance to polarize certain segments of the fanbase and possibly certain corners within the sport.

> The BPT’s schedule or rules (outside of the standard MLF catch-weigh-release format). To have a viable circuit and to attract a strong group of competitors, the anglers are going to want to know what venues are being considered and the times of year along with what set of rules they’ll be operating under.

> How quickly the business side of the industry will get back up to speed now with the announcement of the BPT. For weeks, months even, marketing folks across the spectrum have been mum on new or revamped deals for 2019 as companies awaited more details about the BPT. Marketing budgets are usually divvied up by late October for the following year so there will be some catching up to do in coming weeks.

> How the sport will look with a broad talent base possibly spread out across three circuits. While B.A.S.S. and FLW have already set their 2019 schedules, it might behoove the three companies to work together on a master calendar that prevents top-tier events from conflicting with each other, thereby giving fans the ability (and reason) to follow all of the circuits.