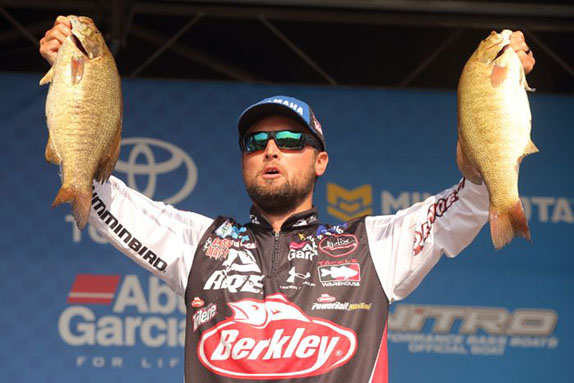 Justin Lucas came within a pound of achieving his third career Bassmaster Elite Series victory at the St. Lawrence River.

There were lots of ways to catch big smallmouth at the St. Lawrence River Bassmaster Elite Series, but by far the most consistent method was drifting dropshot rigs over rocky structure at depths ranging from 20 to 50 feet. The vast majority of the field went that route, including each of the top-5 finishers (Rick Morris, who ended up 6th, threw a Carolina rig).

Anglers who fared well in the bronzeback blowout that concluded the 2018 regular season were understandably somewhat tight-lipped about the specifics of their programs, as B.A.S.S. announced over the weekend that the popular New York venue will be on the schedule for the next 3 years.

Here are some details from the 2nd- through 5th-place finishers.

Angler of the Year points leader Justin Lucas came within a pound of his third career Elite triumph and would've had the total he needed if not for dead-fish penalties – six of them cost him a pound and a half. Five of those came over the first 2 days, before he sought out and got a lesson on fizzing the air bladders of fish caught from deep water from a B.A.S.S. conservation official.

He concentrated on five main locales that were all located within a few miles of each other. By contrast, winner Josh Bertrand had between 30 and 40 places in his rotation.

"They were just current breaks," he said, making a concerted effort to avoid giving away information that could help his competitors on future visits. Most of them weren't too long – a couple hundred yards at most.

"I had a lot of water to fish – there were seven or eight places I didn't hit in the tournament where I'd caught 4 1/2-pounders in practice. I didn't have time to hit them all."

The majority of his fish came from the 35- to 45-foot depth range. All were enticed by the new Berkley PowerBait MaxScent Flat Worm, which will be available for retail purchase next month.

Main factor in his success – "Just choosing to stick around in one area."

Performance edge – "The Humminbird (electronics) and Minn Kota (trolling motor) for the MEGA Imaging and the Spot Lock." 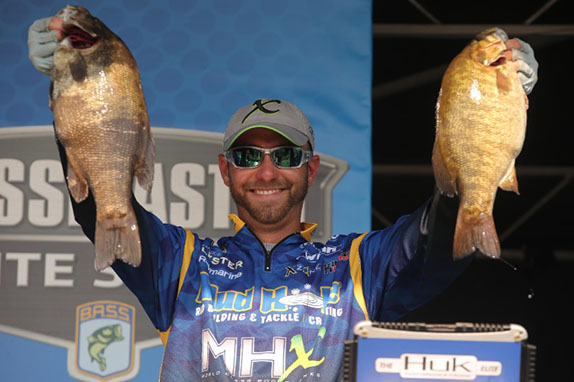 
Weighing a bag lighter than 20 pounds on day 3 was costly for Brandon Lester.

Like Lucas, Lester chose to focus on a handful of places rather than bounce around to dozens.

"I was just targeting shoals and high spots in the river that were 25 to 40 feet deep," he said. "I'd start up ahead and then come across the top and fish the back side. Most of the drifts were 100 to 150 yards – not very long at all.

"The places were all pretty much the same – just current breaks, seams in the current and stuff like that."

He stayed within 10 miles of the ramp in Waddington, N.Y. on his previous two visits to the venue, which resulted in finishes of 32nd (last year) and 67th (2015). He ventured out farther this time.

"I was making a 30-mile run toward (Lake Ontario) and I feel like that was a key for me. A lot of the big ones this week were caught right in that area."

He had a school of quality fish that was highly cooperative in the early hours on 3 of the 4 days. The one day they weren't (day 3) resulted in a substandard stringer of less than 20 pounds.

Viewers of B.A.S.S. Live watched him lose a giant smallmouth next to his boat midway through the final day that almost certainly would've given him enough weight to win.

Main factor in his success – "Deciding to fish a different part of the river this time."

Performance edge – "The Raymarine electronics were a big, big key. I used SideVision to look for isolated rocks on the humps and Chirp Sonar up front on the trolling motor so I could see fish and drop down to them. Then my whole system of the rod, hook and line kept me from losing a lot of fish. Smallmouth can be hard to land, but the big one (on day 4) was the only one I lost all week." 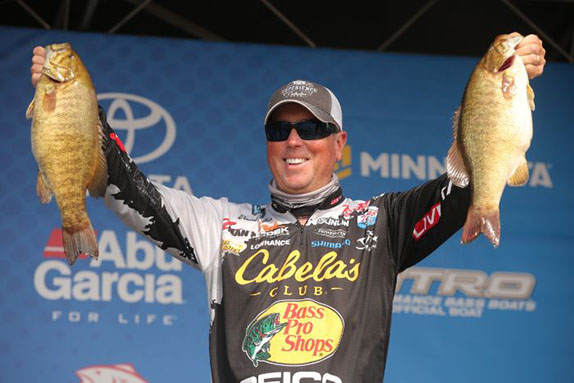 
David Walker's finish equaled his best in a regular-season event since he won at Wheeler Lake in 2011.

David Walker posted a decent finish (40th) on his first visit to the St. Lawrence in 2013 and he's just kept improving from there. He was 22nd in 2015 and 14th in 2017 and his latest placement equaled his highest in an Elite Series event since he won at Wheeler Lake in 2011.

"I was confident coming into this one because I knew I was going to catch fish and that's all I cared about," he said. "I spent a lot of time in practice looking at places I hadn't fished that much in the past. I did a lot of graphing and looking at offshore rocks and kind of revamping my maps.

"I had so much time on my hands and you could drift forever. That allowed me to find areas that weren't all that prominent where I could get bites over and over. I knew from the moment I put my boat in the water (on the first practice day) that it was going to be quite an event – they were biting from that point until we checked in (on day 4). It's an awesome place!"

He had about 30 places where he felt like he could get a quality bite at any given time. "I went there knowing that there was probably a bass there."

Main factor in his success – "I didn't have Classic points or anything like that on the line and I wasn't trying to play it safe. I kept it simple and that actually paid off."

Performance edge – "Probably my electronics – I spent so muchtime looking down that I've got a kink in my neck. I had my Lowrance split three ways between the maps, DownScan and traditional sonar. I could make passes over and over and watch how fish reacted to the boat, the lures and other fish." 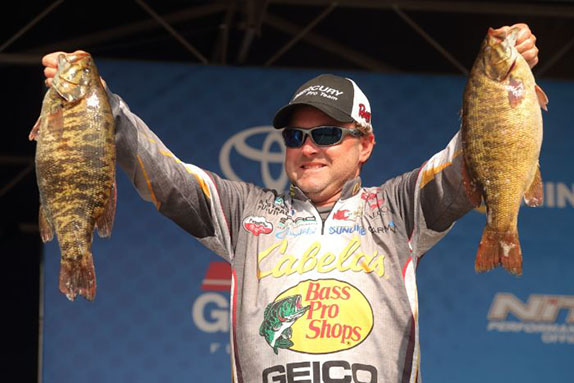 
A specific depth that he declined to reveal was a big key for Mike McClelland.

Mike McClelland logged a 26th-place finish the first time he competed at the St. Lawrence, but his two subsequent appearances saw him finish in the 70s. He was determined to do things differently this time.

"I spent 2 full days in practice look for areas that I'd never made a cast on," he said.

His program wasn't based on sorting through numbers – he didn't get a lot of bites. However, he did connect with a substantial number of 4-plus-pounders.

"I was focusing on a specific depth. I'd rather not say what it was because if I do, everybody will be looking at that depth range the next time we come back."

After drifting a shoal or rock pile, he'd sometimes return to the base of the structure and throw a tube over the top, then hop it back across. That tactic produced a few weigh-in fish, including one in excess of 5-pounds.

> His tube was a Big Bite Super Salty Tube designed by Jeff Kriet. He used a 7'3" Falcon Mike McClelland Signature Series Heavy Duty Finesse rod for that application. "It's got a little more backbone than your typical spinning rod," he said.

Main factor in his success – "The best decision I made was not trying to fish a bunch of places where I'd caught fish in the past."

Performance edge – "I was covering a lot of water every day and the MotorGuide X5 trolling motor was a big factor."