BACK
Another Grind Expected

Cup Regulars Sound Off On Trip No. 4 To Ouachita 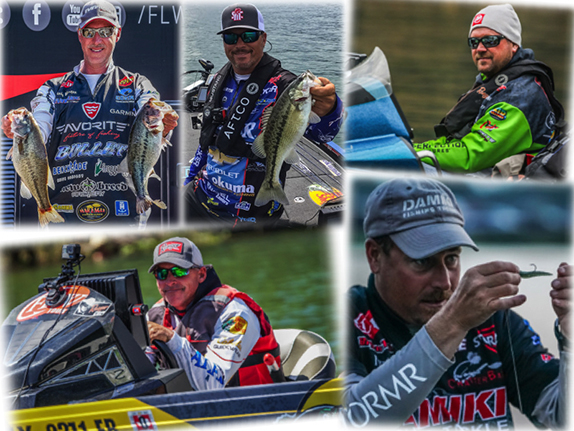 Andy Morgan, Scott Martin, David Dudley, Bryan Thrift and Clark Wendlandt will tackle Lake Ouachita for the fourth time with a Forrest Wood Cup on the line next week.

This year’s Forrest Wood Cup will mark the fourth time in the 21 years it’s been held that Lake Ouachita has served as the championship venue. If you count the 2005 Cup at nearby Lake Hamilton, the city of Hot Springs, Ark., has become the de facto Home of the Cup, hosting five of the last 14 Cups. That’s fine with some competitors, but others wish FLW’s signature tournament wouldn’t circle back to the same place so frequently.

Either way, right around supper time next Sunday, someone will be hoisting a shiny trophy over his head while pocketing a check for $300,000.

Of the 56 anglers in this year’s Cup field, 17 will arrive in Arkansas having already experienced a Cup at Ouachita. Of those 17, only a handful – five, actually – can say they’ve qualified for all four Cups at the 66,000-acre highland reservoir. They’re all household names among BassFans – David Dudley, Scott Martin, Andy Morgan, Bryan Thrift and Clark Wendlandt – and they’ve accumulated eight top-10 finishes, including a victory by Martin in 2011. Dudley, Martin and Thrift have two top-10s apiece.

The “Ouachita Five” has a combined 48 days of Cup competition at the lake and they’ve all experienced the ups and downs that come with fishing in the south during the dog days of summer. Back in 2007, the year Scott Suggs claimed the first $1 million payday in bass fishing, Wendlandt and Thrift notched top-5 finishes, only to finish outside the top 25 when the Cup returned in 2011. Conversely, Martin and Morgan finished 40th and 48th, respectively, in 2007, but came back in 2011 to score top-5 results. Dudley has been the most consistent of the bunch, finishing 8th, 9th and 11th in his three Cup trips to Ouachita.

Martin and Wendlandt were the only ones of the bunch to visit Ouachita prior to it going off limits. Martin spent 1 1/2 days there a couple weeks ago, while Wendlandt put in four days.

“I very seldom pre-fish, but for Ouachita, I wanted to investigate the deep stuff and see what the grass is like and get a feel for the conditions,” Martin said. “Also, I wanted get familiar again with where things are. Sometimes, that can take a whole day for me, like remembering where a certain creek is or what it looked like.”

Below is a breakdown of how the five competitors have fared in the previous Cups at Ouachita and a sampling of their thoughts about next week’s tournament:

“It’s been about the same every time we’ve been back. It’s been won deep twice and once shallow. Two years, I was off the bank and the other one I was shallow. It’s definitely a pattern lake, but it’s such a big lake and it changes year to year. The water level can be different. The clarity can change things up. If it’s super clear, the schooling bite could be strong. If its muddy, shallow could be a factor.”

Scott Martin
> Cup results at Ouachita: 40th (2007), 1st (2011), 5th (2015)
> Cup competition days at Ouachita: 10
> Average stringer in Cup at Ouachita: 11.89 pounds
> Average fish in Cup at Ouachita: 2.64 pounds
> Biggest stringer in Cup at Ouachita: 19-02 (2011 – day 1)
> Ouachita musings: “I enjoy it. I have a unique affection for it since my grandmother was born on the shores of that lake and my family has a homestead in Mt. Ida. I didn’t fish there as a kid, but I have a special connection to the lake. It’s a great venue for a championship because summer time and August fishing is tough no matter where you go. There are so many dynamics, from the grass to shallow bream beds to up the river. It’s a real dynamic fishery. I’ve had some really good tournaments there, but haven’t done so well in other tournaments, too. It’s a nice balance of shallow and deep fishing so it spreads everybody out.

“One thing that’s been changing a lot is the amount of grass. We seem to keep missing the grass bite there and this year may be the year we figure it out. That’s constantly changing. Another thing is the amount of spotted bass in there. They seem to be getting bigger. You can’t win on them, but they can be part of a winning bag.

“One key is managing the patterns throughout the day. You have a pattern first thing in the morning, then hit mid-afternoon stuff, which could be different that later afternoon stuff if a storm is rolling in with some wind. You have to pay attention to all that’s going on and the key is finding something special. Every championship in the summer is all about that special area, zone or spot. It’s not a spinnerbait up a creek. It’s me finding a school on a swimbait in the middle of nowhere (in 2011) or Brad Knight dropshotting wood in a creek or Jacob Wheeler running way up the (Chattahoochee) River at Lanier and catching 20 pounds. You have to find something like that to have a shot at it.”

Andy Morgan
> Cup results at Ouachita: 48th (2007), 5th (2011), 25th (2015)
> Cup competition days at Ouachita: 8
> Average stringer in Cup at Ouachita: 9.34 pounds
> Average fish in Cup at Ouachita: 2.27 pounds
> Biggest stringer in Cup at Ouachita: 18-15 (2011 – day 2)
> Ouachita musings: “The fishing quality is mediocre at best. A place like that doesn’t have any current so when it lines up for a hot, center of summer tournament in the south, it’s tough as nails. It’s mostly clear with no flow and that’s the recipe for tough, tough, tough. I’m going to fish the way I fish and do all the same old crap I always do. I’m a little unexcited about it. I know I’ll have a shot. I’ll run across something in the four days of practice, but the way I have to fish there is a little unexciting. If it were a river system with some current or dirty water, then I’d be excited.

“I think 15 (pounds) a day will cash a pretty big check. You have to stay in the game all day. It’s about getting a handful of bites and being ready for them. I’ve had the bites in 2015 to do fairly good, but if you lose a couple a day, it can hurt. A big part of it is about focus in that heat.”

Bryan Thrift
> Cup results at Ouachita: 5th (2007), 29th (2011), 6th (2015)
> Cup competition days at Ouachita: 10
> Average stringer in Cup at Ouachita: 9.87 pounds
> Average fish in Cup at Ouachita: 2.47 pounds
> Biggest stringer in Cup at Ouachita: 15-07 (2007 – day 1)
> Ouachita musings: “I like it for a Cup tournament. I like those tough, highland reservoir tournaments for the championship. It makes you appreciate it when you get on them. A little goes a long way in a situation like that. It’s got grass, standing timber, shallow and deep fish and suspended fish. It’s got everything you’d want for a summer time fishery. I like summer time fishing so much because it’s more of a grinder’s type of tournament. You’re not going to catch 70 to 80 bass. You’re hoping to catch between 5 to 8 and hope a couple are good ones.

“The only variable is the grass from what I’ve noticed having been there four or five times; how deep it’s growing and whether it’s thick and healthy. I’ve caught some out of it before. The key for me will be keeping my mind focused on fishing for the right five instead of getting out there and it being noon and have only one in the well. I have to make sure I keep myself calm and focused.”

Clark Wendlandt
> Cup results at Ouachita: 3rd (2007), 44th (2011), 20th (2015)
> Cup competition days at Ouachita: 9
> Average stringer in Cup at Ouachita: 7.93 pounds
> Average fish in Cup at Ouachita: 2.23 pounds
> Biggest stringer in Cup at Ouachita: 14-10 (2007 – day 2)
> Ouachita musings: “I really think it’s a kind of a cool lake. It’s a good-sized lake and certainly big enough for this field so we can spread out. We won’t be pressing on each other for the most part. It’s got clear water and a lot of different ways to fish. There’s some vegetation, some timber, some brush and rocky shorelines. You can run up the river. It was won last time in the back of a creek on a dropshot so if you can do that, you can win it just about any way possible.

“I like clear water. I don’t know why, but I just like bass in clear water. I almost think there’s a good chance it’ll get won a way nobody has thought of fishing. Going back time and time again, it’s usually won differently from the last time. I think the key there is about finding an area that it’s working in with the right-sized fish. Even if you have several different ways to fish that area, you need to find the right-sized fish.”