Don't Be Intimidated By Muddy Water 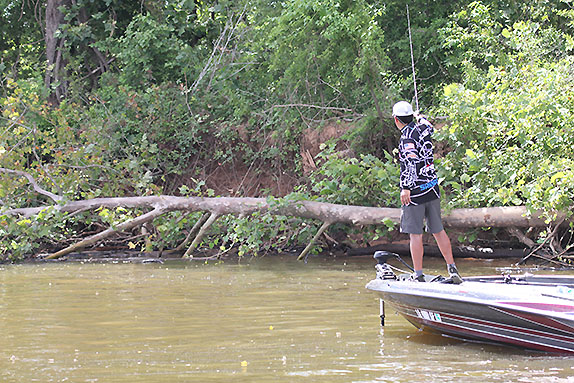 Muddy water conditions can be intimidating, but there’s plenty of potential for those who would seek it.

Muddy waters; the very words draw disgruntled groans and head-shaking irritation among bass anglers. But is it necessarily a bad thing? Not really, and we’re not pulling one of those "sweet lemons" mind traps. It’s simply a case of downplaying the negatives and optimizing the upside.

Now, everyone has their own clarity meter, based on what’s normal for their neck of the woods. Suffice it to say that a little rain stain that drastically alters the bite on a pristine highland reservoir won’t impress anyone in more turbid Southern waters. For our purposes, though, we’ll stick with a truly muddy scenario – like a couple inches of visibility kind of deal.

Nick Lebrun, who recently won the BFL All-American on Louisiana’s Cross Lake, says he embraces the mud, whether it’s the result of recent weather impacts or the day-to-day muddiness common to fisheries like the Red River or Lake Dardanelle.

“Muddy water can be intimidating, but the good thing is it puts the fish shallow and tight to cover,” Lebrun said. “That gives you the advantage of knowing where they’re going to be; you just have to figure out what they want that particular day.”

“The strike zone is smaller because they can’t see as well, so they move shallow to allow themselves better feeding opportunities,” Gleason said. “In muddy waters, it’s tight quarters and you have to hit them on the head to get them to bite.”

On the upside, Gleason says: “If you want to put a positive spin on muddy water, it would be that you’ve eliminated part of the lake. The fish are going to be shallow and to take it a step further, they’re going to be near targets shallow.”

Also worth noting, the mud lines formed from rain runoff or dam releases offer fish much-needed shade during summer’s swelter, while also providing a light/dark transition area from which bass can ambush prey.

“Even though the bite is tough in muddy water, when you do get bit, they slam it; they’re not shy,” Lebrun said. “It may be hard to get bit in general, but when you get bit, they let you know about it.”

Spinnerbaits area a big deal for muddy water, as their flash, vibration and overall hefty profile fit the scenario perfectly. A couple of pointers here: First, FLW Tour pro Jeff Sprague’s a fan of adding vivid colors like orange to his blades for dirty water. White’s another good option, as are the copper blades Gleason uses on his chartreuse/white. Also, splitting the blades with a willow-leaf for flash and flutter and a Colorado for big thump covers your bases.

“If I’m around really big fish, I’ll tip my spinnerbait with a 3 1/2-inch V&M Thundershad Jr. swimbait,” Gleason adds. “This just adds more bulk and vibration to the spinnerbait. I’ll use a white swimbait and I’ll spray-dye the tail chartreuse.”

During his recent Bassmaster Elite Series win on the Sabine River, Greg Hackney put his signature Strike King Hack Attack Select ToadBuzz to work for a big, noisy profile that proved advantageous in the muddy water.

“The toads that come with that buzzbait are wide but not thick, so it exposes the hook well, but it makes the bait ride high,” Hackney said during a Bassmaster Live segment. “I can just barely turn that reel handle and keep that buzzbait up.

“I honestly think you’ll catch fish on this bait that you wouldn’t catch on a buzzbait with a skirt. Also, hookup percentages are higher with that toad in the back. The fish just get it. The bait has some meat to it, so when they come up on it, they feel something.”

Lebrun likes a V&M Lightning Blade and he goes with a 3/8-ounce model so he can run it high in the water column. He likes white and chartreuse for his skirt, but the key is a gold blade for maximum flash. 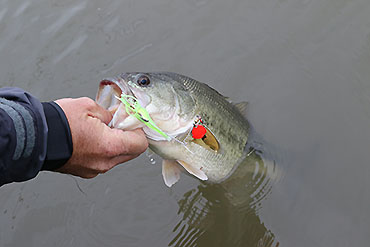 
Adding a vivid color such as orange, white or chartreuse to your spinnerbait helps it stand out in muddy water.

Gleason also likes a 6th Sense Lures Crush 50 — a 2- to 4-foot diver with lots of motion. His choice of chartreuse/black presents significant contrast that helps fish find the bait.

“This bait eliminates two of the key factors — I don’t have to worry if a fish can see it or feel it,” Gleason said. “That square-bill vibrates and moves a lot of water so the fish can feel that around cover. Also, I know they’re going to see chartreuse and black.

If your reaction baits don’t produce, or if you feel like the spot’s worth a little mop up, flipping and pitching to that cover allows you to systematically probe your bait right in front of any fish that's holding tight. Bait style is less specific in the low visibility, but one thing is certain – bigger is better. Simply put, bass find a lot of their muddy-water meals with their lateral line, so the more water your bait’s displacing, the better job you’re doing.

For example, Strike King’s Magnum Rage Bug is basically a super-sized version of the popular Rage Bug flipping/pitching bait, but this beefy 4 1/2-inch bait was made with muddy water in mind. Jumbo lizards, 7-inch Senkos, full-sized creature baits, big ribbontail worms — all fair game and all good choices when you need to get a fish's attention in muddy water.

Texas ace Phil Marks says one of his top muddy-water mandates is to do whatever he can to make sure the fish detect his bait. Bumping hard cover with reaction baits is always a good strategy, but he’ll pause his bait a little longer after each impact.

“You want to go with a lighter weight so the bait doesn’t fall as fast,” Marks said of his pitching presentations. “You want to keep the bait in the strike zone a little longer.

> Short strikes: In the lower visibility of muddy water, fish often swipe at baits and miss. You’ll want to make sure you snare anything that bites, so make sure you run a trailer hook on your spinnerbait.

> Backseat drivers: A fluke or a swimbait on a bladed swimjig combines vibration, water displacement and flash into an agitating profile that casts well on windy days

> Line up: Lower visibility allows you to upsize your line with less concern about spooking fish. More importantly, increasing the size of your fluorocarbon or braid slows the fall rate. Combine this with bulkier baits and lighter weights for maximum face time.

During the recent FLW College Fishing National Championship on the Red River, Thomas Soileau paired up with Hunter Freeman to win the title for the University of Louisiana-Monroe. The next day, the teammates faced one another in a fish-off for a Forrest Wood Cup berth. Freeman won the fish-off, but Soileau’s tactics were Muddy Water 101.

With that final round confined to the Red River South Marina Bay, a perpetually turbid oxbow, Soileau focused mostly on the bay’s southeastern bank and caught his fish on a Texas-rigged Big Bite Baits Fighting Frog (black neon), a 5/16-ounce shaky head with a green-pumpkin Zoom Finesse Worm and a Strike King 1.5 square-bill in the sexy shad color. He noted that the bay’s shallow wood and chocolate-milk water reminded him of his Ouachita River roots.

Finishing 6th at the College Championship, Caleb Jones and Hunter Malmay of Northwestern State committed their entire event to looking for muddier water and picking apart every piece of main river cover – front, middle and back – with Texas-rigged black/blue V&M J-Bugs. Malmay said they lost a couple of good ones that were deep in the cover, but you can’t catch what you don’t hook and he said he and his partner executed on a game plan designed for muddy water.

When fishing muddy waters, consider your ability to safely enter and exit your shallow fisheries. Lots of day-wrecking obstructions can hide just below that dirty water, so go slow ’til you know.

Hackney says his T-H Marine Atlas hydraulic jack plate is invaluable for raising his engine above the potential trouble spots and multi-piece or telescoping push-poles are good for finessing your way through the mine fields.