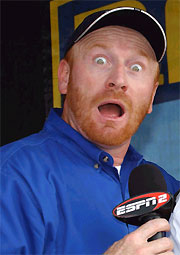 Fish Fishburne was stunned that he was given an ultimatum and then was asked to resign.

Fish Fishburne said he didn't want to leave his job as BASS emcee, but had no choice. His contract with ESPN (he wasn't employed by BASS) was up this year, and a replacement agreement had been in the works for at least 5 months. The week before last – just 2 weeks before the Bassmaster Tour season opener – he finally received a contract from ESPN, and was told to take it or leave it. He left it.

The no-choice part was what he called "the time element." He'd informed ESPN that he wanted to spend less time on the road. "My goal was to reduce my calendar in order to open other doors" largely within BASS, he said. He also wanted to spend more time with his family. But ESPN sent him a contract that had him "doing everything Bassmaster," to the tune of being on the road for around 45 weeks in 2004. He told ESPN that "there's not enough time in the year to provide the services you're asking for." He wanted to negotiate about the time required (it wasn't about money, he said), and was told to accept the contract as written or resign. He resigned. "I still can't understand why there was no negotiation," he said.

"I feel very awkward because I thought everything would work out. I hope no one suffers from this decision. It was my goal at each event to showcase the anglers and allow them a pedestal to promote their sponsors. And I think the sponsors will suffer a little because I worked diligently to understand and promote the products that were BASS-friendly.

"That's the downside," he said. "The good side – and there's a good in everything – is that Fish Fishburne is a free agent. If there's ever been an opportunity for me to expand, now is the time."

BASS apparently had little or no say in the decision – which, if true, is odd considering that it knows far better than ESPN the market it is trying to reach, and that Fishburne had essentially become the face of BASS. Not only was he handling all the tournament emcee duties, in July 2003 he became the fishing correspondent for ESPN Radio, and was slated to share on-air TV duties with Jerry McKinnis and Tommy Sanders this year, something he started doing in the December Open Championship telecasts. Moreover, Fishburne probably has the biggest fanbase of any personality associated with BASS or ESPN's outdoors initiatives, and many feel that he and Ray Scott are the best tournament emcees in professional fishing.

BASS told BassFan that "Fish Fishburne is no longer an employee of BASS. We were unable to come to an agreement on terms. We are thankful for his efforts, have no hard feelings and wish Fish well." Montgomery, Ala. radio host Don Day, who has helped and filled-in as emcee over the years, is filling in again.

Fishburne said: "I love (BASS) and had what I would consider a first-class relationship with them." In fact, after he resigned from ESPN, he called BASS. "My position to them was, 'Now that I've resigned and made myself an independent contractor, I'd like to let you know my services are here.'" He said BASS thanked him for the call.

> Judging by the grapevine buzz in the pro and industry ranks, Fishburne wasn't the only one stunned by ESPN's decision.

> Fishburne was a competitor on the Bassmaster trails for 10 years – as part of "Team Grandma" – before getting a gig on the other side of the mic.

What's your opinion of this? Let us know by clicking here.