BACK
Studied Under Nixon 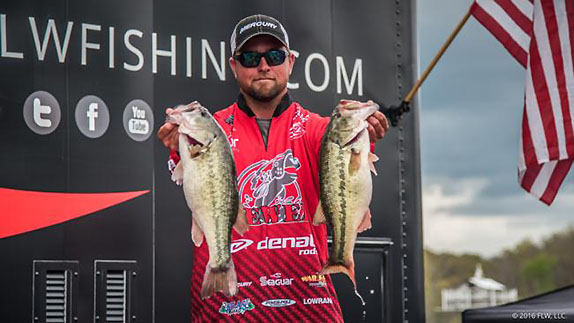 Joey Cifuentes had a big day from the back of the boat on day 2 last year at Beaver Lake.

Joey Cifuentes has won an FLW event in each of the past 3 seasons. If he continues that streak in 2017, the victory could come with a six-figure payday.

The 28-year-old Arkansan will step up to the pro division on the FLW Tour this season after spending the last 3 campaigns traveling and practicing with the legendary Larry Nixon and competing as a co-angler. He topped the back-seater field last year at Beaver Lake and did the same at a Southwestern FLW Series derby at Sam Rayburn Reservoir in 2014.

During the intervening year, he copped the trophy at a BFL at Lake Dardanelle from the front of the boat.

With several venues on the schedule that are unfamiliar to most veteran Tour pros, he thinks he's picked a good year to launch his pro career. He finished 6th in the final co-angler points standings last year and 4th the year before that.

"There's some new lakes that those guys haven't been to a lot," he said, referring to stops at locales such as Lake Travis in Texas, the Harris Chain in Florida and Lake Cumberland in Tennessee. "I think that's going to level the field out and maybe a guy like me can come in and be competitive right away.

"I loved the learning aspect of fishing with Larry, but I felt like I needed to take that next step after 2 years in a row in the Top 10 as a co-angler. I feel like I can win and there's more money on the pro side. I figure I might as well go for it while I'm young."

Baseball was Cifuentes' primary sporting pursuit until just a few years ago. After exhausting his eligibility on the diamond at Southern Arkansas University, he still needed another year of schooling to obtain a bachelor's degree in exercise science (he'd planned to become a physical therapist).

Shortly after graduation, he became acquainted with Nixon through the father of a guy he'd played baseball with in high school. The ex-teammate's dad had traveled and fished with Nixon decades earlier for Red Man events and the like.

They got along well while partaking in card games and such, and Nixon asked him if he'd like to be his travel partner for the Southwestern Series. When Cifuentes expressed an interest in fishing the Tour as a co-angler the next year, Nixon encouraged him to jump in.

Both compiled 1,007 points during the 2015 Tour season and qualified for the Forrest Wood Cup. Nixon partially credited Cifuentes' youthful enthusiasm and stamina on practice days for his own strong showing that year.

Nixon said Cifuentes has the game to compete as a pro.

"He's good in all phases, really – spinning (gear), casting and flipping," he said. "Power-fishing is probably his strongest suit."

Cifuentes has yet to put his college degree to use and hopes he never has to. He's unmarried and operates a small farm, raising 40 head of cattle, and also does some odd jobs (landscaping and whatnot).

"I fish as many tournaments as I can starting in the spring and in the off-season I just hunt deer and ducks," he said. "I got hooked on fishing when I did the college thing, and then when Larry asked me to fish with him, I didn't care about any of the school stuff anymore. This is what I love and it's what I want to do for the rest of my life."

He and Nixon will work together and share practice information for the Tour events. He's buoyed by the preliminary idea that most of the derbies should provide some shallow-water options.

He certainly has no trepidation about Beaver – a fickle body of water that's detested by many Tour pros. Fishing from Mark Rose's boat, he boxed more than 17 pounds there on day 2 last year en route to the co-angler win. His bag was about 3 1/2 pounds heavier than the one Rose caught that day.

"It was one of those deals – (Rose) had me around the fish and I guess I just threw the right baits at the right time."

If he has to do any sight-fishing this year, he'll employ some tactics that he learned from John Cox. He fished with the reigning Forrest Wood Cup champion twice in tournaments over the past 2 seasons and also served as his marshal on two occasions after the co-angler portion of tournaments had concluded.

"Bed-fishing is one of my weaknesses and it's something I'll have to get better at, no doubt. I watched (Cox) do some things I've never seen before.

"He told me not to tell anybody about them, and I haven't. But I am going to use them."