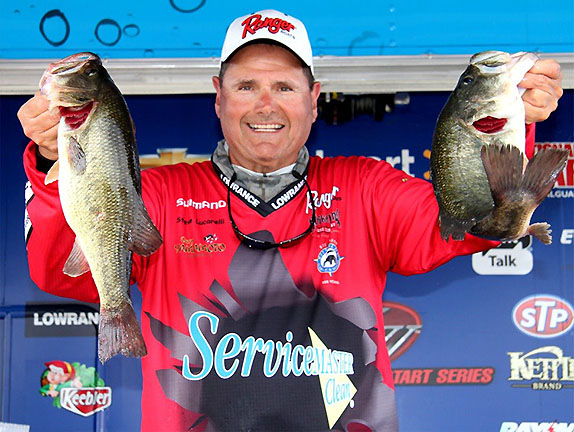 Steve Lucarelli has been a fixture on tournament circuits in the Northeast for three decades.

Funny how memories overlap. Take Steve Lucarelli, an accomplished tournament angler from New Hampshire who looks back over his 30-plus years of tournament competition and points to Lake Champlain as both the site of his biggest accomplishment and the place that planted a seed of inspiration for an invention that we’ll get to in a moment.

In August 2009, Lucarelli topped the Costa FLW Series Northern Division event on Champlain after edging out his son and team tournament partner, Joe, by just over a pound. A little bittersweet, but an overall pleasant memory.

“I really wanted him to win,” the elder Lucarelli said of Joe’s runner-up performance.

Another Champlain memory – this one more cumulative in nature – put Lucarelli on the path to creative inspiration.

Everyone knows about the vast Ticonderoga grass beds at the narrow southern end of Champlain. Like most who’ve fished the area, Lucarelli frequently struggled with navigating through the thick milfoil forest, which frequently chokes out trolling motors and requires anglers to lift and clear.

No biggie, that’s part of fishing.

For years, Lucarelli agreed, until he realized it didn’t have to be that way.

Flash forward to 2014 and he’s at home tinkering about when all those years of grassy frustration align in subconscious connection to stimulate a grand “What if?” moment.

Spoiler alert: Lucarelli’s epiphany yielded the Ninja Grass Blade (www.NinjaGrassBlade.com) – an aluminum accessory that mounts to a trolling-motor housing and slices through aquatic vegetation. The blade’s a little shorter than an actual katana, but it doesn’t require a two-handed sweep.

“I was in my garage and there was a piece of bar stock aluminum; I looked at it and I thought I’d try something,” Lucarelli said. “It just so happened that the wooden mallet I was going to use was the same radius as a Minn Kota trolling-motor housing.

“So I used the mallet to shape the piece of aluminum, drilled a couple of holes for the epoxy I was using at the time and the whole thing probably came together in an hour and a half.”

Now, the concept-to-prototype period may have been brief, but Lucarelli had serious plans for his creation, and serious plans require serious effort. Here’s a snapshot of key points in the process leading up to Lucarelli’s receipt of a patent for his invention in April 2016.

The deep, clear New England lakes Lucarelli commonly fishes have little vegetation and certainly not the prop-clogging salad of Champlain, which he samples only a couple times a year. So he enlisted the help of some Florida pals, who turned the Ninja Grass Blade loose on those thick reeds known as “hay fields.”

“They went through that hay with milfoil and hydrilla,” Lucarelli said. “They sent video and it was unbelievable. You couldn’t stop the prop. 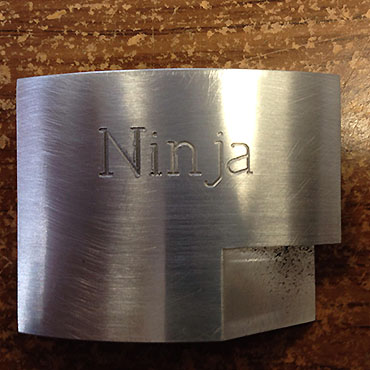 “I tested it myself at Ticonderoga in that milfoil. I drove right through to the other side and it never stopped me. I turned around and went halfway through and stopped to see if I could choke the propeller. The weeds were all matted around the shaft and all around the trolling motor, but it did not stop me.”

That, Lucarelli said, is why he invented the Ninja Grass Blade — to eliminate the need to lift and clear and thereby increase angling efficiency.

Lucarelli’s quick to state that his invention is nothing fancy, nothing complex; but the simplicity is the beauty. It’s also not the first patented product to address the issue of grass clogging trolling motors. But, as the saying goes, he built a better mousetrap.

For example, the product that Lucarelli produces through NGB, LLC has no exposed blade, therefore it eliminates a potential hazard present in another patented item. Also, armed with a detailed package of product descriptions, photos, sketches, etc., Lucarelli’s patent attorney conducted the requisite search and filed the appropriate paperwork to protect the Ninja Grass Blade for a period of 20 years.

Prudent study of the U.S. Patent system, Lucarelli said, allowed him to identify the areas of opportunity, as well as the long-term considerations like annual maintenance fees to keep patent protections enforced.

To aspiring inventors, Lucarelli offers a few pieces of advice. First, conduct a simple online search to familiarize yourself with currently patented products, their descriptions and designs. Second, use an official patent attorney who can effectively navigate the often nebulous course.

Lucarelli’s final insight addresses what is very likely the most important element of a product’s reputation – customer service.

One of the Ninja Blade’s chief selling points is the attachment method – an essential element not only in product development, but also brand building. Lucarelli’s initial design included three holes through which a plumber’s epoxy was inserted, but the small quantity of adhesive needed for attachment made it difficult to justify including a tube with the product.

He eventually sourced a mass supply that he could divide into individual quantities for product packaging, but the challenges didn’t end there.

“There was about a 2-3 percent customer service problem because some people were intimidated by mixing and using the epoxy,” Lucarelli explained. “It was like molasses and it would run, so you had to tape it.

“Because they weren’t comfortable with epoxy and letting it set up, there were problems with the product falling off. Also, because the epoxy was so brittle, the impact of lifting your trolling motor 100 times in a day – or 1,000 times in a week, if you’re a professional – eventually, the product was coming off.”

Out of several hundred units sold with the original epoxy-mounted design, Lucarelli said he had about 20 to 30 reports of Ninja Grass Blades detaching. Such realities can steer new companies right off the cliff of public excoriation, but they can just as easily spur fledgling operations to the improvements and PR victories that help establish a sustainable reputation.

On the practical side, he altered his design by nixing the epoxy holes and packaging the Ninja Grass Blade with 3M double-sided waterproof tape that has simplified installation and significantly improved reliability.

On the public relations side – how about a big shot of endearment.

“I handled this the right way. When I treated the people the way I want to be treated when I reach out to a manufacturer, they expressed (praise) because of the customer service I provided by replacing the products. I was very pleased with that.”

Available through Tackle Warehouse and local retailers, the Ninja Grass Blade sells for $30. So, now that Joe’s running one on his boat, will we see a little score-evening one of these days?

Safe bet, Steve would be the first to applaud.