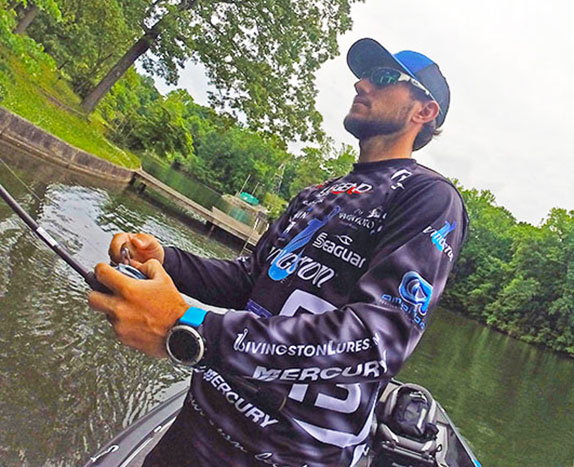 Stetson Blaylock is having a stellar all-around season with seven finishes of 45th or better.

As Kei Blaylock did laps around the tables inside the dining room at Swampers Bar and Grill at the Marriott Shoals Hotel and Spa, Stetson Blaylock had a decision to make.

Does he get up and stop his 3-year-old son from having a little bit of fun and burning off some restless energy inside a near-empty hotel dining room or leave him be and trust that he’ll wear himself out?

Blaylock glanced over at his wife, Lindsay, who had her hands full with the couple’s 4-month-old daughter, Linnie, and smiled. Kei got to run wild for a few minutes.

The Mother’s Day evening dinner crowd was thin, save for a few pro anglers and fishing writers in town for a press event hosted by T-H Marine Products. Blaylock soaked it all in. Here he was, surrounded by his family, fresh off a Top-20 finish at the Pickwick Lake FLW Tour and looking ahead to the Douglas Lake Southern Open, arguably one of the most important tournaments of his career.

After a couple days at Wilson Lake, Blaylock and family blasted off to east Tennessee, where he logged a 14th-place finish at Douglas to cap off a stellar Southern Open season. His 2nd-place finish in points (behind fellow FLW Tour pro Mark Rose) guarantees he’ll receive an invitation to the Elite Series for 2017.

For the 28-year-old Arkansas native, the 2016 tournament season could not have started any better. He’s competed in seven tournaments so far, including Douglas Lake, and not finished worse than 45th in any of them. He’s presently 7th in FLW Tour points with two events remaining; he’s just 61 points behind leader Jeff Sprague, so a late-season run at Angler of the Year is certainly not out of the question.

“I feel like each year I have gotten more consistent at making the right decisions,” Blaylock said. “It’s something you just learn over time. You’re always going to have a bad year. It’s just bound to happen. I look at guys that have been consistent over their career and one that stands out is Clark Wendlandt. He’s one of the best there is and he’s had a year where he was third to last or something like that in points. I’ve fished fairly clean (this year), but I know I could’ve done better in each tournament.”

While he rattled off a few reasons related to his on-the-water game that he attributes this season’s success to, Blaylock is quick to point out that having his family by his side at every event has been a major contributor to his performance.

Having Lindsay and their two children on the road gives him the feeling that he’s at home no matter where the tournament is taking place.

“Having my family at each event has been great,” he said. “It’s a lot more work, but it gives me more drive during practice and tournament days. It’s two vehicles, a camper and a boat at each one. It’s a lot, but it’s nice having a home on the road. It puts me in a groove knowing everything is the same and that I’m not going back to some hotel room. The consistency of it is important to me.”

And that sort of consistency has led to consistent finishes all season. After a 45th at Lake Okeechobee and a 36th at Lake Hartwell to start the FLW Tour season, Blaylock took 9th at Beaver Lake and 16th at Pickwick. In the Southern Opens, he took 6th at Lake Toho and 7th at Lewis Smith Lake before heading to Douglas.

He’s never been a huge believer in momentum in fishing, but it’s hard for him to ignore its impact on his performance this year.

“My experience has been the opposite of that,” he said. “The year I finished 2nd in points (2013), I had a good event then a bad event, then a good event. I think momentum is a good thing and I do think it helps my confidence but fishing is all about decisions and making good decisions. We’re at a time of year where momentum is what you decide to do in the morning because fish are moving offshore.”

Still Work To Do

Blaylock was ticked off that he didn’t win at Douglas. He put in over a week of practice and came into the event thinking he had a solid shot at contending for the win. He was disappointed about missing the Top-12 cut and losing the AOY title to Rose, but he felt a giant relief when it was over.

He admits it took him a few days to simmer down before he could savor his accomplishment of qualifying for the Elite Series.

“Even though I missed the cut by 4 ounces – in my mind I was ticked off I missed the cut – I had to take a deep breath and soak it in because it’s one less thing I have to worry about now,” he said. “It’s taken a week or so to sink in. It feels really good. Nothing’s a guarantee in this sport, but it feels awesome to be in the middle of May and to already know I have that option. There’s a lot of fishing left that’ll be a lot less stressful.”

Having clinched an Elite Series berth for next year won’t impact how he approaches the final two Tour events – at Kentucky Lake and Lake Champlain, both venues he’s competed at before.

“I think I’m going to fish exactly how I’ve fished all year,” he said. “It’s not pressure-free, but stress-free. I’ve always had the goals of making the Cup and to win Angler of the Year and I feel like I have a chance at one for sure and AOY is not out of the question. There’s a lot of fishing left in these two events and a lot of things will change, especially at Champlain.”

He’s prepared to correct some mistakes he’s made in the past at Kentucky Lake.

“I’ve been there enough to know the areas that have bigger fish,” he said. “I just have to make the right decisions. If I do that, I’ll be there at the end.”

Champlain hasn’t been kind to him in recent Tour events, but he narrowly missed a Top-20 finish at the Northern Open in 2014.

“I have an idea of how to fish there,” he said. “It all depends on how Kentucky Lake goes, though. If I stub my toe and have to make up ground, then it’s all about fishing my strengths. I’ve done that all year and it’s paid off.”

What the Future Holds

While Blaylock is keenly focused on the final two Tour events and the Forrest Wood Cup in August, he also has an eye on the future. This year’s ICAST figures to be an important one for him as he gauges his sponsors’ feelings about the 2017 season.

“I have to have conversations with companies I work with and companies I lost because I didn’t fish the Elites,” he said. “I look back at last year when I was 9th in points and basically the last guy out and it was the end of November before I got a definite “no” from B.A.S.S., so having that extra time will be critical.”

He said he’d “kick the idea around” if the 2017 Elite Series and FLW Tour schedules allowed for qualified anglers to compete on both circuits.

“The more you’re fishing, the more opportunities you have to make money,” he said. “It’s something that’ll be on my mind.” 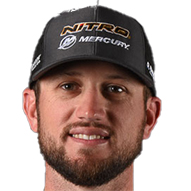