BACK
Race For 2nd Is On 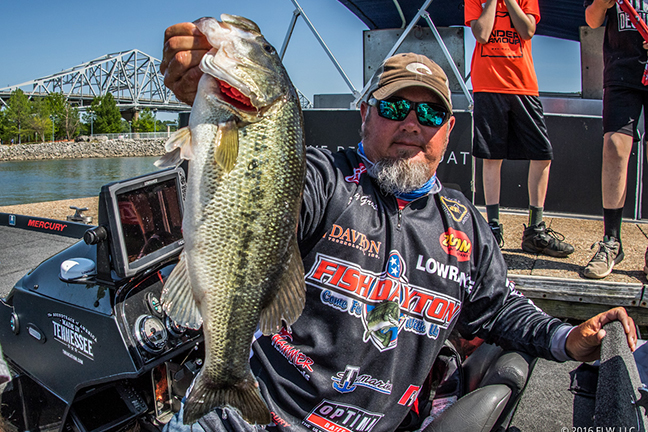 Buddy Gross is on pace to register his first career FLW Tour win.

Last Sunday, Buddy Gross made his first ever cast on Pickwick Lake. Tomorrow, there’s a high probability that he’ll leave Florence, Ala., with a big, shiny trophy and a check for $100,000.

After sacking another impressive stringer that weighed 22-12, his 3-day total of 69-07 has him nearly 15 pounds ahead of the next closest competitor entering the final day. He’s the only angler to crack the 20-pound mark twice, let alone all 3 days, this week.

“For years I’ve watched many of the anglers in this field catch fish on television, so to be heading into day 4 with the lead is a dream come true,” Gross said. “The Lord has truly blessed me at this event.”

While everyone else scratched and clawed for everything they caught today, Gross has been able to consistently catch the kind of quality fish Pickwick is known for. If he can maintain his sizable lead and close out the win, it’ll go down as one of the more lopsided victories in FLW Tour history.

While the race at the top appears over, there will be plenty of ounce-counting in the bottom half of the Top 10 tomorrow. Just 1-10 separates Wilson from Stephen Patek in 10th.

Here's a look at the Top 10 entering the final day, with deficit margin from Gross indicated by red numbers in parentheses:

Patek and Andy Morgan both wound up with 42-15, but Patek won the tiebreaker for 10th place since he was ahead of Morgan after day 2. It’ll be Patek’s first career GTop-10 finish.

Rick Cotten had just one fish today and fell from 6th to 18th. Beaver Lake champion Scott Canterbury had three fish and fell from 7th to 13th while Jeff Sprague retreated from 8th to 14th, but will still leave Alabama with a 2-point lead over John Cox in the Angler of the Year points race.

With the post-spawn fish continuing move out to their summer haunts and a persistent west-northwest wind combined with a relative lack of current, the fishing has not been stellar this week compared to Pickwick events of the past. There were several anglers in the Top 20 who fished shallow exclusively all week, but the bigger fish are being caught offshore, either during feeding frenzies while shad are spawning or off key pieces of structure out toward the ledges. 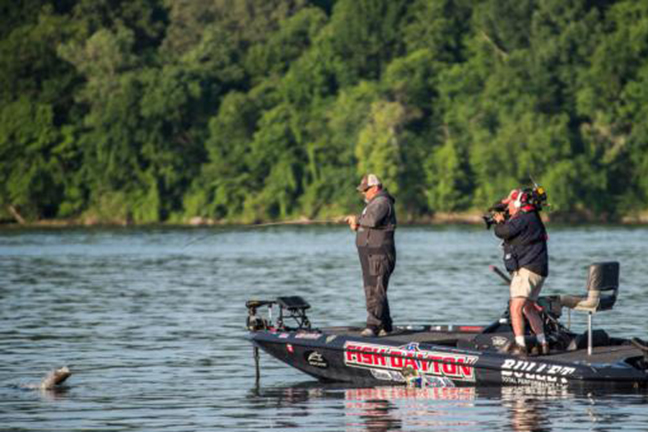 
Gross fights a keeper back to the boat this morning.

Gross Prepared For a Grind

Gross says being in the lead for a third straight day is a pretty surreal feeling, but he’s not taking anything for granted – even with a lead of more than 14 pounds over traveling partner Neal.

“It hasn’t sunk in yet. I’m afraid it’s not real yet. I feel like it’s still day 1,” he said. “This might sound cheesy, but I know it’s not over until the fat lady sings. I know I have a lead, but I also know Michael can catch them. And so can Jamie. I need 15 to 20 pounds and then I’ll feel comfortable.”

After catching a couple solid fish right off the bat this morning, he caught two more 15 minutes apart. After another hour, he left his best spot and lost a good one on a spinnerbait at his next stop. He eventually moved to another area that he feels could be as good or better than where he’s been catching them, but a local was fishing it.

He eventually finished his limit and didn’t make a meaningful cast after 11 o'clock.

The key all week has been some patches of eelgrass that he found.

“It’s rare for here, but the shad are spawning on the eelgrass that’s in 8 to 10 feet of water,” he said. “It’s up 4 feet off the bottom and the big ones are sitting next to it in the morning and they’re grouped up. If I can cast close enough to the eelgrass, I can get bit and when it’s over, it’s over.”

His key producers so far have been a scrounger-style jig with a Zoom Fluke as well as a bucktail jig that he’s able to fish through the eelgrass. He said he’s fishing very similar to how he would on Guntersville or Chickamauga this time of year.

“Other than the hair jig, which is kind of new to me, the scrounger deal is 100 percent what I do this time of year on ledges,” he said.

He said he could’ve sat on this best areas today and continued to fish hard, but knowing he already had 20-plus pounds in the boat, he wanted to back off and see what they will produce tomorrow.

“Today, I could have (fished them all day), but I had 22 pounds and quit,” he said. “Tomorrow, I’m not going to quit. I just hope to catch them. I know it might look easy, but it’s not. If I don’t get two or three right away it’ll be a grind all day long.” 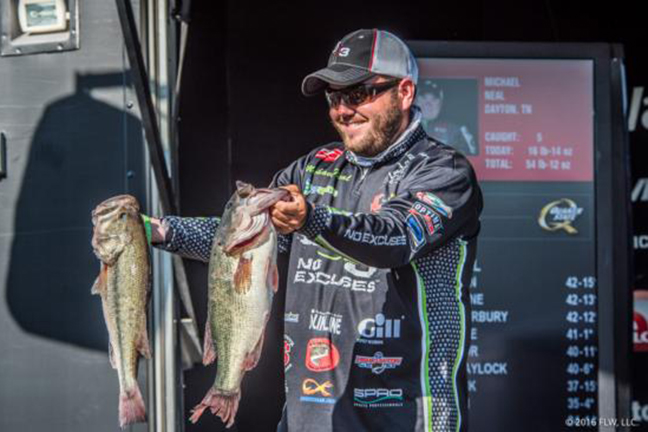 
Michael Neal had to wait about an hour this morning before being able to fish his best spot.

The first hour of Neal’s day did not go as he’d planned it.

“The first three spots I wanted to get on had boats on them and on the fourth one I almost got run over by a barge,” he said.

He eventually was able to get on the spot he wanted to start on and caught his three best fish of the day there. He knows there are more there, but can’t seem to trigger more than a three-fish flurry.

“It’s where my best ones have come from every day, but I can’t get five to bite,” he added. “There’s a 30-pound bag down there. I caught a 7 and multiple 6s – that’s the caliber of fish there. It’s just a matter of getting five to bite in one day.”

It’s a unique spot that he’s been unable to pinpoint why the bigger fish seem to be attracted to it.

“My best place I can’t explain,” he said. “Every other place I’ve caught bass offshore in my life I can tell you why they’re there, but this place I have no idea and they’re all big. I rode that all week and I’m just picking up an extra fish here and there to fill a limit.

He’s going to treat Sunday like a one-day shootout event.

“I’m going to act like everybody is on a clean slate and catch as much as I can catch,” he said. “Anything’s possible.”

Horton set a modest goal for himself today, which was to catch 13 pounds. He figured that would secure a Top-10 berth.

He then slid out to a deeper spot where he’d caught a 5-pounder Friday and within 30 minutes had a 5-pound kicker to finish off his limit.

“I fished it hard,” he said. “There were more fish there, but they wouldn’t bite.”

His key bait on the deeper fish has been a Strike King 10XD crankbait.

“These aren’t post-spawn fish that just swam out there,” he noted. “They’ve been out there a while and they’re a little different. If they’d run some water and the wind would quit, all they would have to do is swim up 5 feet and they’d be easier to catch.”

“I’m going throw that spinner in the morning and hope to catch some 4s and maybe a limit,” he said. “That’d be great. Then I’ll move out and try to catch a big one deep. Second would be great, but third would be lovely, too.”

4th: Suggs All About the Shad Spawn

The shad spawn has been crucial for Suggs all week and it was again today, but it happened on different spots from where he’d been catching fish.

"I was in a struggle today,” he said. “I wound up going back trying to find the shad spawn and I found a huge one. I had some blow-ups, but only caught one keeper. I moved to another location and found another shad spawn and caught three there.”

He has one deep spot that he started on today and he plans to start there on Sunday because of the quality that he’s caught there.

“I feel like I have to start there because I’ve weighed in three around 5 and a 6 off of it,” he said. “It’s just a high shell bed on the river ledge and the shad are spawning on it. They weren’t there today or Friday so that spot may be done, but I have to go see.

“I didn’t have a great day today, but I am fishing tomorrow. They didn’t pull any water and it really stunk for me.”

Still, he’s happy to be fishing the final day for the first time since Beaver Lake in 2013.

“I had some days in practice that I felt decent about and some I felt terrible about,” he said. “To catch what I’ve caught so far, it’s been a shot in the arm. I’m pleased.” 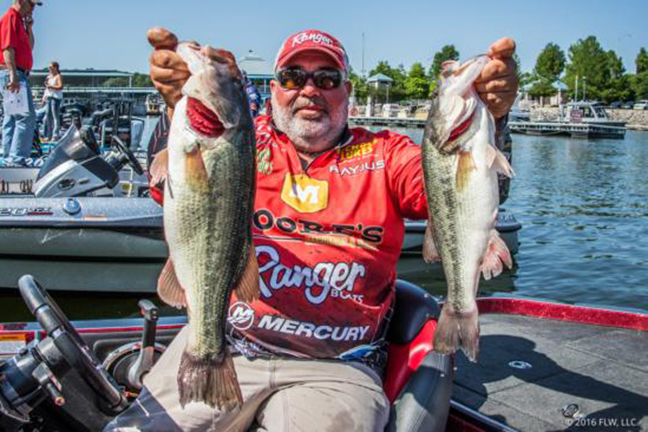 
Jamie Horton is looking for his second top-3 finish of the season tomorrow.

5th: Wilson Has Area Dialed In

The area where Wilson has been catching his fish is largely unaffected by the wind and the current, but there is a healthy population of both largemouth and smallmouth and that’s what’s kept him there all week.

“It’s a place I know and tournaments have been won there before,” he said. “It’s just a flat with a lot of boulders and shell beds on it. The largemouth pull in there and spawn shallower and the smallmouth are spawning out deeper.”

The first 2 days, he caught predominantly smallmouth while today was all green fish aside from one smallie that jumped off.

“I had to go shallower today,” he said.

“It’s such a huge area that I have to zigzag and do laps around it,” he said. “It seems like the bigger fish have been out a little deeper in 7 or 8 feet, but today they were all in 3 to 5 feet. The only reasoning I have is we had bluebird skies and high pressure and the smallies were not biting at all. I went shallow for largemouth and caught what I did.”

> Randy Haynes came into the day in 9th place, but encountered mechanical issues not far from check-in and had to get a ride back from an FLW boat. Because he arrived at check-in in an ineligible boat, his day-3 weight was erased due to a violation of FLW Tour rule 13, which states in part that anglers who experience mechanical failure can only receive a tow in or a ride in from another tournament competitor.

Haynes didn’t appear on stage, but estimated his bag was in the “low 20s.” That would’ve been enough to qualify him for the final day and possibly move him into The top 3. Instead, he finished 20th.

“I knew I was going to cut it close and I hit a boat wake wrong and spun the hub on my prop,” Haynes said. “That’s the way the year has gone for me.”

The following anglers did not make the cut and will not compete on day 4.