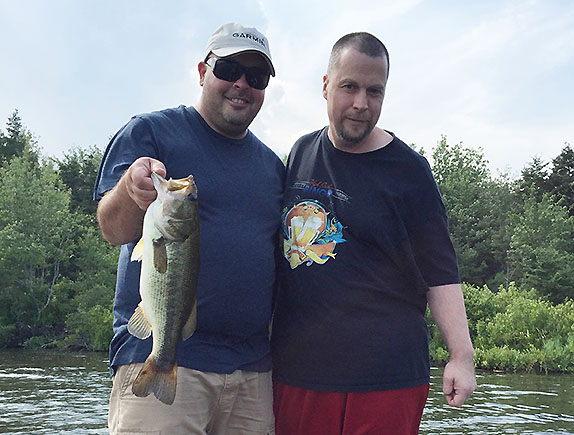 Rob Lever (left) operates We Love to Fish – a program that provides intellectually disabled adults with a fun day on the water.

A lot of anglers spend a lot of time on the road, but for Rob Lever, it was a particular road that led him to the hugely impactful role he now plays in the lives of some special folks.

For the past 5 years, the New Bedford, Mass. resident has operated We Love to Fish — a program conceived and created with the simple, yet deeply meaningful objective of providing intellectually disabled adults with an enjoyable day on the water.

A self-described “rabid angler” with a local tournament background, Lever says he’s found the passion and purpose we all seek through his benevolent work. It’s an interesting and inspiring concept, but first, let’s look at how he got here.

Coming from a corporate IT background, Lever decided he needed a change from the daily grind. Seeking something more meaningful, he went to work for Road to Responsibility (RTR) — a Boston-based non-profit serving intellectually disabled adults.

“I used to bring my boat to work every day and when I did, a bunch of guys in the program would always ask to go fishing,” Lever said. “That’s really how We Love to Fish was born.

Acting on the inspiration, Lever drew up a plan of action and presented it to the agency’s CEO.

“I had only been at RTR about 4 months at this point,” he said. “I didn’t know any of the upper management; I just knew that I wanted to take these guys fishing.”

With his concept well-received, Lever worked with upper management to draw up some parameters and launch the effort.

Notably, his first trip – a May outing to a small southeastern Massachusetts pond – could very well have sunk the program. But instead, it reinforced Lever’s belief in his vision.

“It was a brutal day; it was pouring, thundering and lightning,” he recalls. “I had never had any experience with any of the population with the various disabilities that I work with now.

“We were sitting at the launch and I was totally freaking out. I kept asking him, ‘Do you just want to go in?’ But he looked at me and said: ‘I want to fish.’”

Off they went and within minutes, the rain ceased, the sun came out and two anglers – two friends on a boat – caught fish.

It felt like one of those “meant to be” moments, Lever said.

“It was magical; I could not believe I was watching this gentleman catch fish. If you saw him and judged him on the outside, you’d think there’s no way this guy could go out and fish.

“His reactions were very slow, but he had a very good sense of humor and he was in it to catch. I think he caught about 30 fish that day.”

Now, Lever spends about half of his year attending to his duties as Road to Responsibility’s communications director and the rest hosting guests through a more formalized version of We Love to Fish, which officially operates through Road to Recovery. April through October finds him on the water 5 days a week, weather permitting.

He currently takes no salary from the fishing side, but RTR assists with funding and logistics. Lever also coordinates a “Support Team” comprising industry sponsors such as Duckett Fishing, along with non-endemics and private contributors.

Pure Fishing provides each We Love to Fish guest with a rod and reel to take home.

Why He Does It

We Love to Fish caters largely to adults with autism, but across the spectrum of intellectual disabilities, Lever sees what he considers an unfair perception – one that he banishes from the deck of his boat.

“I work with only adults at this point and all of them have bounced from group home to group home, or program to program,” Lever said. “Most people treat them for their disabilities. They’re very clinical; you have very educated people that have the steps to make sure these guys are happy. 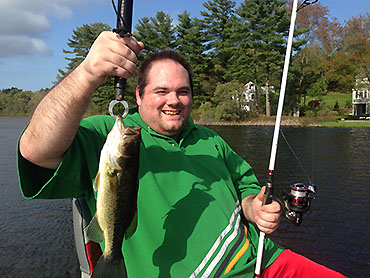 Catching fish has proven to be therapeutic for developmentally disabled adults who participate in the We Love to Fish program.

“Because I’m not trained in that, I’m just the big dumb animal on the boat that just wants to have fun. It’s really worked because for the first time in their life, they have someone who does not care that they have a disability. I truly don’t care. We’re there to have fun and we’re there to fish.”

Lever said he makes it a point to avoid treating his guests like they’re disabled. After all, neither will their opponent.

“Those fish don’t care; they’re not going to go hit the line just because they feel bad for the guy,” he said. “So, in fishing with these individuals, they are truly in a level playing field.”

“I’ve seen that, especially individuals with autism, they get into sensory overload,” Lever said. “But you get them on a boat and they take a deep breath and they just calm down.

“That’s really what we’re seeing this program is doing for this population. What I’m trying to do is build a therapeutic option for them.”

While he’s certainly thrilled about how We Love to Fish continues to impact the individuals he hosts, Lever said the friendships he’s made and the soul-filling joy he’s experienced is simply invaluable.

“Most people, when they see the program, think that the guests are getting the day of fishing and the camaraderie that comes with fishing, but I’m learning something every day,” he said. “Ten years ago, I was not the type of person who would’ve ever been in a program like this.

“If it were not for this program, I don’t think I’d be – professionally and as a human – where I am now. I love these guys. I’ve integrated them in my life.”

Lever occasionally expands beyond the day trips to weekend fishing excursions with a handful of We Love to Fish guests.

One of his regulars dabbles in woodworking and made a jewelry box for Lever’s daughter. Most recently, the man made a special Christmas delivery – a handmade, Santa-topped snowfall measuring stick.

It’s stuff like this that makes the fishing take a comfortable backseat.

“What I’ve really learned is that I’ve opened myself up to the relationships that these guys give me,” Lever said. “These guys are like my family. I currently have 150 individuals involved in the program and every single one of them is my friend.”

To get involved with We Love To Fish on a personal or corporate support level, click here. You never know whose life you might impact – possibly your own.