BACK
1st Elite To Win Back-To-Back 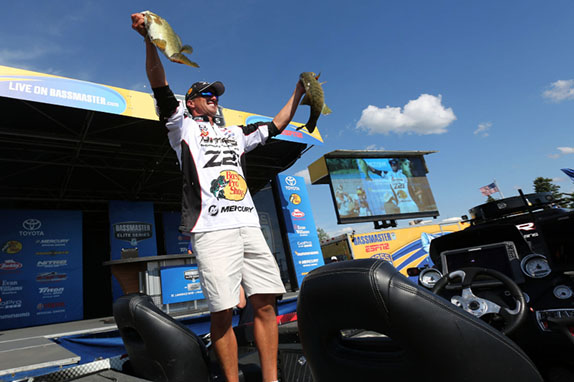 Edwin Evers shows off two of his better smallmouth from Sunday.

BassFans have seen hot streaks before in the pro ranks. Kevin VanDam has had too many to count. Skeet Reese was on fire for much of the 2010 season. David Dudley was almost unstoppable in 2012. Jason Christie had a memorable stretch in 2013.

There were others before – Denny Brauer or David Fritts, anyone? – and still others will follow, but right now, there’s no one more dialed in to what it takes to win than Edwin Evers.

The 40-year-old Oklahoma native, the same guy who finished 94th at the Sabine River back in March, is in the midst of one of those spine-tingling runs that psychologists study to determine if the “hot hand theory” in sports really is true. In May, he took 3rd at Lake Havasu, then followed that up with a win at BASSFest at Kentucky Lake.

Today, Evers left the door open for his challengers by catching a modest 17-08 stringer, but it was more than enough to close out the win at the St. Lawrence River Elite Series with a 4-day total of 77-10. He put himself in some select company in the process. Not only is he the first to win consecutive Elite Series tournaments in the circuit’s 10-year history, he joined Kevin VanDam (six) and Skeet Reese (five) as the only anglers with five Elite Series trophies.

“I cannot believe it,” he said. “I’m so humbled. It’s amazing. It hasn’t sunk in yet. Someone needs to pinch me. Am I sleeping? Am I dreaming? I’m just in shock. It’s a huge blessing for me and my family and it’s something I will never, ever take for granted.”

Evers is now 4th in Angler of the Year points and could pose a late-season threat to the leaders if his hot streak continues at the Chesapeake Bay in 11 days. It’d be hard to bet against him at this point.

“You better not,” he said. “I’m going to catch them there. I already rigged up everything before I came up here.”

Alton Jones notched his third career Elite Series runner-up finish, catching 16-07 to finish with 73-15. Reigning Angler of the Year Greg Hackney had his best showing of the season, rallying from 11th to finish 3rd thanks to a bevy of largemouth. His 19-00 bag was the day’s best sack and he closed with 72-11.

Here's a look at how the remainder of the Top 12 finished up:

As the tournament wore on, it became apparent the shallower areas were more productive as the offshore river haunts typically inhabited by big groups of brown fish weren’t worth targeting. The fact that Evers won the tournament in 2 to 10 feet of water – other finalists fished just as shallow – speaks volumes about how far behind the seasons are up north.

There were deep fish available, but not nearly in the numbers that were there 2 years ago. Largemouth also played a much bigger part in the outcome this time around as competitors found certain areas held numbers and quality green fish.

The circuit gets a week off before visiting the Chesapeake Bay from Aug. 13-16. 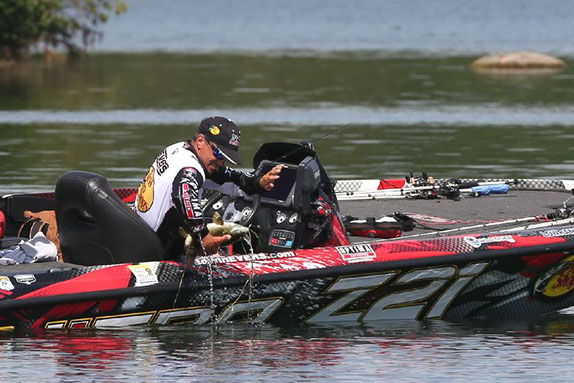 
Evers caught a three good smallmouth during the middle of the day that gave him the cushion he needed to win.

Evers said he was starting to sweat a little as the noon hour approached today. He’d gone through some key areas and hadn’t caught much in the way of quality.

Then he picked off a good smallmouth. A while later, he caught another. He capped off a two-hour span with a third decent smallie, but when he glanced at B.A.S.S.’s unofficial BassTrak standings early in the afternoon, he realized he was still in the hunt.

“I said, ‘Crud, I’m still in this thing.’ I thought I’d be down the list,” he said. “I knew then I could win it. I was pressing to get something going and catch as much as I could. It ended up that I had enough.”

He opted to fish east of Waddington this week and considered the area he focused on – a 15-mile stretch – a whole new body of water since he’d fished toward Lake Ontario all practice and through the tournament back in 2013.

“I felt like this year, with us coming back, everybody was going to try to go that way and get as close to where Brandon (Palaniuk) won as possible,” he said. “I went the other direction and it was hard because I only had seven bites the first day (of practice) and four the second and seven the third, but I was seeing a lot of fish. When I came back Thursday and slowed down. I was able to catch them.”

When asked to rank the significance of this win compared to his other four Elite Series triumphs, he said it was too soon to put it in proper perspective.

“It’s overwhelming,” he said. “I won a smallmouth derby shallow. I’ve never done that before. That’s exciting for me. I’ve never won two in a row before. I’ve had stretches with like five Top-12s in a row, but winning means more to your sponsors. If you finish 2nd, 3rd or 4th, it’s harder to promote that. Winning just carries more weight with sponsors. It’s just surreal.”

There was no one magic bait this week for Evers, who said he relied on as many as six different presentations to either draw fish out where he could get a visual mark on them or to put them in the boat. His main tactic was throwing a Megabass X-80 jerkbait or a 4-inch Megabass Spark Shad in shallow water and if he couldn’t catch them that way, he’d throw back with a wacky-rigged Zoom Fluke Stick or a Zoom Z-Drop rigged on a dropshot.

Additional details of Evers’ winning pattern and those of the Top 5 finishers will be published soon.

Like Evers, Jones has spent much of this season trying to recover from a poor showing at the Sabine River (92nd). The runner-up finish, the third of his Elite Series career, will go a long way in that effort as he’s moved into the Top 20 in AOY points.

“I’m happy with second,” he said. “When you go in with a chance to win and it doesn’t happen, it still stings a bit. It’s so hard to win out here and when you get a chance to walk through that door, you try to do everything you can.” 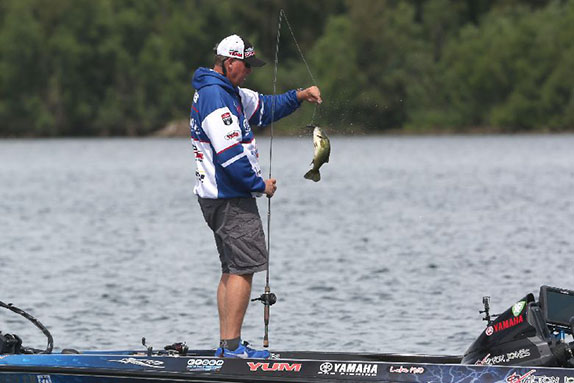 
Alton Jones had to resort to some largemouth today to finish out his first limit.

He felt like he’d exhausted his smallmouth areas today and targeted largemouth for a time to fill out his limit. Once he did that, he went back to drifting a dropshot and made a 2-pound upgrade with a smallmouth later in the day.

“I panicked a little around 10:30 this morning and went after largemouth,” he said. “I had to get my head straight. I felt myself getting flustered, but that got me settled down.

“I needed points really bad and I’ve been clawing my back into it slowly. This helps give me momentum in my push to the Classic.”

In his last two trips to New York, Hackney has a pair of Top-3 finishes – he won at Cayuga Lake last year – and his latest effort was impressive in that he weighed all largemouth the last 2 days and continued to climb the leaderboard.

“Any time I get the opportunity to fish a good place, you get up for it,” he said. “The fishing is always good up north. It was off, but it was still awesome. Northern bass fishing, whether you’re fishing for smallmouth or largemouth, is really incredible.”

He said the scenery wasn’t bad either.

“It’s not often I fish by a place and look up and see a castle on the bank,” he added.

He more or less split the first 2 days of the tournament between smallmouth and largemouth, but focused mainly on the green variety on the weekend. His largemouth area was great for numbers and had several big ones mixed in.

“I went back to my largemouth area today thinking that I’d catch what I thought I needed and then go smallmouth fishing,” he said. “When I caught my fourth fish, it was a 5-pounder so I just kept grinding. Every now and then you’d catch a good one and when I got to 18 (pounds) I figured I’d might as well stay.”

A yet-to-be-released hollow-body topwater bait from Strike King called the Poppin’ Perch was the key to his largemouth success early on, as was a KVD Sexy Frog. Today, all of his fish were caught flipping a creature bait on a flat covered with milfoil.

“That place I found was special,” he said. “They were really concentrated on one area of good grass that had a depression on it. Every fish was concentrated in that hole. That’s typical for northern largemouth. Either you’re fishing for isolated bass or they get grouped up like that.”

Card committed to largemouth for most of the tournament and racked up his career-best Elite Series result catching fish on a frog and punching matted grass.

“It’s been a great week,” he said. “I’m think I’m on the wedding pattern. We’ve heard about guys being on a baby pattern. There’s a wedding pattern going on. I feel really blessed and thankful for these last two tournaments.”

Over the last two events – he was 8th at BASSFest – he’s climbed 56 spots in the AOY points standings and is in 40th place with three events left.

He felt like he could’ve challenged Jones for 2nd today had he not lost multiple big fish late in the day.

He caught multiple 3-pound largemouth on a frog over the first 30 minutes, then things took a turn.

“It was just horrible execution the last 30 minutes,” he said. “I missed a couple 4s and on the last cast, I lost one that had to be a 4 1/2 or 5. Two of them were hooked and coming to the boat when they came off. Normally, on a frog when you hook them, it’s over. I weighed in one fish that was under 3 pounds so that one fish would’ve put me in 2nd.

“All in all, it was a blast. It was a fun week. It’s always cool to do something different and go against the grain.”

Reese missed the day-2 cut at the previous two events and he was 93rd at the St. Lawrence River 2 years ago so a Top-5 finish meant a lot to him this week.

“I knew coming in today I probably didn’t have a shot (at winning),” he said on stage Sunday, “but I’m pleased. It was a good week.”

He spent the majority of his tournament down near the mouth of the river on a vast flat with 6 to 8 feet of water on it. He threw a Lucky Craft Pointer 78 jerkbait most of the time.

“I got into an area that had a lot of fish in it,” he added. “There were literally hundreds upon hundreds of smallmouth swimming around. Unfortunately, there were not a lot of big ones.”