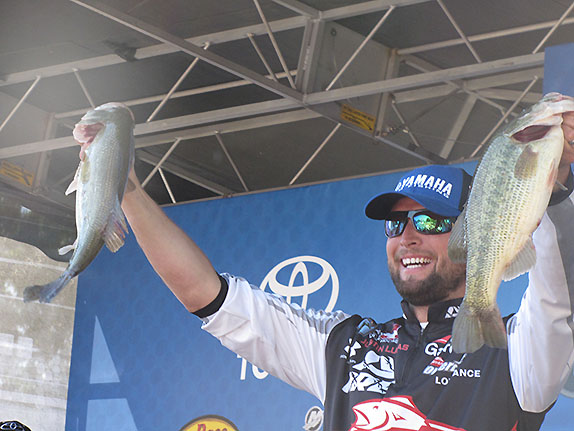 Justin Lucas opted to forgo his big-fish spots today in favor of an area he hadn't fished since practice.

The California Delta is where it all started for Justin Lucas. Fishing tournaments with his grandfather, Jack Schmidt, out of Schmidt’s boat and being able to man the wheel and run the trolling motor as a 12-year-old sparked the desire in Lucas to chase his dream of becoming a pro angler.

As he matured and started to climb the amateur rungs of the sport, he watched as fellow Californians found success as pro anglers on the national stage. He wanted badly to follow in their footsteps. Today, he stepped out of their shadows and continued down his own path with his first victory as a pro – in his hometown of all places, with grandpa Jack watching from the crowd.

Lucas celebrated his 29th birthday Friday, took over the lead in an Elite Series tournament for the first time on Saturday and then spent Sunday catching just enough 3-pounders off an area he’d been saving to hold off one of his childhood idols to capture the Sacramento River Elite Series.

He caught 16-00, his lightest stringer of the event, but it gave him a 4-day total of 82-14, which was enough to stymie Aaron Martens’ bid for a second career Elite Series win at the Delta. The Top 5 finishers all have California roots, which made Lucas’ triumph all the more special.

“It’s the most incredible feeling I’ve ever had,” Lucas said. “I grew up fishing the Delta and dreamed of being a pro bass fisherman. Watching [fellow Californians] Skeet (Reese) and Aaron and (Brent) Ehrler succeed and win, all I wanted to do was be like them and win a tournament.”

When Lucas made the transition from the FLW Tour to the Elite Series prior to the 2014 season, he brought with him five victories – all as a co-angler. He now has 10 Top-10s in just 22 career B.A.S.S. events as a pro, including six in Elite Series competition.

“This is my sixth year as a pro and I feel like the last two or three years I have gotten better and stronger as an angler,” he added. “I’ve been knocking on the door a couple of times, but I’m glad this was my first one. I’m glad I had to wait for it to happen here.”

Dean Rojas finished up strong, catching a day-best 18-11 to move up one spot to 3rd with 78-02. More importantly, he’ll be the leader in the Angler of the Year points heading into next week’s tournament at Lake Havasu in his backyard. Lucas moved into 2nd place, eight points back.

Here's how rest of the Top 12 finished up:

The finalists made one final trip up and down the Sacramento River on Sunday to the California Delta, which lived up to its billing as one of the best, yet most challenging, fisheries in the country. The tide swings, coupled with a segment of the bass population either spawning or just coming off the spawn, made for some finicky fish, especially for those focused on sight-fishing for those on beds.

While Lucas did catch a few of his fish off beds this week, he closed out the win Sunday flipping wood in an area of the west Delta. Details on his pattern and those of the other Top 5 anglers will be published later this week.

The Elite Series scene shifts to the Arizona desert next week as Lake Havasu plays host to a B.A.S.S. event for the first time since 2003. Practice for that event gets under way Tuesday, which will allow the finalists from the Sacramento River time to drive to Arizona and get settled in.

With upwards of 60 friends and family watching from the crowd today at Discovery Park in Sacramento, the last thing Lucas wanted to do was let them down by not catching enough to close out the victory. 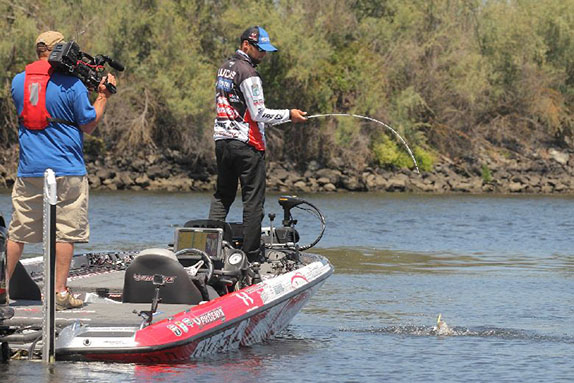 
Lucas didn't catch many fish today, but he managed to catch enough to close out his first win.

“I felt sick to my stomach on the ride back in,” he said. “It was like my eighth trip this week back up the river and I was just sick of it. It felt like the longest ride back in. It was not fun at all.”

He wasn’t convinced he’d won until his weight was officially locked in as the victor.

“I felt I was one fish away all day,” he said. “The only time I felt good about it was when Aaron shook my hand back stage.”

Going out with a 3-pound lead today allowed him to not necessarily have to focus on finding more bedding fish that may or may not have been in a biting mood.

“I was so happy to be in the lead today,” he said. “I know a lot of people don’t say that, but I was stoked because it changed my whole plan.”

He made a gutsy call to run to an area in the west Delta where he’d gotten a few bites in practice around some wood. He encountered some rough water this morning and took a 15-minute detour to get there, but once he started fishing, he had a good feeling.

He had 14 pounds within 30 minutes, all flipping, and culled a couple times throughout the day to get to 16.

“I’d been saving that area,” he said. “There aren’t any big ones there, but it just has a lot of 3-pounders. I knew I didn’t need them the first 3 days, but figured I would toward the end. Being able to catch 3-pounders is not always great at the Delta, but it was the best decision I made all week.”

Martens said his multitude of second-place finishes is starting to wear on him, but he knows if he continues to put himself in positions to win, they’ll eventually start to come more frequently.

“I’ve known Justin for a long time,” he said. “I’ve talked with Justin a lot, and he’s a super-cool guy. I wanted to win, but I’ll take second.”

After starting the tournament in the south Delta, he migrated north and spent the balance of the event there. He mainly sight-fished with a craw bait and a light dropshot.

“It was a good tournament,” he said. “I goofed up (Saturday) by working on a couple big ones for too long. Before you know it, time’s running out. I moved around a lot today and covered more water. I was going as hard as I could.” 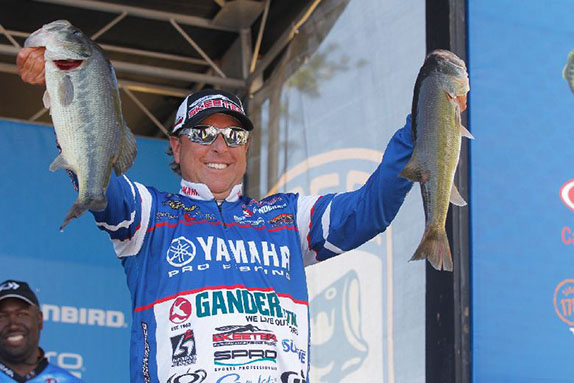 
Dean Rojas benefitted from a pair of 5-pounders late in the day on Sunday.

Considering the position he was in toward the end of day 1, Rojas is thrilled to be leaving California with a Top-3 finish and the lead in the AOY points.

“I keep going over it in my head, but day 1 was very challenging,” he said. “I only had 7 pounds in the boat with 20 minutes to go before I made that long run back. I pulled into an area and it was, ‘Wham, bam.’ That set the tone for the rest of the event. I just stayed in there the next 3 days.”

All told, he figures he caught 74 of his 78 pounds out of the canal he went to out of desperation Thursday afternoon.

Today, his first five weighed between 10 and 12 pounds, but he was aided by two late-day 5-pounders that served as twin kickers and gave him the day’s heaviest stringer. He caught most of his fish throwing a SPRO Bronzeye frog and flipping a Big Bite Baits Fighting Frog.

“I think it (big ones biting) had something to do with the tide,” he said. “There were times when they started to feed really good and the incoming tide was good, but I was losing it every day. Each day it got worse and I only had 30 minutes of prime conditions.”

Despite losing the fish he thinks would’ve probably won him the tournament, Monroe heads to Arizona happy with his effort and finish, his best since taking 4th at the Sabine River in 2013.

“I’m in the Top 15 in FLW points and in the Top 10 for the Elites,” he said. “I’ve cashed a check in every major event I’ve fished and I’ve mixed in several Top 20s, which is something you always want to do. I’m feeling good about the next couple events.”

Late in the day today, he had about 8 1/2 pounds and was set to go fish for 2-pounders to get over the 10-pound mark, but he talked himself out of it.

“I thought, ‘I’m here to win,’” he said. “I went back through my big fish area and caught a 3 1/2 and another 3 and then I saw the big one. I flipped up to her and she ate it and just came off. It was around 7 or 8 pounds. I saw her good. She came up and shook her head and just came off.

“The two fish I lost the first day cost me the tournament,” he said. “Throw this on top and it hurts. I put myself in position to win and I can’t ask for anything more than that. If I’d executed flawlessly, I would’ve won. Instead, I did pretty good and got 4th.” 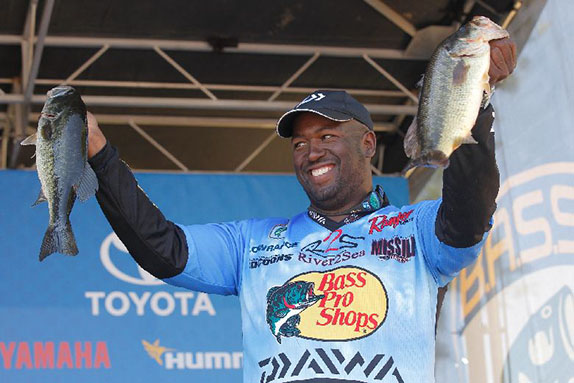 
Ish Monroe feels as though he had the fish on his line to win the tournament this week.

After starting the tournament with a 30-plus pound stringer, Zaldain tried to put himself in areas where he’d have additional opportunities at other magnum-sized largemouth the rest of the way. He accomplished that, but wasn’t able to capitalize on all of his opportunities.

Still, he leaves northern California with his fourth Top-10 finish in the last year and in the Top 10 in AOY points.

“Start to finish, I can’t complain,” he said. “We’re only about halfway there with this marathon (season). I wouldn’t have changed anything this week. I stuck to my plan and sampled the stuff down south that I wanted to sample. When I got down there I knew right away with the high outgoing tide, it was perfect.”

He said he “pulled the chute” on his flipping high tide program after two hours today went back into the area that produced his 12-pounder on day 1.

“I caught several males there and lost a 5-pounder and another around 7 or 8,” he added. “They were like 20 minutes apart as the tide was starting to come in and I think the fish felt like they had to be on their bed to protect it. I could see them.

“When they go to biting, it’s a 20-minute window, whether they’re on their beds or they just want to eat. You have to capitalize when it happens and I missed two opportunities. The hooksets were great. That’s how things go sometimes.”