Henry, Arey Were Both Dedicated Lookers 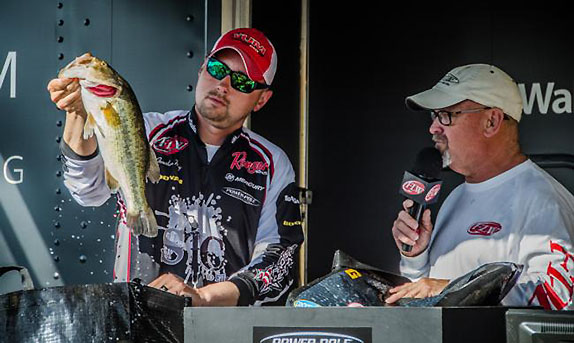 Finishing 2nd in a strong field at Grand Lake was a confidence-booster for Jonathan Henry.

Jonathan Henry and Matt Arey, the respective 2nd- and 3rd-place finishers at the recent Grand Lake Central Rayovac in Oklahoma, both committed themselves to sight-fishing before the event got under way. Conditions for that program weren't always perfect, but they nonetheless made it work.

Between them, they looked at 28 of their 30 weigh-in fish before catching them. Following are some of the specifics on how they went about their work.

Henry, an Alabama resident, came to Grand lacking a big reputation as a sight-fisherman, but that'll change in the wake of his runner-up showing. He's best known as a Lake Guntersville ace (he guides on that impoundment), but he grew up in east Tennessee, looking at bedding fish in highly pressured bodies of water.

"This was a good confidence builder," he said. "There were a lot of hammers in the field, and to finish 2nd amongst those guys is something I'm pretty happy with."

He looked at 13 of the 15 fish he brought to the scale. The two exceptions came on rainy day 3, when he caught two solid keepers on a spinnerbait in the morning that he'd liked to have eventually culled, but then he couldn't get a solid fix on several of his biggest spawners due to their depth and the difficult viewing conditions.

He's been battling a lung infection for several weeks, which has caused him to cancel some guide trips and reschedule others. It also limited his practice time for the tournament, but he was on the water long enough to get waypoints on approximately 150 spawners that weighed 3 pounds or more, including 15 to 20 that topped 4 pounds.

"I got there on Monday (3 days before the event began) and I heard that a big tournament the day before had been dominated by sight-fishing," he said. "I practiced for 6 or 8 hours that day and marked about 40. Then I went out in the rain on Tuesday and I had a co-angler with me, and we fished (conventionally) for 3 hours and only caught two fish.

"At that point I re-evaluated and I could see that from a points perspective and also having a chance to win, but best bet was to sight-fish. I put all my rods up and went all-in on sight-fishing.

He visited what he determined were his "easiest big fish" on day 1 and caught all five that he looked at within 90 minutes. He went 7-for-7 on day 2 and was within 2 ounces of leader (and eventual winner) Bradley Hallman when the weigh-in was complete.

He still had half a dozen big ones to try for on day 3 – the ones he'd determined were the hardest to get to or most difficult to see. He was able to catch three of those despite the dark skies, but two others eluded him. He enticed and lost a 6-pound bed-fish that day and also had one that was in excess of 5 spit up his spinnerbait right at the boat.

> "I used a jig and a couple of bright-colored baits to make the fish mad, but when it came time to catch them I went to a small, natural-colored bait," he said.

Main factor in his success – "In practice I went down a lot of straight banks looking for places where I felt like fish would spawn, but there wouldn't be a lot of fish and other people wouldn't look there. Some pockets had 30 (bedding) fish in them, but now big ones, and when the tournament started the boats were in there rub-rail to rub-rail."

Performance edge – "That 25-pound line. You usually have to go to something smaller to catch them off beds, but the first fish I went to was a double with a 4-pound buck and a 5 1/2-pound female right next to a big tree. I told my co-angler that I had to catch them on that line, even if it took me a long time, but they bit right away and for the rest of the tournament I stuck with the big rod. It made it real easy to get them in the boat." 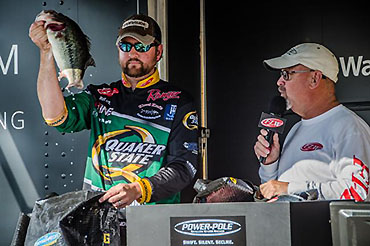 Arey, an FLW Tour pro from North Carolina, pulled all 15 of his fish off of beds at Grand.

"I looked all the way through practice and then sight-fished the whole tournament," he said. "I fished (conventionally) for a couple hours on the first day of practice, but then you'd pull into a pocket and there'd be 30 on beds and you'd say, 'This is stupid.

"It was just the sheer number of bass and the number of beds I saw in the first two pockets I went into. I'd been there before and I knew there were a lot of 3- and 4-pounders in that lake, but I'd never seen anything like that."

He concluded practice with approximately 115 marked fish, all weighing at least 3 1/2 pounds.

"I looked a little bit deeper (4 to 5 feet) trying to find fish that not as many people would find. I caught a lot of mine on the sided of pockets, whereas most people were going straight to the back. I also caught a few on the main lake, just on little turns and stuff."

He got most to bite within 10 to 15 minutes, but a few required a half-hour or so.

"One of them on the last day took two visits – because of the (low) light, I couldn't get it lined up right. I worked on it for about 20 minutes and then left, then I came back later and it took another 20 to 25 minutes to catch it.

"I wouldn't say I'm a great sight-fisherman, but it's something I'm comfortable doing. I did a lot of it growing up and I've always been intrigued by it, and it's a way that I love to fish."

Main factor in his success – "Just dedicating myself entirely to sight-fishing and not steering away from it and having enough fish to manage for multiple days."

Performance edge – "P-Line, to me, is the strongest fluorocarbon made, and that was important because a lot of the beds I found were in rocks and stuff."