BACK
Blaukat Story Was Catalyst

Bridgford All In With New Strategy 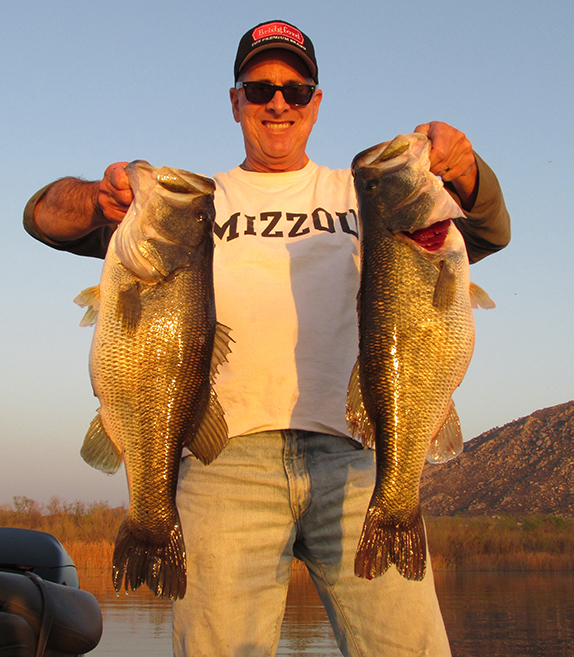 Al Bridgford found bass fishing to be a great challenge and escape from the stress of the business world.

(Editor's note: In observance of the Thanksgiving holiday, a new First Cast story will not appear until Monday.)

“There are no problems, only opportunities.”
– Hugh H. Bridgford

Al Bridgford still remembers the sound of the tree branches brushing up against the doors and windows and roof of his father’s car as Al Sr. drove down some old logging roads in northern California during the 1970s to reach remote stretches of the area’s noted mountain trout streams.

It was on those father-son outings, amidst the serenity of the pristine surroundings and far away from the bustle of life at home in Fullerton north of Los Angeles, that the fishing bug bit Bridgford – bit him bad.

He wasn’t long for trout, though.

“I remember reading a magazine (article) on an airplane about I think it was the first (Bassmaster) Classic,” Bridgford recalled. “I was over Arkansas or somewhere and was looking down at the lakes and I just thought how cool it was that (Ray Scott) was going to assemble these guys at some mystery lake. That’s when I got into bass fishing.”

Now, he can’t get enough.

“Once you get the bass bug, there’s just no other species,” he says boldly before rattling off Clear Lake, Sturgeon Bay (Lake Michigan) and Lake Chickamauga as his current holy trinity of bass destinations.

For many years, Bridgford has used bass fishing as an escape and therapeutic outlet to relieve the stress that tends to boil over in the business world. Born into the family food business his grandfather Hugh founded during the Great Depression in San Diego, Bridgford served as president of Bridgford Foods for two decades (1982-2002) and now tries to work mostly in the background as a Chicago-based consultant for the publicly-traded company that manufactures meat products and frozen bread dough. It employs more than 500 people across four U.S. locations and its products are sold in all 50 states and abroad.

“We work at business 24/7 and I don’t know if I’d be talking to you right now if I had not found bass fishing and the passion because it was my escape,” he said. “It’s funny how you forget your problems – personal and business – when you’re catching fish. Everything in your entire concentration goes into your bass fishing. It was therapy for me. Despite whatever was happening in the business, I always had hope that next week I’ll be out on a lake. It was something to look forward to.”

In his current role, Bridgford, Jr., 56, is trying to meld his knowledge of and passion for bass fishing with his eye for an untapped marketplace in spearheading a new marketing strategy built around sponsoring pro bass anglers and fishing tournaments. It’s an ambitious endeavor considering the relative shortage of non-endemic companies willing to dive headlong into the sport of bass fishing.

So far, so good, says Bridgford, who believes the exposure Bridgford Foods is getting in the fishing industry is part of the reason behind the company’s strong sales growth over the past 3 years. The company got involved with FLW Tour angler Randy Blaukat in 2013, then became a more visible FLW sponsor in 2014 and recently signed FLW Tour angler Matt Stefan along with past Classic and Forrest Wood Cup champion Luke Clausen to title sponsorship deals that will begin next year. Bridgford also sponsors Joe Uribe, who fishes mostly the Western Division of the Rayovac Series and other western trails.

“Contrary to some of the other companies, we’re going to run with it,” Bridgford said. “It’s a long-term program.”

Student of the Sport

Bridgford’s affinity for bass fishing can’t be passed off as merely a weekend hobby. He credits his dad and grandfather for instilling a love for the outdoors in him. He doesn’t take the opportunities he’s had for granted, which is why he does his homework before heading to the lake whether around home in Illinois or on a pilgrimage to one of the nation’s top fisheries.

He claims to have never missed a Bassmasters or FLW TV show – “I have the VHS tapes to back it up,” he chuckled – and buys up every tip or technique VHS or DVD he can find in an effort to learn any little new tidbit that he can apply to his fishing. One of his prized possessions is a series of seasonal tip videos Larry Nixon did several years ago in conjunction with Bass Pro Shops in which he outlined the best tactics for spring, summer and fall fishing.

“I finally got to meet him in person a year ago,” Bridgford said of Nixon. “I told him when I saw him, ‘You don’t know it, but you taught me how to fish.’ Every year before I’d go fishing, I’d pop in Larry’s spring tape. Every tip or technique video, I bought ‘em all and watched them 10 times over.”

He also combs the pages of fishing websites and magazines looking for information he can sponge up. He’s a bass fishing junkie by every standard.

“I’m the guy who cuts out every single article,” he added. “I have files going back I don’t know how far. I have every single one on every technique. There’s nothing like seeing a guy win a tournament on a different technique or a jig to really get you to go out and buy it and learn how to fish it. I’ve been entirely consumed by it.”

For years, he’s also kept tedious handwritten notes – on white, lined notepads – about every one of his fishing outings, however long or short, logging everything from the water clarity and temperature to cloud cover and location of specific pieces of cover like laydowns, etc. He recalled throwing a spinnerbait over submerged grass during his first trip to Lake Fork in 1992, the day after Barry St. Clair caught the 18.18-pounder there that still stands as the Texas state record. 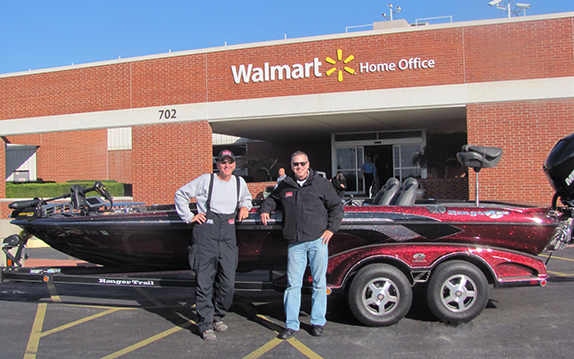 
Randy Blaukat, left, and Bridgford pose with one of Bridgford's Ranger boats in front of the Walmart offices in Benton, Ark.

“To me, it’s an education,” he says. “It’s a challenge to become a better fisherman. By keeping these notes, when I go to lakes that I’ve previously fished, I go back and read what the conditions were and what time of year it was and I use that information. I’m still one of these guys who writes stuff down.

“It’s amazing what you’ll forget like what lures and where exactly the fish were caught. I can tell you what laydown it was, what the water temperature was and what the clarity was and how I did that day. It’s important information even when I’m fun fishing, but to me it’s serious. I like to do anything with both feet in and I like to do it well.”

While Bridgford has never fished in a bass tournament himself – he’s competitive, but prefers to fish alone – he is banking on the exposure the family brand receives through its involvement with FLW and other events to drive future sales and marketing efforts.

Had it not been for an article BassFan published about Blaukat in November 2012 detailing the trials of his personal and professional life (click here to read it), it’s likely Bridgford Foods wouldn’t have gotten involved in the sport. The article struck a chord with Bridgford, an avid reader of bass fishing websites, even before browsing stock market information every morning. He had his wife contact Blaukat and within a few months, Blaukat signed a deal with Bridgford Foods to run a wrapped boat and truck for the company on Tour starting in 2013.

“It all gets back to BassFan and the article on Randy, who I had felt like I knew,” Bridgford said. “He always seemed like a quality individual. I knew how he felt about certain issues and we’re on the same page. He’s just a soft-spoken, humble guy and a great fisherman.

"I didn’t know about his situation. I had my wife reach out to Randy and that’s when it hit me that, ‘Wow, this fit is perfect.’ With the items that we make, that’s our customer and if we wanted to have a marketing focus, that would be a great strategy.”

That year, Bridgford put up half of his own corporate dividend proceeds in order to finance the agreement with Blaukat. Bridgford’s cousin, Baron, who serves as president of the company’s Illinois operation, took it a step further.

“’Why don’t we go all in?’” Al recalls Baron asking. “We talked to our corporate office in Anaheim and it’s been off to the races ever since. We’ve been adding employees and a lot of that revolves around that article. It would not have happened if I hadn’t seen it.”

The association with Blaukat, whose wrap features Bridgford’s beef jerky products, and bass fishing led to double-digit gains in sales for the company’s dry sausage and meat snack division in 2013, according to the company’s annual report to shareholders for that year. The fact that Walmart is the presenting sponsor of FLW was also a big draw for Bridgford.

“It’s been a really beneficial program that, despite what else is going on in the industry, we plan on moving forward with and growing,” he said. “It’s done wonders, not only at Walmart, but with all of our other accounts. There are a lot of fishermen out there who are the buyers of beef jerky. That is our marketing strategy. It revolves around that industry. It’s the No. 1 participant sport.”

Bridgford has no reason to believe this marketing push into the fishing industry will slow down, especially with the addition of a big name like Clausen to the team.

“These guys are all very marketing and business savvy,” he said. “They get the whole sponsorship company relationship. They understand it. They have gone to the wall for Bridgford. There are guys out there who just put a logo on and would rather fish. I have no problem with that, but these guys, while not employees, are great representatives of Bridgford.

“I really think I have the core of a great team, which is the most important thing to us,” he added. “Having the wraps and visibility when you’re going down the highway is something unique. The exposure is incredible. We’re growing our business and this is our marketing strategy. There’s no question about it. It’s unique. It’s our customer and it’s something we have passion for and it’s working. The numbers indicate it’s working.”