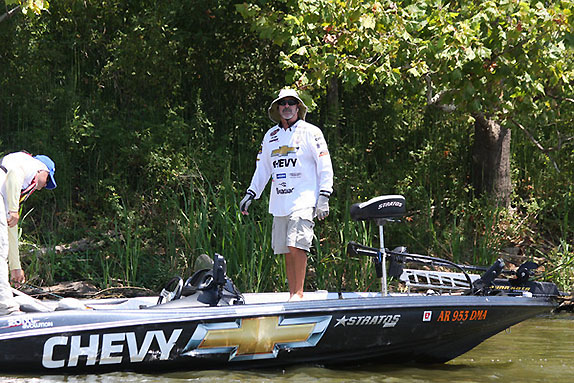 Chevy's decision to disband its FLW team might force Larry Nixon to pay his own entry fees next year for the first time since 1977.

The iconic Chevy team that was a fixture on the FLW Tour for many years and contained some of the biggest names in the history of the sport will not exist in 2015.

Team members learned in a conference call with FLW officials on Wednesday that the automaker will not return as a sponsor of the organization. The anglers are now tasked with acquiring their own sponsorship deals for 2015 at a time when many companies' marketing budgets for next year have already been exhausted.

The likelihood of Chevy's departure had been bandied about since last week, when it became clear that multi-year team sponsors Kellogg’s, Castrol, Straight Talk Wireless and Mars Chocolate would not renew their contracts with the organization.

The move by Chevy means that 17 anglers are now bereft of the team deals they fished under this year. FLW Marketing Division president Trisha Blake told BassFan last week that some could possibly find their way onto other FLW teams, but there are no guarantees in that regard.

Clausen rescinded his Chevy deal this week in favor of an individual sponsorship with Bridgford Foods, joining Tour veteran Randy Blaukat and Matt Stefan under that banner. The remainder of the anglers who sported the metallic gold cross on the center of their jerseys are all free agents.

Houston and Nixon had deals with Chevy dating back to the 1980s when they were capturing titles on the Bassmaster circuit. Yelas, also a longtime B.A.S.S. competitor, had been with the company for about a dozen years.

With no primary sponsorship lined up, Nixon said he could be faced with paying his own entry fees for the first time since 1977.

"That's going to be a hard bullet to bite, but I'm definitely not retiring at this moment," said the 64-year-old Arkansan, who took time out from a deer-hunting trip to participate in the conference call. "I'll be scrambling to find something else and I think there's a chance (a new deal) could come up that might be bigger and better than ever. If not, I'll just do the best I can on my own.

"People are only going to see a happy face on me. I've had a great career and I'm not mad at anybody and I'm not ready to quit, but I could. I'll put it this way – I've taken real good care of my finances over the years, or maybe I should say my wife has."

The 70-year-old Houston, who won B.A.S.S. AOY titles in 1976 and '86 but has focused more time and energy on his TV show and other business enterprises over the past two decades, said Chevy's move could signal the end of his long competitive career. 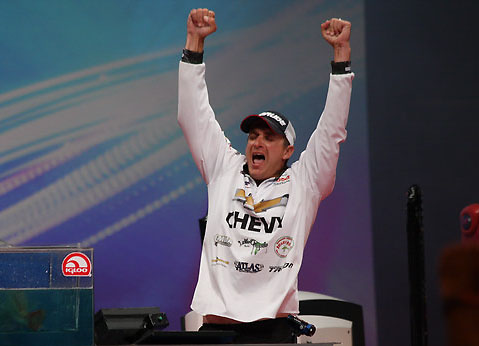 "I'm going to wait a little bit and see exactly what happens because from what I understand, Chevy might be reaching out to some of us (with offers of individual sponsorship deals)," he said. "I don't know if I'd be one of them they'd reach out to – I could make an argument for myself based on notoriety and all that, but I could also make a good argument for every other guy on the team. I think they could put all the names in a hat and pull out two of them and they couldn't go wrong.

"If I didn't fish tournaments anymore that wouldn't be the worst thing, and I'm not going to fish them unless I've got a good situation to fish them in. I'm going to keep a positive attitude and see what happens. I've been fired before and sometimes I've ended up with a much better deal with somebody else than the one I had in the first place, but my preference would be to stay with Chevy."

Yelas, yet another optimistic veteran, said he held out hope that the Chevy team would remain intact right up until the time of the conference call.

"I knew (the disbanding of the deal) was certainly within the realm of possibility going in, but I really expected they'd just reduce it a bit," Yelas said. "It's unfortunate, but I just want to make sure I thank Chevy for all the great things they've done for the sport of bass fishing over the last 30 years – they've done more than any other vehicle manufacturer has ever done.

"It's a shame to see them go because they've been a big contributor to a lot of anglers' livelihoods. It's a downer, for sure."

Thrift, the 2010 Tour AOY who's one of the most consistent performers in the game, was featured this year in a Chevy TV commercial that aired nationally (including spots on prime time college football broadcasts). He said he was also taken aback somewhat by Wednesday's proceedings.

"I kind of had a feeling about what was going to happen, but no matter how it goes, you're never really prepared to hear that," he said. "You can't really argue because it's all just business and I'm glad that I had the opportunity to represent a great brand like Chevy.

"I'm just looking forward to next year and I'm ready to go fishing. I'll definitely try to find some more sponsorship between now and the first of the year, but I've made my own way before with just a rod in my hand and without having to worry about speaking, and I can do that again."

For Gagliardi, it was some consolation that the news came just a few months after he deposited a check for half a million dollars (the winner's share from the Cup).

"When you win the Cup, you don't expect to be looking for a new sponsor so soon afterward, but there are certainly worse circumstances under which it could happen," he said. "I'm not going to say it doesn't hurt just as bad, but my case is a little bit different than some people's.

"I didn't have any contingency plan in place, but now I'll start thinking in that direction. I'll have to see if I can get something together this late in the game."

> Chevy's departure will reportedly impact members of all other FLW teams as well, as those deals included the use of a tow vehicle from the organization's formerly massive fleet.