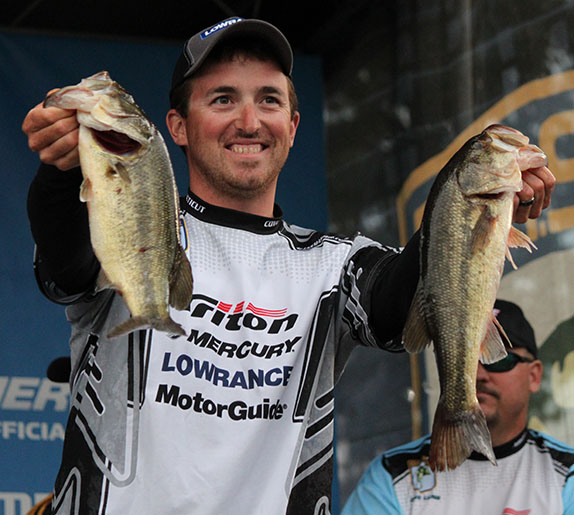 Paul Mueller had a sense things were tilting in his favor on the final day of the B.A.S.S. Nation Championship when while reeling in a nearly 3-pound largemouth, he noticed the fish had just one hook from his crankbait’s rear treble in its mouth.

As he gingerly brought the fish closer to the boat, it turned its head, allowing both hooks to sink into it.

It some ways, 2014 has been Mueller’s year. After grabbing everyone’s attention with a record-setting runner-up finish at the Bassmaster Classic at Lake Guntersville back in February, he earned a return trip to the sport’s signature event by winning the B.A.S.S. Nation Championship at the Ouachita River in Monroe, La., last week.

That barely-hooked bass was part of his tournament-best 14-09 stringer as he put together an incredible final day that saw him erase a deficit of 4-14 to win by 7-06 with a 3-day total of 32-15.

“There’s a certain excitement you get when you know you’ve qualified for the Classic,” he said Sunday night while making the 20-plus hour drive back to his home in Southbury, Conn. “For one, I didn’t think I had a shot. I was like five pounds behind and that’s a big deficit there. It’s like 12 pounds in a normal event. Coby (Carden) was catching them and he’s a heckuva angler. I figured on a bad day, he’d have 9 pounds.”

When Carden, who led after the first two days, brought just two fish to the scale on the final day, Mueller’s sense that he’d had a special day was confirmed.

“It’s obviously sweet (qualifying again for the Classic),” he said. “I didn’t expect it. I felt very blessed and exceeded what I thought I could do. I thought 11 pounds with a kicker would be my max and that’s what I was going for that day. I was fortunate in that I caught three really big ones.”

Mueller says he likes to eliminate water just as much as he likes to locate areas holding fishing during pre-tournament preparations. With so much water in play at the Ouachita River, he felt it was important to narrow his options. Navigation was tricky so running and gunning wasn’t plausible.

During four days on the water prior to the off-limits period, he spent time in the known community hole at D’Arbonne Bayou.

“I knew it’s one of the top places to be there,” he said. “I also went way down south to the Columbia lock where Koby Kreiger won the (Rayovac) Championship (in 2012). I wrote that off.”

He then found his way into Horseshoe Lake, where he ultimately spent his tournament days. The best limit he caught in there during pre-practice weighed about eight pounds, but he started to get dialed in on a flipping and cranking bite around cypress trees and their complex root systems.

“I was flipping a Reins Craw Tube on a ˝-ounce weight,” he said. “I always like a tube in dirty water. It just works good around wood, especially cypress. It doesn’t snag like a jig and it has a unique action. I knew it would be a key bait for me. I also caught some on a spinnerbait, but I think the water was still too warm for that to be really good.”

Like many backwaters along the Ouachita, access was a challenge, but he managed to wiggle his way through.

“It was tough to get into,” he said. “I had to make a special trail on my GPS because there was this little canal that led into the oxbow lake. It’s a pretty big area. I went in there one morning and spent all day in there and fished every inch of the lake.

“I caught a lot of fish in there, but they were all 1 Ľ to 1 ˝ pounds,” he added. “I wasn’t comfortable with the caliber of fish there, but I figured I had it in my arsenal if I needed somewhere to go.”

The official practice period consisted of two 8-hour days as B.A.S.S. wanted the competitors to get acclimated to the blast-off and check-in procedures.

Mueller steered clear of Horseshoe Lake both days and instead fished some stretches of the main river and parts of D’Arbonne Bayou he didn’t look at during pre-practice.

“I figured Horseshoe wasn’t going to change all that much and I wanted to see if there was anything good in the river,” he said. “I never got on a good main river bite. The water was dirtier than I like and the water had dropped a few feet from pre-practice. Basically, the only thing I had going in official practice was a buzz bait deal in D’Arbonne.”

He made his biggest decision of the tournament even before it started as he felt the weather system that came through the day before competition was going to diminish the topwater bite.

“You had to commit in this tournament,” he said. “When that front came through, I decided not to go into D’Arbonne.”

Figuring he had a solid 1-2 game plan of throwing a balsa square-bill crankbait early on then flipping the tube after the sun got higher in the sky, Mueller opted to go into Horseshoe Lake to start day 1.

“I felt really comfortable with the tube,” he said. “I could get a bigger bite with it and could also catch small keepers.”

He caught a small limit first thing on his crankbait, but later culled everything out on the tube and wound up with 9-08, a respectable total that had him in the Top 5.

“It was the day after a front so I downsized the weight to 3/8 ounce,” he said. “I figured out that I could not get the big fish flipping until the sun was high enough around 9 a.m. I focused on areas with shad and clumps of cover, whether it was three or four cypress trees together or a laydown intersecting with a cypress. The laydown had to have a lot of branches, though, so the fish could use it as a canopy.

“I knew that weather was going to get those fish tighter to cover and I knew the flipping bite would be the deal.”

On day 2, he couldn’t get bit on the crankbait and didn’t have a fish in the livewell until 9 a.m. By 10:45, he had his limit and decided to ease out of his key areas.

“I didn’t want to burn any more fish for day 3,” he said. “I felt like I had enough to still be near the top.”

He said a key adjustment was downsizing his flipping weight even more, to 1/4 ounce.

He ran into D’Arbonne Bayou later on and went through the stretch where he’d caught them in pre-practice, but the water had fallen and was dirtier.

“I eliminated it then,” he said. “I wouldn’t have been able to regroup and figure them out. That gave me really only one option on day 3 – go back to Horseshoe.”

He tried to get some early momentum going on the final day with a ChatterBait and spinnerbait, but had no takers.

“One thing I’d noticed was there was more bait toward the way back of the lake,” he said. “I worked my way toward the back and there was a defined line of trees then some isolated ones, and there was a depth change almost like a ledge that went from 3 to 6 feet. With the root system of the trees, sometimes they would be clumped in areas.”

He fished to where the deep water ended and cranked two of his bigger fish off the break. He wound up boating four keepers on the square-bill.

His last cull in Horseshoe was a 3 1/4-pounder around 11 a.m. and by then he figured he had 13 pounds. He noticed the water had dropped some more and he started to worry about getting back out through the access canal.

“I got conservative and figured I had the Eastern Division won and I wanted to get back near the ramp,” he said. “I had two hours to kill and there were some docks across the river from the ramp. The spent the rest of the day pitching and skipping those.”

He eventually caught a kicker in the 3 3/4-pound range on the tube off a piece of brush near the corner of a dock. 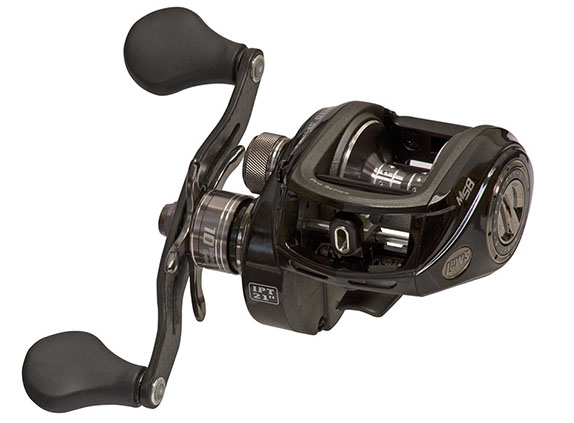 
The Lew's BB1 Pro was Mueller's reel of choice for flipping and cranking at the Ouachita River.

“That was a gift because I hadn’t caught a good one in the main river at all,” he said.

His 14-09 stringer on the final day was by far the heaviest of the tournament and provided a nice bookend to Mueller’s year as it sealed his come-from-behind victory.

“The toughest part about it was figuring out the fish at the time of day you were fishing,” he said. “It wasn’t easy but it wasn’t extremely hard either. They just weren’t grouped up much. I usually like these tournaments so I feel comfortable when I fish like that. It’s just a grind and all of your focus is on the next bite. I get into a different gear and I usually wish for tough tournaments because it eliminates some guys right away.”

> When throwing the square-bill, he said making multiple casts to the same spot was key to triggering strikes. “If I felt like I was in a high-percentage area, I’d cast over and over to the same stuff,” he said. “Most times, we’ll make a cast, maybe two, and then move on. I knew they were in there.”

> The Craw Tube is made with pinchers attached to both sides, but Mueller said he snipped them off to give the bait a more slender profile. He also opened the gap of the hook a little bit and he believes that increased his hook-up ratio.

> Main factor in his success – “Without a doubt, it was my faith in the Lord. Without that none of this would be possible. It came easy on the last day and while He blessed me the whole tournament, the last day was special.”

> Performance edge – “I don’t think I could’ve fished as methodically as I did without my Power-Poles. I have the 10-foot Blades and when you’re trying to fish every possible angle and make no noise with the trolling motor, those are crucial. They allowed me to really dissect areas and be efficient. If I had to use my trolling motor, I kept it on low, but the Power-Poles make no noise and helped me cover that area with a stealth presentation.”