Knowledge, Past Success Were Key Components 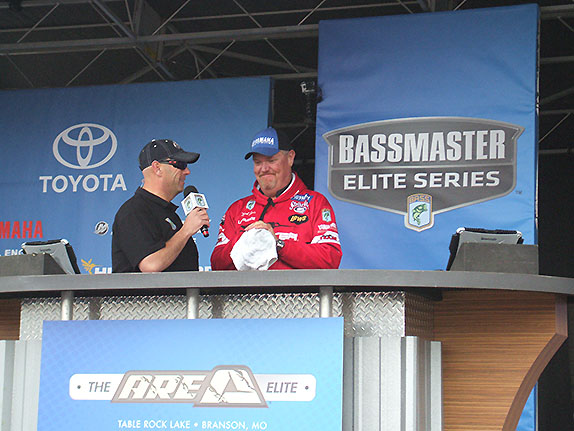 Mark Davis had never caught so many fish in one tournament as he did at Table Rock Lake.

There were really no state secrets about what the top-producing baits were going to be at the Table Rock Lake Bassmaster Elite Series. In the Ozark Mountain lakes, there are always a handful of staples that deliver – Wiggle Warts, anyone? – but on a lake chock full of fish finding the key presentation or technique that called the bigger specimens in was paramount.

The only eyebrow-raiser among the top finishers was Mark Davis, who threaded a twin-tail grub on a wobble-head jig and proceeded to catch upwards of 80 to 100 fish a day. Playing the numbers game nearly resulted in his first Elite Series win as he fell 13 ounces shy of winner Mike McClelland.

Conditions dictated in many instances what baits stayed on the deck and which ones got wet. With water temperatures ranging from the upper 40s earlier in the week to mid-50s later on, the jerkbait was a clear-water killer while the Wiggle Wart and other smaller-profile cranks were prolific in stained water.

Following is a rundown of how the balance of the Top 5 caught their fish at Table Rock.

When Davis won at the Table Rock Lake Bassmaster Tour event in the spring of 2004, he did it by making on-the-fly adjustments as the weather conditions changed.

Last week, he married himself to a 10-mile stretch of the White River and found a massive group of fish that kept him busy all four days of competition.

"I was just fishing around good spawning areas," he said. "It had deep water and the right kind of bottom composition with a lot of transitions from gravel to rock. It was the right combination of things."

He got dialed in on the wobble-head jig bite in practice and caught no fewer than 40 or 50 keepers a day in the event out of 6 to 10 feet of water.

"I don't know that I've ever fished an event and caught the sheer number of fish that I caught here," he said. "Some tournaments, you'll have a 40-fish day, but to do that every day and catch 100 on my best day, it was pretty unusual."

While others were bringing mixed bags to the scales, he weighed all largemouth with the exception of one spotted bass. He would swim and drag the jig and get bites either way.

"It was basically a jig bite and I thought I could compete there because I'd caught enough big fish in practice there," he said. "When I won here in 2004, I caught them on a combination of things. If you're throwing a jerkbait, a jig or a crankbait you can compete here. The grub is fat enough and has about the same diameter as a jig. We call it a grub, but they bite it the same way as a jig."

> Main factor in his success – "Just being in an area that had a lot of fish in it and keeping up with them each day. I'd find the sweet spot one day and it wouldn't be there the next. I had to hunt around and find them again. A lot of people probably wouldn't have kept going back and maybe I wouldn't have either, but there were so many fish there. I had to stay with them and keep them figured out." 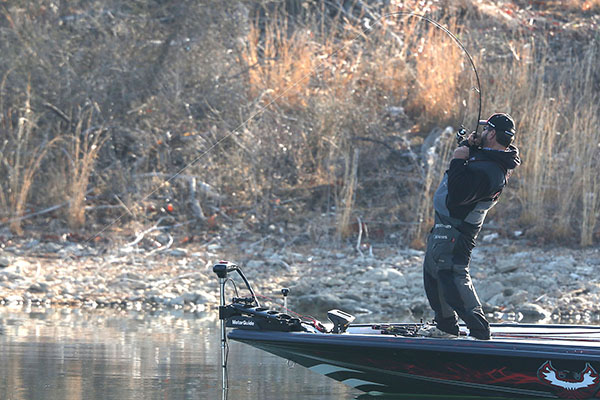 
Greg Hackney lost a day of practice to travel, but managed to come away with a second straight 3rd-place finish.

Like Davis, Hackney has won at Table Rock before and he has a lot of confidence in the Ozarks. He missed the first day of practice while traveling from the Sam Rayburn Reservoir FLW Tour where he also finished 3rd.

"I guess I had a productive practice," he said. "I didn't catch a lot of fish, but I tried to look at the whole lake. I'm real comfortable here and have been here several times. It suits how I like to fish. It's a big-time pattern lake. It's rarely ever won on a spot here. I ran the whole lake and looked at everything. The water was relatively clear with the exception of Long Creek and way up the James River."

He said he saw some fish cruising around up shallow and that keyed him in on where to target.

Conditions on day 1, 2 and 4 were perfect for his cranking pattern with a square-bill and a flat-side plug. He caught three cranking on Saturday, but had to finish his limit on a finesse worm after the wind died down.

The majority of fish he reeled in were smallmouth, but on average the largemouth were the bigger specimens. He weighed in mixed bags each day.

The largemouths and spots came on the flat-sided crank, which runs a couple feet deeper than the 1.5. The smallies that had moved up on some shallow gravel stretches were keyed in on the Strike King KVD 1.5 square-bill.

"It was a lot of fun fishing," he said. "These fish were ready to go. We probably hit it at a pretty good time. "These fish are like us, they're sick of winter and ready for it be done."

He fished the lower end of the lake on day 1 – he fished some with a Wiggle Wart, but migrated to the two Strike King baits – and got dialed in on his cranking pattern pretty quick. The next 3 days, he fished from the mouth of Long Creek all the way to Kimberling City, stopping at dozens of spots along the way.

"Most of the smallies were on gravel with bigger rock mixed in," he said. "I couldn't catch them on straight gravel. The spots and largemouth were on ledge rock, not necessarily a channel swing although some were on channel swings. The gravel pockets would have a 50- to 100-yard stretch of ledge rock and that's where the largemouths were."

> With the smaller baits, he was focused on making the longest cast possible, hence the 7'4" rod. "We weren't target fishing. I was airing it out," he said.

> He used 10-pound line on day 1, but eventually went with 12-pound for the flat-sided crank and 16-pound for the 1.5 square-bill. "For the smallmouth, I didn't need the bait to hit the bottom," he said. "Throwing the flat on the 12-pound, it didn't grind along the bottom and lot of them would get it when it would come up."

> He replaced the stock hooks on the flat-sided crank with Mustad size 4KVD Elite Series Triple Grip treble hooks and put size 2 trebles on the 1.5.

> Main factor in his success – "I came in with a lot of confidence. I'm feeling good and enjoying myself. The last time we were here this week I won and I have a lot of confidence in the Ozarks. Growing up in Arkansas, I spent a lot of time around there."

> Performance edge – "My Phoenix boat and Mercury were great and so was that MotorGuide trolling motor. I was running and gunning, hitting 50 or 60 spots a day. It's a lot of work that type of fishing, but it's a fun way to fish." 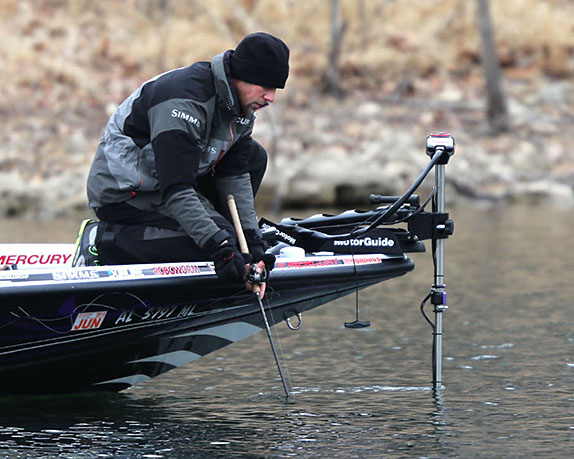 
Aaron Martens resorted to some old-school methods to get his baits down deeper at Table Rock.

Aaron Martens lugged an 8-pounder to the scales on day 1 and it helped give him the tournament lead out of the gate. From there, however, it was a challenge for the reigning AOY to catch other fish of significant size.

"All of the guys were pretty consistent (in the top 12)," Martens said after posting his sixth Top-10 finish since last May. "You had to get really fortunate or lucky to get that big bite here. It was such a crap shoot. You could pull into a pocket and catch a 5 and it would make a huge difference. I tried running and gunning all tournament."

For the most part, he tried to follow the warmer water and fish fresh areas every day.

"It was all about the pattern," he said. "I fished different stuff every day. I did go back to some, but 90 percent was new. I tried to stay in the little warmer water. The wind blew it around and it shifted every day. The fish didn't move a whole lot, but the warmer water made it easier to catch them. Just those few degrees made a difference."

He fished shallow gravel points, secondary points into the backs of coves and pockets.

"I'd go back and forth all long, in and out," he said. "I could catch them all day long on different stuff, too – bluffs, bluff ends, suspending in trees. I caught them on everything."

The majority of his fish were caught on original Wiggle Wart crankbaits and the rest came on a Megabass Vision OneTen jerkbait.

"I'd usually start for largemouth in the mornings because that seemed like the best time to catch them," he noted. "I'd rather fish for largemouth when they're biting better because you increase your chances of catching a big one.

"Some days, the largemouth bit better. Some days it was the smallmouth, some days it was spots. Certain fish would move up and eat better and the others would move back. The average size was pretty close, but there were big largemouth. A good smallie was 3 pounds, same with the spots."

He wishes more tournaments were held on deep, clear lakes like Table Rock.

"The reality is these lakes are more common in the U.S.," he said. "It's nice to be on lakes with real deep water and it's clear and rocky with defined contours. You can really pattern these types of lakes. It's a different skill set."

> He swapped out the stock hooks for new Gamakatsu trebles he has helped design. "They're amazing," he said. "People who know me know I'm very particular about hooks and these are phenomenal. There's nothing like them on the market."

> Main factor in his success – "It was a crankbait and jerkbait bite and that's actually my favorite way of fishing. I know a lot of people think I love to finesse fish because I'm good at it, but this week I could run and gun and fish a pattern and I like that way of fishing."

> Performance edge – "Everything worked good. I that Phoenix a little more every day. I did a lot of running and gunning and I still haven't been passed this year. I've been doing a lot of passing, though." 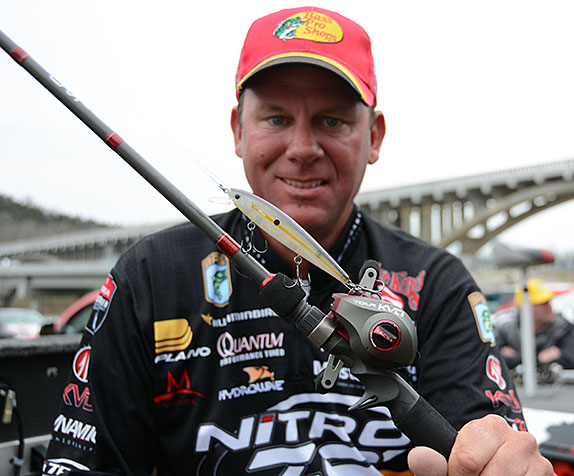 
The jerkbait in clear water was a strong producer for Kevin VanDam.

Kevin VanDam has fished Table Rock enough to know that it was going to be a challenge to produce consistent stringers throughout the event.

"It's so hard to be consistent here for 4 days straight," he said. "Just knowing the time of year and have had a lot of experience here, I knew the water temperatures were going to control what techniques I used and the speed at which I did them."

He fished stained water for a while on the first and third days of the event, but found the cleaner water to be more productive.

That's because he wanted to break out his jerkbait, which he did for a fair number of his weigh fish. He combed the stained water with a Strike King flat-sided crankbait.

"That was really consistent and caught a lot of fish, including some good ones in practice," he added.

> He swapped the hooks for his Mustad signature series triple grip trebles.

> Main factor in his success – "My past experience on this lake. I've been coming here for so many years."

> Performance edge – "Everything worked great. I kept the MotorGuide trolling motor running and hopped spots a lot. I kept on the move."