Mueller Married Himself To Eelgrass Up North 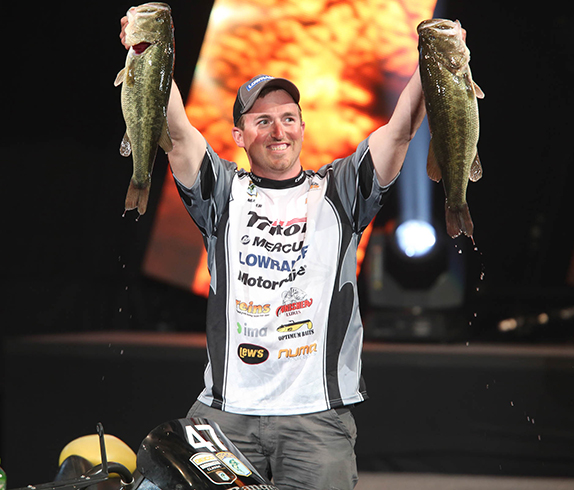 The Bassmaster Classic was not Paul Mueller's first turn in the spotlight at a fishing tournament. He has four seasons as a co-angler on the FLW Tour under his belt and qualified for three Forrest Wood Cups, winning the co-angler title in 2011 at Lake Ouachita.

He proved at an ever-changing Lake Guntersville last week he's no slouch on the front deck either.

Had he managed to catch even one more keeper on day 1, the bass fishing world would be celebrating him as the second B.A.S.S. Nation qualifier ever to win the Classic. He knows that, but isn't dwelling on the negative in the wake of an amazing experience.

"Just being able to fish the third day was a blessing," he said. "Any time you're in a tournament and you can make a huge climb and keep the momentum going from 47th to 5th and 5th to 2nd, I can't complain about that."

While it would've been easy to get swept up in all the pre-Classic hype and excitement and fall into the "just happy to be here" way of thinking, he kept his wits and drew on his past experience in big events. Above all of that, though, he said a higher power was at work.

"The biggest thing that helped me deal with all the extras during the week was my faith. I knew God was in control. Even after having that bad first day, I knew I could bounce back and that anything was possible. In all of those other tournaments, he guided me through those, too, so while I do have some experience with stuff like that, I knew it was all up to Him."

He found himself buried in a tie for 47th place after catching three fish for 9-10 on Friday. When the water he was fishing cleaned up and the wind started to blow on Saturday, the big fish came out to play. He made a bait change and proceeded to set the record for heaviest single-day five-fish Classic stringer with 32-03.

He surged into 5th place entering the final day and came within a whisker of knocking Randy Howell out of the hot seat with a 24-11 bag.

He was one of the few top finishers who committed to an area of the lake and relied heavily on just one or two baits. He also led a strong contingent of non-Elite Series anglers on the final day. College champion Jordan Lee was 6th, B.A.S.S. Nation angler Doug Thompson was 9th and Weekend Series champ Adam Wagner took 10th.

Mueller had fished Guntersville twice during his co-angler stint on the FLW Tour so the lake wasn't totally foreign to him, but he had little sense of where to go or how to break things down. He spent nearly 2 weeks at the lake in December before it went off limits and barely made a cast.

"I spent about 95 percent of that time scouting was sitting and looking at Structure Scan on my Lowrance, just looking to see where the best grass was," he said. "Toward the end, I was losing my marbles and had to catch a couple fish. I'd found some areas that had some fish and had some areas that had good fish, but the grass was gone by the time we came back."

When he returned for the 3-day pre-practice session, he quickly eliminated the lower portion of the lake.

"The southern end didn't work for me," he said. "I guess you can win down there sometimes, but I tried for about three-quarters of a day and another day in practice and I couldn't get anything going. I said, 'I ain't coming back here again.' I just went up north and fished the main river mid section up north."

The key to his places in the middle section of the lake was the presence of eelgrass. With the extremely cold winter Alabama has had, much of the grass that was in the lake as recent as December had been knocked back or died off.

"The area where I caught my fish in the Classic still had some good grass in it," Mueller said. "The area I had was chock full. I had eelgrass, which is not everywhere."

The areas he identified with the rich eelgrass were around BB Comer Bridge in the middle section of the lake.

"I had a stretch where it was loaded with eelgrass and they were there," he said. "They're still there. If the wind blew or if current was coming through the lake (Sunday), I could've caught another 30-pound bag. The thing that messed me up day 1 was it was dirty. There's a big sandbar on the outside of where I was and the wind was blowing the water in there and pushed it in there."

The story of day 1 of the Classic was as much about the front that moved across northern Alabama the night before competition began. It brought high winds and rain and left some parts of Guntersville a swirling, muddy mess.

Along with the rising water, sunny conditions replaced the overcast and cool weather the anglers had earlier in the week. The water temperatures rose significantly during the event, prompting some fish to head shallow.

Mueller got started throwing a lipless crankbait in eelgrass on day 1. The water he was fishing just south of BB Comer Bridge and around North Sauty Creek had muddied up and visibility was only about 6 inches. As is sometimes the case when fishing with lipless baits, lost fish can lead to frustration and heartache. Mueller said he lost a fish in the 5-pound class and another around 2 pounds.

Those would've given him a limit and, ultimately, the title.


Mueller worked this ChatterBait with a Reins Fat Rockvibe Shad trailer through eelgrass to catch nearly 57 pounds over the final 2 days of the Classic.

"I'd have had this tournament," he said.

On day 2, the water began to clear up and he switched to a Z-Man ChatterBait. The bait change led to a historic day, as he pulled 32-03 from the Guntersville eelgrass to rocket up the leaderboard to 5th.

"I didn't get a whole lot of bites, but when I did, they were big," he said. "I wasn't really culling a lot of fish. You either catch big fish or little fish here. You'll catch a 1 1/2-pounder or one over 4."

His monstrous stringer pulled him to within 5 1/2 pounds of day-2 leader Edwin Evers entering the final day.

On Sunday, the wind that aided Mueller's strategy on day 2 didn't return. While he still caught nearly 25 pounds, he thinks the lack of wind and current curtailed the bite in the areas he fished. He also had to make repeated casts to a spot in order to draw strikes on the ChatterBait.

"I had an area on day 3 where I think they started to get a little pressured because I'd caught some there on day 2," he said. "I had to make literally 40 casts to a specific spot. I'd keep saying I'd keep moving, but on the 40th cast, I'd catch a 4 1/2 or 5-pounder. It was just crazy."

He said the ratio of males to females he caught on the final day was about 2-to-1.

"It was to the point in the morning where it was one right after the other, but they were small ones," he added.

> Mueller said he was targeting irregularities with grass nearby.

"I was looking for inside turns and points in that area because it was all irregularities," he said. "If you had a clump of eelgrass next to an inside turn or a point, that's where the big ones were sitting. The males were all over the place, but the key was that grass. It was thick and healthy. I think, even though the water was warming up, they never moved. They didn't have to. There was so much grass there."

> He said the grass topped out at 3 feet and then dropped in 7 feet with a 10-foot channel behind him. "I was sitting on 7 or 8 feet and throwing into 3 to 7 range," he added. "It was an old creek channel off the main river. It didn't have milfoil. There were little points off that channel in 3 to 7 feet."

> He said slow-rolling the ChatterBait, then popping it free from the grass was the key to triggering reaction strikes.

"They'd sit on the upside of the point and I'd throw that ChatterBait and slow-roll it and they'd react to that. The difference when you're throwing the (lipless crankbait) in the grass is if you reel it slow, it would get buried in the grass. With the ChatterBait you can slow roll it. I was just creeping it through there.

"The ChatterBait could get through the eelgrass no matter how you retrieved it. If you went too slow, it would get buried and you'd have to pop it. I'd work it slow enough to where it would get hung up a little bit and then I'd give it a short pop and a lot of times on that short pop, boom, they'd hit it."

> He chose the Elite model of the ChatterBait because it's constructred with a stout 5/0 Gamakatsu hook. "If I hooked a big one, I didn't want any flex," he said.

> Main factor in his success – "When I put the Reins Fat Rockvibe Shad on a ChatterBait, it rolls side to side so it looks a lot like something you'd put on a scrounger head. You'd have the vibration of the ChatterBait, but the swimbait would be rolling side to side. I was slow-rolling it over the tops of the eelgrass."

> Performance edge – "I have two Lowrance HDS-12 touch screens. To me, they were huge. I have it set to be 90 percent map and 10 percent sonar. I didn't rely on the sonar part because you couldn't really see them. You didn't want to be on the grass because you'd be spooking them. I'd be watching where my boat was in relation to the next contour. The biggest key for that was the Navionics Platinum chip because you could see all the little irregularities. Once you caught them, you could look on the map and tell where you could catch another one."