Chris Lane went to the final Bassmaster Elite Series event of the season on a near-desperate quest to garner a 2014 Bassmaster Classic berth. He'll pull out of Michigan as a double-qualifier for the sport's premier showcase, which will be conducted in February out of his adopted hometown.

The Florida native, now residing in Guntersville, Ala., caught a 19-11 sack of Lake Huron smallmouths to prevail by nearly 5 1/2 pounds in the derby that was named for Lake St. Clair, but played out primarily on the neighboring Great Lakes (Erie and Huron). That gave him a 4-day total of 82-04, which became a lot more than he needed when Aaron Martens, crowned the circuit's Angler of the Year just a day earlier, suffered mechanical difficulties on his return trip from Erie and missed the weigh-in.

Martens said his stringer weighed approximately 20 1/2 pounds. If that was the exact number, he would've exceeded Lane's total by 6 ounces.

Mark Davis, the leader after the previous two weigh-ins, boxed just 13-03 on Erie today to finish a distant 2nd with 76-13. His bag was one fish shy of a limit and he said he lost two that would've helped him immensely.

Alton Jones, who shared fish with Lane the last 2 days at the juncture where Huron connects with the St. Clair River, weighed a day-best 22-03 to catapult from 12th to 3rd with a 76-06 total.

Here are the totals for the remainder of the Top 12:

It was an excruciating event for both man and machine as the vast majority of the high finishers disdained St. Clair due to its abnormally skinny fish and made wave-plagued, 100-mile-plus round trips to the bigger waters nearby. Erie was the preferred destination for most, but it was Huron, previously an unknown quantity on the national scene, that ended up hosting two of the Top 3.

Lane's victory gave him an automatic Classic berth, and he also gained enough ground to get inside the Classic cutoff on the final points list (as did Davis). Due to numerous double-qualifiers Fred Roumbanis (No. 39) currently occupies the last qualified position, with Jason Williamson the first out.

Among those who made it in were veteran Gary Klein (No. 35), who'll fish his 30th Classic, and true rookie Josh Bertrand of Arizona (No. 37). Prominent names on the outside include four-time Classic champ Rick Clunn and former winners Boyd Duckett, Davy Hite, Paul Elias and Mike Iaconelli, along with Greg Hackney, Mike McClelland, Jeff Kriet, Shaw Grigsby, Tim Horton, Kelly Jordon and Zell Rowland. 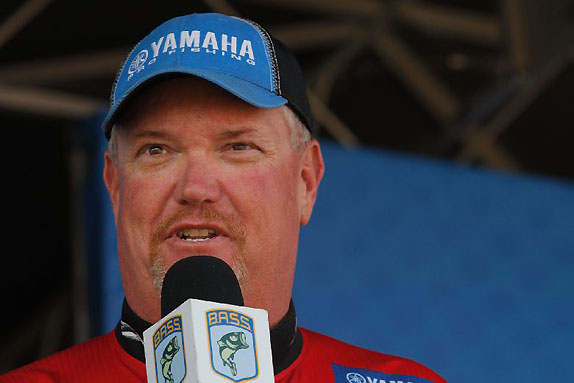 The cutoff could drop another notch or two depending on whether the winners of the remaining Bassmaster Opens (one in the Northern Division and two in the Central) become double-qualifiers. The newly instituted Bassmaster Wild Card, to be held at Florida's Lake Okeechobee in December, will represent the final opportunity for a non-qualified Elite angler to get into the Classic.

Lane was Worn Out

Lane's victory is his first in a regular-season Elite event and means that he and older brother Bobby now both have one (Bobby won at Kentucky Lake in 2009).

"Oh man, it feels good," he said. "But to tell you the truth, when I got back in, I wasn't even worried about the win. I was literally exhausted. People can talk all they want about Smith Mt. Lake or anywhere else that gets rough because of so many boats, but they're nothing compared to this.

"The relief I had (from qualifying for the Classic) really happened yesterday," he continued. "Today at noon, I decided I had to reset my goal to winning this tournament, and right after that I caught my biggest one (a 4 1/2-pound smallmouth). I'd gotten that fight back in me."

He didn't learn the details of Martens' plight until tournament director Trip Weldon spoke to him after the weigh-in.

"However it happened, I beat the best dropshot fisherman in the world," he said in reference to Martens. "The only reason I could do it, though, is because of what he's taught me about it. Dropshotting was something I never knew anything about.

"We've fished around each other a few times and he's shown me some stuff. Maybe he taught me too much."

He'd caught a 5 3/4-pounder on each of the 3 previous days, but his biggest today was a 4 1/2. He said he made numerous culls before reaching his final weight.

He fished a variety of structure types throughout the event and caught fish on a number of different baits (dropshot, spinnerbait, tube and jerkbait). Full details of his winning pattern, as well as those of the other top finishers, will be published in the coming days.

Davis was in 60th place in the points before the circuit ventured into smallmouth country for the final two derbies. He ended up in 32nd with his 17th Classic berth secured.

"My main objective was to make the Classic, and I made it," he said. "I'm extremely happy with that. This whole week was a big gamble – you saw what happened to Aaron today – and on those kind of runs anything can happen. 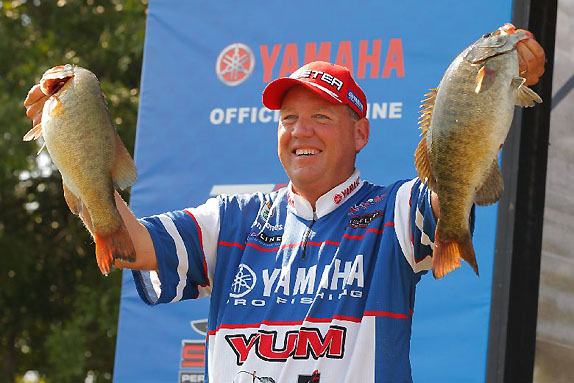 "Mechanically, everything was good, but I just didn't fish a clean tournament. I lost big fish on three different days and you just can't do that against these guys."

"My fish took off from where I'd been catching them and I had to scramble around. I was really relying on that one area and I never got a bite there today."

Jones was another guy who accomplished his primary objective for the week as he nailed down his place in the post-season (the Top 8 on the final points list automatically advance).

"It's always good to achieve a goal you've set, and to move up to 3rd place today made it all the sweeter," he said. "I'm very pleased and very thankful about the way things went this week.

"I'm also very excited for Chris Lane for making the Classic and winning this tournament. It's great when you can have a good finish and also help a friend."

For the final 2 days, he and Lane took turns drifting a 250-yard stretch of current Jones found in practice that was loaded with big bronzebacks. The four stringers they caught combined to weigh nearly 88 pounds.

He caught 16 keepers today, only one of which weighed less than 3 pounds.

4th: Another Rally for Omori

Omori gained 14 places in the points standings with his finish, which moved him from below the Classic cutoff (41st) to well above it.

"It feels great," he said. "That's 3 years in a row that I've started on the outside of the (cutoff) and made it. I really enjoy fishing for those smallmouths and I had a great week.

"Overall, I was on good fish at almost every tournament this year, but I made some wrong decisions and lost some key bites. This time I fished a good, clean tournament to get into the Classic and I can enjoy the next 5 months. 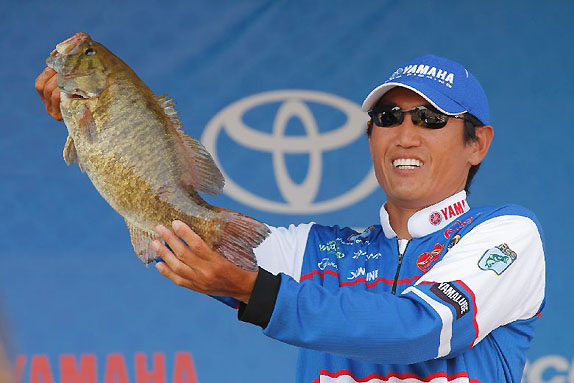 He fished the same area in Erie as Wellman and Kiriyama. It gave him 10 keepers today, including a 5-11 bruiser.

Wellman concluded on a high note after a disappointing second half of the campaign – he'd finished 62nd, 78th and 90th in the previous three events.

"You can never be disappointed with a Top-12 finish and it's great to end up in the Top 5," he said. "I really went out to try and win this tournament and I think I had the fish to do it.

"I didn't have time on my side, though, making those long runs (about 170 miles a day). Another hour or 2 each day would've really helped me, and I also lost a few good ones."

A 4 3/4-pounder was the biggest of the eight keepers he boated today.

"The place where I caught the 20 pounds yesterday I hadn't fish in 2 years or more, and when I went there today the current had changed," he said. "I went to a Plan B spot and caught 19 1/2, and I probably could've had 22 if I'd landed all my bites."

The mechanical issue that halted Martens' journey from Erie back to the ramp in Harrison Township, Mich. was a severed bolt on his jack plate (the mount that controls the vertical movement of the motor). He was only about halfway back – still about 37 miles out – and was headed for a fuel stop when it occurred

He said there were three massive boats in the relatively narrow channel he was using to access the gas station; two headed one direction and the third going in the other. When he attempted to knife between them, his boat was slammed by an enormous wave created by one of the larger crafts that he said was at least 7 feet in height.

"It was a solid hit and the boat spun a little bit," he said. "I heard the bolt snap, but the motor was still sitting on the studs. It just twisted the motor and sheared the bolt off."

He was already running a few minutes behind his appointed schedule and there were no other competitors in the vicinity to render assistance. Also, cell-phone service was spotty, probably because he was very near the border with Canada.

"I've been fishing a long time and I don't think I've ever had anything like that happen. I've definitely never had it happen when it cost me the tournament.

"If I'd just left 5 minutes earlier, I could've avoided the whole thing."

(Money totals include shares of Angler of the Year prize purse)