BACK
Long Road Back 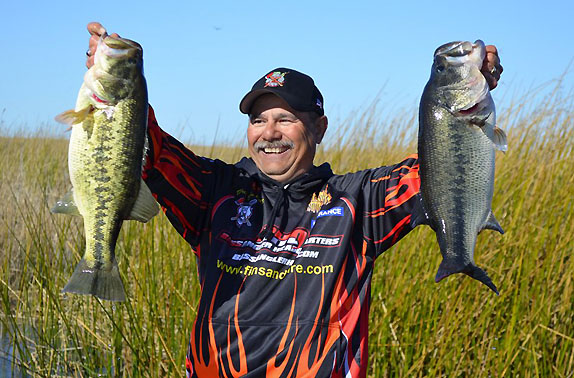 Greg Gutierrez will travel back and forth across the country three times this year as he attempts to return to the Bassmaster Elite Series.

Greg Gutierrez's quest to return to the Bassmaster Elite Series is playing out a long way from home.

The 51-year-old resident of Red Bluff, Calif. is back fishing B.A.S.S. events for the first time since 2008, when he dropped off the Elite Series at mid-season to remain near home with his ailing wife. The two-time Classic qualifier is competing in this year's Northern Opens, and a 67th-place finish in the opener at the James River last month means he'll need extremely strong showings at the final two stops to end up high enough on the final points list to return to the organization's top level.

He's undergone many changes since his last Elite event at Lake Murray in '08. Wife Bobbi has made a strong comeback from surgery to remove nearly half of one of her lungs, and in January he closed out a three-decade career fighting forest fires.

Son Gregory, who was just out of high school when his mother's medical condition reached a critical point, was married earlier this year and is in the process of buying his first home. He's following the old man's career path and is employed by CalFire (formerly the California Department of Forestry).

The elder Gutierrez never got completely away from high-level competitive fishing, but prior to the James River event, it'd been a long time since he'd casted for cash at a venue with which he wasn't intimately familiar. He wasn't entirely pleased with his performance, but he considered it a decent first step on the comeback trail.

"For the first few days of practice I wasn't comfortable at all," he said. "I didn't know the fishery at all or its capabilities, and I didn't see that kind of weight coming (Elite pro Randy Howell averaged nearly 16 pounds a day en route to victory).

"The last couple days (of practice) I put together a pattern in an area where I thought I could do well. I put myself in the right areas doing the right things and I had the bites to do a lot better.

"I had some opportunities, but I don't look at it like I blew it," he continued. "A little bit of luck can go a long way in a tournament, and I didn't feel like I had much that time."

Gutierrez's tournament participation over the past several years was limited to events in his home region. He finished 2nd in last year's Western EverStart points and tied for the Angler of the Year (AOY) title in the WON Bass Northern Division, losing out on a tiebreaker.

He acknowledges that while the competition level on the West Coast is stiff, there's something that's been missing.

"I look at it the way it is here in the West – there's several organizations that run a bunch of team tournaments and what they end up doing is splitting up the anglers," he said. "Don't get me wrong, the anglers are sticks, but there's a select few that all they're doing is trading money back and forth.

"I want to grow my brand and I want to move up and to do that, I had to break away from that (scene)."

He's managed to retain a few key sponsors from his Elite days (Reaction Innovations and Lowrance head that list). He recently signed on with iRod and he's working with a start-up company called Frenzy Baits, which he said is getting ready to release an ultra-weedless vibration-style lure.

His ultimate goal is to obtain a primary sponsorship with a company in the fire prevention or control sector.

"I've been making contact with some agents and trying to get on some kind of staff because I think I have a lot to bring to the table with my non-endemic background. My experience with fire could open up so many doors that it's not even funny."

Gutierrez flew out of Sacramento, Calif. to Albany, N.Y. last week to begin practice for this week's Northern Open at Lake Oneida. He finished 40th in an Elite Series derby there in '06, earning a $10,000 paycheck.

"The first time I was there it was a huge learning curve, but the second time I did pretty well," he said. "There's a lot of neat things about that lake – you can do power or finesse stuff and it has both greenheads (largemouths) and brown fish (smallmouths), and I like that."

He hopes he won't be plagued by the measure of indecisiveness he experienced at the James.

"To be honest, there were a couple of times there when I questioned myself. But after about the first 3 days of practice, I started moving faster and thinking quicker and trusting my judgment.

"Things started to click and I was able to get back on my feet again."

> Other outfits Gutierrez is helping to promote are Bass Angler Headquarters, Slay Custom Rifles and the Code 3 for a Cure Foundation. The latter is a non-profit that aids first responders who've been diagnosed with cancer, along with their families.