Lester Ready To Take A Crack At Elites 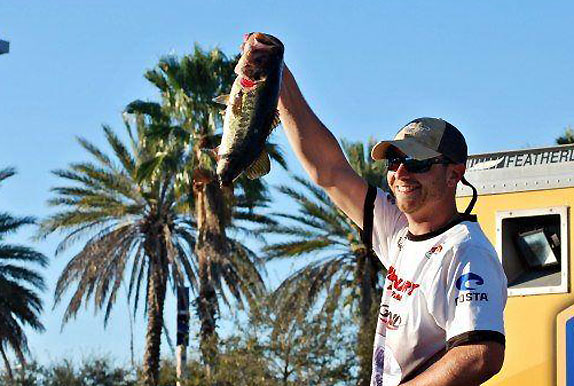 The Bassmaster Southern Opens were a done deal relatively early this year, as the third and final event on the circuit concluded in mid-May. That could be a real advantage for points champion Brandon Lester.

The Top 5 points-earners from each of the three Open divisions are guaranteed slots in the Elite Series the following year. Lester, who plans to accept that invitation, now has more than half a year to secure sponsorship help for his foray onto B.A.S.S.' top circuit.

That's a luxury that won't be afforded to the Northern and Central qualifiers, as those schedules don't conclude until September and October, respectively.

"I absolutely want to do it – it's been my dream for a long time," said the 25-year-old from Fayetteville, Tenn. "But unless you're very well off (financially), you obviously need some funding help to compete at that level.

"I don't have anything lined up right now, so I'm starting with pretty much a clean slate and I think that's kind of a good thing. I've got a little time to get everything together, but I'm going ahead and getting started now and I've got a few things going. Up to this point I haven't taken any (smaller deals) because I didn't want them to interfere with what might be a bigger one if I did make the Elites."

Played His Own Game

Lester, who runs the receiving dock for a company that produces injection-molded plastics for Japanese cars, captured the points crown in just his second year of competing at the triple-A level. He finished 24th in the standings the previous year.

He began the 2013 campaign with a 3rd-place finish at the Kissimmee Chain of Lakes, then logged a 15th at Douglas and a 16th at Logan Martin. He beat out a slew of tour-level pros for the Angler of the Year title, as the final Top 10 included the likes of Chris Lane, Greg Vinson, Glenn Browne, David Walker, Chad Morgethaler and Aaron Martens.

"I think one of the reasons I did so well this year was because the lakes really set up well for me," he said. "All of those fisheries are really diverse and I was able to find stuff that really suited my style. I could do what I felt comfortable doing.

"My first year wasn't bad, but I knew I could do better and that's what kept driving me on. When I got 3rd (at the Kissimmee Chain) this year, that gave me a lot of confidence and I kept that rolling throughout the year."

He prefers to stay near the banks, but says his outside game is improving and will continue to do so between now and next spring.

"My whole theory is that you have to be very versatile to compete at that level these days," he said. "You have to be able to do a bunch of different things. I prefer shallow water and I'd rather be beating the bank, fishing something I'm looking at, but I'm not saying I can't fish offshore and I've had some success fishing out.

"My offshore skills definitely need the most improvement, though, because so many tournaments these days are won out there – on the Tennessee River lakes or just about anywhere you go in the summertime, that stuff comes into play. It's still my biggest weakness."

Lester plans to compete in as many local events as possible throughout the remainder of the year on his home lake (Tim's Ford), as well as regional venues such as Guntersville, Chickamauga and Nickajack. He'll also be on the water frequently in non-competitive situations.

"I want to fish at least 3 days a week to keep my skills up and keep up with the seasonal movements of the fish," he said. "It's a little harder in the winter because the days are shorter and I don't get off work until 3 or 3:30 (p.m.), so a lot of times I can't go during the week.

"I'm definitely looking forward to next year. It took a little while to sink in, but now it's kind of surreal to sit back and think that there isn't any higher level than the one I'm going to. I'm excited, for sure."

> Lester studied business marketing at the University of Tennessee-Chattanooga and competed on the school's fishing team. He's about a year short of a bachelor's degree, but that background will nonetheless help him in his sponsorship quest.

> He and wife Emily celebrated their first wedding anniversary last weekend. He said there are no plans to have children anytime soon. "We want to wait a couple years and see how this Elite deal goes."