No Swimbait, No Problem For Reese 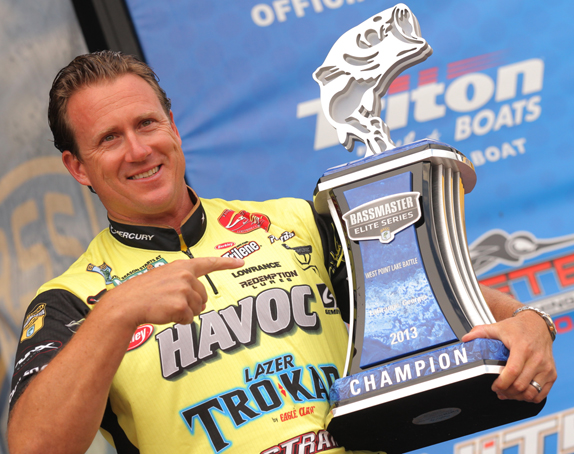 Skeet Reese stuck with an area he found in practice and adjusted to the frequent changes in conditions during the tournament.

(Editor's note: Skeet Reese did not respond to numerous interview requests following his victory at West Point Lake. The pattern information that appears below was gleaned from his on-stage interview and from the press release issued by B.A.S.S. following the final round. Additional details will be published once BassFan is able to reach Reese.)

Skeet Reese arrived at West Point Lake last week thinking how cool it would be to win the Elite Series event there fishing a style of bait he loves to throw.

"I came here fantasizing about winning this tournament with a swimbait," he said. "I'm a swimbait guy and I love throwing a swimbait, but I couldn't get bit on a swimbait all week. The lake fished totally different than I had anticipated."

Rising water, then dropping water, then a day-long deluge rainstorm mixed in with clouds, an east wind and a bevy of post-spawn fish in a state of flux certainly turned the fourth Elite Series event of the season into a grinder's delight for some and a head-scratcher for others. Little did Reese know, it was all playing into his hands. It wasn't until the final day, when the sun burst through on the Chattahoochee River impoundment, that Reese was able to trigger a flurry of big fish to bite (on light line and tackle) and come out on top.

He hung around the Top 10 the first 3 days, never getting higher than 5th or dropping lower than 7th. Then on the final day, he blasted 15-04 (just one of four 15-pound bags weighed all week) to erase a 2 1/2-pound deficit and bank his fourth Elite Series victory by 2 pounds over Aaron Martens.

"I didn't think I'd be throwing a spinning rod and 10-pound line," he said. "I thought I'd be throwing a swimbait if I'd won. It just goes to show that preconceived notions don't ever work. I just kept an open mind and went fishing."

As he mentioned above, Reese attempted to get something going on a swimbait in practice, but eventually moved in shallow to target post-spawners. He mentioned on stage after his victory that the creek by Highland Marina, a known release spot for local tournaments, seemed to harbor a good population of quality fish.

"It was the best thing I found in practice," he said. "I saw some big ones and had some bites. I wound up grinding it out there all week long."

Reese started the tournament in the creek where he'd located several fish near beds. Problem was so did a number of other competitors. He managed 13 pounds, which had him in 5th place after day 1.

Entering the final day, the gap from leader Tommy Biffle to Cliff Pace in 12th was just 4-01 so each finalist knew he had a legitimate opportunity at the win. Reese faced a 2 1/2-pound deficit, which he quickly erased.

"(Sunday), the sun came out and it repositioned the fish where they were on Tuesday and I just started going down the banks slow and got the bites," he said.

He managed between five and eight keepers a day during the event.

"Going out in the morning, I was never optimistic about catching a good stringer," he added. "t doesn't matter what lake you go to, most people get caught up fishing their spots, especially on a home lake. We pride ourselves fishing the moment and the conditions. I was able to do that and change up."

> He used a variety of baits on finesse presentations, including a wacky-rigged 5" Berkley PowerBait Fat Dover Crawler (methiolate) and a Berkley Havoc Bottom Hopper Jr. (smoke purple) rigged on a dropshot. 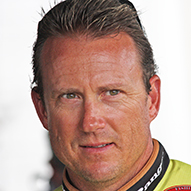