BACK
Two Tours A Possibility 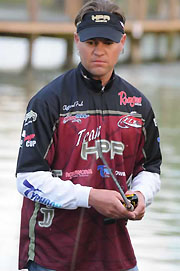 Cliff Pirch doesn't expect the level of competition on the Bassmaster Elite Series to be much different than it was on the FLW Tour.

Cliff Pirch hopes to fish both major professional circuits in 2013. But if finances limit him to one, it'll be the Bassmaster Elite Series.

The Arizona pro, a five-time Forrest Wood Cup qualifier and winner of the 2011 Chickamauga FLW Tour Major, will accept the invitation to fish the Elites that stemmed from his 2nd-place finish in this year's Northern Open points.

"I just think it opens up a few more sponsor opportunities," he said. "I still have a lot of good friends at FLW and I'll still fish there when I can, but this seems like the better direction for me right now.

"I'm not ruling out fishing the FLW Tour on top of the Elites, but I'll have to see how things go sponsorship-wise to figure out if I can pull it off. I fished 19 or 20 events this year and even though there were times I wished I'd had more practice, it worked out okay overall."

Consistency will be Key

Pirch was a boom-or-bust competitor for most of his 8 seasons on the FLW Tour. He averaged more than one Top-10 showing per year, but only twice finished higher than 27th in the Angler of the Year (AOY) race.

One of those occasions was this year, when he ended up 12th in the points. He logged just one Top 10 (a 9th at the Potomac River), but never fared worse than 64th. He also performed well in a couple of non-tour events, coming within a quarter-ounce of winning his third WON Bass U.S. Open at Nevada's Lake Mead in September.

He hopes to carry his newfound consistency with him to the Elite Series.

"The (Bassmaster) Classic is a big part of your season over there and you want to make sure you're a part of that event, but the biggest thing for me is I want to maximize my opportunities," he said. "That'll be my main goal, and I've done a lot better in that department over the last year and a half or 2 years.

"In the past I've been more of a home-run guy, but I'm going to be in a situation where I need to cash checks, so consistency will be a lot more important. I'll swing hard if I get the chance and do the things that win tournaments, but I won't always gamble on an all-in deal, even though that occasionally works out. A lot of times a Roboworm on a dropshot or a jighead worm can keep you in check range."

From a competition standpoint, he doesn't expect to see a big change between where he came from and where he's going.

"I know there's some really tough competitors on the B.A.S.S. side, and those guys are there for a reason. But at the same time, I don't think it's going to be a lot different than going up against Jay Yelas, Brent Ehrler and David Dudley – you're still competing against the world's best.

Less Time on the Road

One apparent benefit for Pirch in 2013 will be spending more time at home. Two Elite events are in Texas, which is a relatively short trip compared to what he's accustomed to, and he's looking at fishing the new Outdoor Heritage circuit, which will offer four events in Arizona or southern Nevada from January through May. He also might sign up for a Western EverStart or two.

Of course, if the two-tour possibility comes to fruition, that'll involve a lot more highway miles and perhaps an occasional plane ride. That's what he's used to, though, as he and his family have been away from home for well over half of 2012 (daughters Kailee, 10, and Kassidy, 7, are home-schooled and travel with him and wife Alicia in a motorhome).

They've been back in Arizona for about a week now, and the plan is to stay there through the holidays and into the new year. The only thing on the immediate agenda is elk hunting – he'll do some on his own or with friends and will also host several week-long guided trips.

"We bring people in to hunt and put them up at the house, and my wife does the cooking," he said. "We used to do a lot more of that kind of thing, and we're kind of getting back into it. We'll probably do four this season." 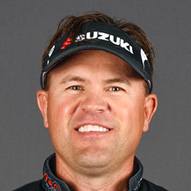