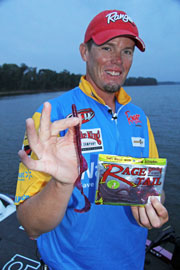 Keith Combs threw an 8-inch worm around clusters of stumps at Rayburn.

It didn’t take long last week for the pros to come to the realization that Sam Rayburn Reservoir was a little off in terms of the quality of fishing.

Fish were scattered from the bank out to 25 or 30 feet, holding in hyrdrilla mats or around offshore wood or sharp breaks, and only a small percentage of the field was fortunate enough to collide with a “difference maker,” as North Carolina pro Chris Baumgardner called his 7 1/2-pounder on day 2.

Those fish were tough to pattern and even tougher to get in the boat. Dialing in on a consistent bite was a difficult proposition as well. While winner Phil Marks concentrated almost exclusively on drains and ditches on main-lake flats and had a magnificent final day to skew the final results, others found it necessary to have grass-related fish in addition to offshore areas.

Of those who finished in the Top 5, though, only Landan Ware, who finished 4th, committed to a combo game plan and it ultimately took between 13 and 16 pounds a day to score a Top-5 result, which illustrates just how funky the bite was at what’s historically been a big-fish factory.

Here’s a breakdown of how the rest of the Top 5 went about their business at Rayburn.

Coming into the tournament, Keith Combs was fairly convinced the event would be won by someone fishing shallow and pulling 6-pounders out of the matted hydrilla. He had planned to start offshore and hopefully catch a good limit before heading in to focus on upgrades.

When the shallow bite evaporated on him the first day, he then committed to offshore stumps and ridges and came away with his third Top-3 finish of 2012. He credits a 4-day study session at Rayburn before the lake went off limits for helping him pinpoint offshore areas he thought would serve as Plan B spots if the need arose.

“I know the areas of the lake where I’ve caught big fish before and I just wanted to stay close to those areas and find a lot of key features in those,” he said. “By that, I mean I was looking for new brush. There’s a lot of brush in Rayburn, but you have to distinguish what kind is good and what’s not. Those fish have options of what they can do. Newer brush tends to be good.

“That’s what I caught a lot of my fish in. A lot of my better fish came on the ends of ridges. They didn’t have brush, but they had four or five stumps and a lot of that stuff I actually got to see last year when the lake was real low.”

He started strong with nearly identical 16-plus pound bags the first 2 days that landed him in the lead. He slipped to 15 pounds on day 3, which opened the door for Marks to take over the top spot.

The majority of his weigh fish fell for a Texas-rigged 8-inch worm that he fished slowly along the bottom in 24 feet of water. When he’d throw a deep-diving crankbait, he’d try to parallel the ridges to entice bites.

> He swapped out the stock hooks on the 6XD for size 2 Owner Stinger trebles.

> Main factor in his success – “Spending time there before it went off limits. I spent the time out (deep) just in case, just to find a few more spots so in that time I ended up finding everything that panned out for me.”

> Performance edge – “Humminbird Side Imaging. The best stuff was stuff I found in pre-practice. They weren’t really things I’d fished before. I was in areas of the lake that I like to fish, but that stuff is so good that you can tell if it’s a new brush pile and still has leaves on it or if it’s an old brush pile that somebody sunk 2 or 3 years ago. This lake has gotten so low a couple times that a couple of the stumps are what I call spider stumps because they have this dramatic root system that just goes everywhere. They’re huge stumps, but they’re completely washed out and when you can find a cluster of those, it’s money in the bank that there will be fish around those sometime during the day. When you can find them in 18 to 20 feet of water, it’s guaranteed. Without that Side Imaging, I wouldn’t have cracked the Top 10.” 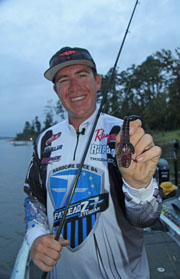 One look at Jacob Wheeler’s weights for the tournament and it’ll tell you all you need to know: It was pretty darn hard to stay consistent.

The Indianapolis native focused exclusively on grass mats midway back along the sides of major creek arms and caught 90 percent of his fish on the same bait that helped him win the Forrest Wood Cup and then three more smaller tournaments back home since then.

“I love fishing shallow and it was no different on Sam Rayburn. I fished shallow the whole tournament and had a fun time,” he said. “Those fish hadn’t pulled all the way back to the very backs of the creeks and I felt like a majority of the fish in those major creeks were about halfway back on the sides. Where there was a major mat or where a point came out in a major creek that’s where I caught them.”

He tried to work on a topwater pattern on the first day since that’s what produced some of his better bites in practice, but he opted to fish the conditions and that dictated that he should stick with the creek-arm grass in 6 to 8 feet of water.

“There were a lot of mats out there, but the ones I was fishing had a creek channel close to them or a really sharp break on the side of a point,” he said. “I was always looking for irregularities in those mats. Maybe it was a little clump that stuck out a little farther or a spot that was thicker or thinner. It was always about irregularities. The fish keyed in on that stuff.”

> He caught his best fish flipping the Carolina bug color when it was cloudy and when it was sunny, the black red flake pattern produced better. He started the tournament with just five bags of the baits and by the final day had resorted to super-gluing them back together and dipping others in black dye to mimic the best-performing colors.

> Main factor in his success – “Just fishing my strength was a big thing. I was fishing how I wanted to fish and didn’t go into the tournament with any preconceived notions. I just rolled with it. That was a really big thing. Adapting to every condition was huge.”

> Performance edge – “My Power-Poles were a huge part of flipping those mats. Obviously, the Trigger X Goo Bug was by far, in my opinion, the deal. I know I wouldn’t have been in this position without it.” 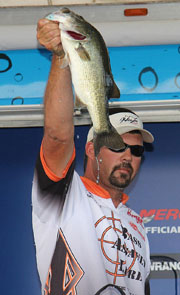 Landan Ware came to Rayburn full of confidence after winning the Lake Richland Chambers Media Bass Championship with partner Russell Lee the weekend before the Rayburn Open. While he was only able to practice for 2 days, he went into the tournament with an open mind knowing he’d likely need to mix and match deep and shallow areas throughout the week.

His fish on days 1 and 2 came cranking deep brush piles in 25 feet of water. He caught some suspended fish as well that way.

“I looked for some brush piles and looked around with my Lowrance SideScan,” he said. “I already had a few, but my brush pile holes were slimmer because the lake came up 13 feet. When it got down, a lot of those brush piles were gone. They got moved or whatever and I hadn’t had a chance to come over there and look for them.

“I felt like some of my holes were getting burned up after the first 2 days. The weather changed and I went shallow (on day 4) and it worked out. When they quit biting I went back out deep.”

The last 2 days, he relied upon a topwater bite with a Spook and a popper-style plug.

> He swapped the stock hooks on the DD22 for size 2 Mustad KVD Elite Short Shank trebles.

> He tried throwing the Strike King 6XD, but had better success with the DD22. “It has a little bigger wobble and for whatever reason, I had more success on that bait.”

> Main factor in his success – “Being versatile and being comfortable fishing shallow in the grass and being willing to run out deep and then coming back to keep fishing shallow. It didn’t bother me and I had to do it both ways to get it done.”

> Performance edge – “My Lowrance SideScan. I could actually see the fish in the brush out beside me. I have the transducer on my trolling motor so I could move my trolling motor one way and if there’s a brush pile to the right or if there’s fish around that brush, you can see those fish. It’s crazy.” 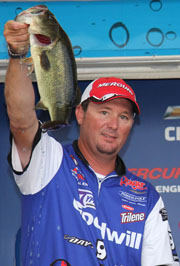 
Chad Grigsby was in his element fishing grass at Rayburn.

Chad Grigsby had only heard stories about Rayburn and the potential it held. He’d never actually laid eyes on the water until the first day of practice. He was unequivocally unimpressed through the first 1 1/2 days of practice as he caught nothing but 14- and 15-inchers fishing pockets with a squarebill crankbait and cranking offshore.

“This place has to be better than this,” he remembers thinking to himself.

Then he spent a couple hours flipping grass mats on the second day of practice and caught a 7-pounder on his first spot. That prompted him to spent the last day searching for similar mats.

“It evolved during the tournament what I needed to look for,” he said. “I had two areas where I’d gotten a bunch of bites and then I learned what they were on and I just kept going with it throughout the tournament.

“They were on the edges because that’s where the deep water was. It looked like an old river channel because you could run your boat right down between them and flip to either side.”

He alternated between flipping a jig and a beaver-style bait during the tournament and found most of the fist were right up under the mat.

“It’s just more fun to me than just going out and graphing around. I like doing that, but it’s more to me to grind it out. You don’t get as many bites doing this, but when you do it’s more violent. Your line jumps through the grass. I like that style of fishing.”

> He also flipped a Gambler Why Not (junebug) on a 6/0 VMC flipping hook under a 1.5-ounce weight.

> Main factor in his success – “Being patient more than anything. The bites didn’t come fast and furious. You had to be committed to it or go do something else. A lot of guys I talked to you were like, ‘Man, I flipped grass for like 2 hours and never had a bite.’ So did I, but then after 2 1/2 hours, I caught two on back-to-back casts. One thing that helped was when I went out deep, all I saw were little ones so I knew that wouldn’t do me any good. I knew I had to grind it out for 8 hours and if I got five bites, they were going to be 13 or 14 pounds or they could be 20.”

> Performance edge – “Power-Poles. As much as the wind was blowing the last 2 days, even though a lot of the areas were 10 feet deep, you could still put them down and they’d drag through the grass and slow you down enough where you could actually fish.”