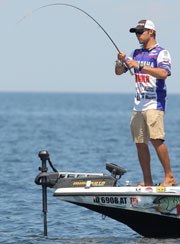 Brandon Palaniuk moved out to deeper water on day 4.

Aside from winner Jonathon VanDam and a handful of other anglers, the Lake Michigan Elite Series was the first time many Elite pros had launched their boat at that particular Great Lake.

Once they all got their bearings on the big water, an old-fashioned clear-water smallmouth derby broke out with pros relying on the dropshot to catch a good portion of their fish. Other typical smallie techniques played as well, such as jerkbaits (both soft and hard) and topwaters. One angler even went the hair-jig route.

A commonality among the top finishers was most of their fish came out of less than 20 feet of water and in most cases, less than 10, as they found the fish either heading up to spawn or on their way out to the first deeper water after their annual ritual.

Here’s an overview of how the rest of the Top-5 finishers put fish in the boat.

Based on the fishable water the field had access to, runner-up Brandon Palaniuk knew right away the northern portion of that zone would hold the majority of the fish.

“That also meant most of the boats would be there, too,” he said.

He did his due diligence in practice in the areas that got hammered during the tournament, but couldn’t get on anything he felt gave him a shot to win.

“The third day of practice, I burned every drop of gas and every volt in my trolling motor battery running around looking at a lot of stuff,” he said. “I found one spot right before I had to head in and spent about 30 minutes there.”

The spot had everything an angler would want in terms of fish-holding structure. There was an isolated shoal with a small depression that dropped to 7 feet on one side. It also had some rock and grass and it was close to deep water.

“I had to build on it every day,” he said. “The first couple days, I’d be done by 9 or 10 in the morning and I’d just spend more time breaking down the area even more. Having that area to myself helped a lot. It allowed me to be able to manage them better.”

He caught his day-1 weight on a topwater walking bait and a suspending jerkbait in the calm conditions. Everything on day 2 came on the jerkbait.

By day 3, he knew every nook and cranny and it allowed him to take the lead with a 21-02 stringer, which he caught on the topwater and jerkbait. The first 3 days, many of his fish came out of 2 to 6 feet.

He finally broke out the dropshot on the final day when he caught 20-plus again as the fish pushed out to 25 feet.

> He swapped out the stock hooks for VMC trebles on both the walking bait and jerkbait.

> Main factor in his success – “Thinking outside the box and with an open mind. That was the biggest deal and making the gamble to get away from the crowd and fishing something more toward the south.”

> Performance edge – “My Skeeter (boat) and Yamaha (motor) were pretty sweet. They gave me the confidence to run hundreds of miles this week. You don’t know what the Great Lakes will bring you, but having the condifence to take off and run 40 miles, it puts your mind at ease.” 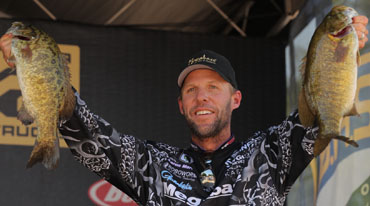 
Aaron Martens had the best success when he moved from school to school.

Aaron Martens was in his element last week, chasing wads of smallies in clear water with a spinning rod in his hand.

“The fish were schooled up and you could find them on your graph,” he said. “That’s what I live for.”

He started his practice up north in Little Sturgeon Bay and got 50 bites – enough to convince him that’s the area he needed to be in even though he knew he’d have company.

“They may have cut us off in only so much water, but it really was a lot of water,” he said. “I was never really able to get to everything. There was enough fish for everyone. It made for an interesting tournament.”

He benefited from an early-morning flurry on day 1 that helped him weigh 20 pounds even to take the lead. Most of his weight early in the event came off an offshore point, but crowding forced him to bounce around on days 2 and 3.

“I found a lot of schools on my trolling motor,” he said. “You had to just fish around and watch your graph. I was constantly moving around. I did way better when I moved around.”

> He downsized to 5-pounder Sniper on the final 2 days and had numerous 5-minute fights to land fish.

> Main factor in his success – “Constantly moving around. I did way better when I moved around.”

> Performance edge – “My Phoenix boat is just sick. It’s an unreal ride. I don’t think I hit one wave hard this week.” 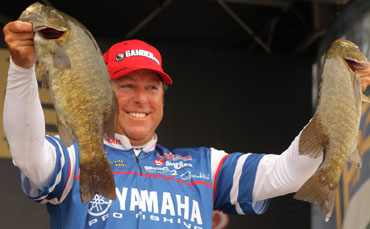 
Dean Rojas took a Top-5 on a lake he'd never seen before.

Dean Rojas was one of the pros who’d never fished Lake Michigan before, but he also knew it’d be won up north near the boundary line. When he gets on new water, he relies on his strengths and while the frog rod never made its way onto the deck, he did focus on shallow-water fish.

He was boat No. 4 on day 1 and was able to get on some bedding fish right away, which helped him weigh nearly 20 pounds to open the event in 2nd.

“Whenever I’m faced with a new body of water, I go with what I’m most comfortable with,” he said. “I found some bed-fish and those were the ones that got me started.”

He went the dropshot route on days 2 and 4 and mixed in more sight-fishing on day 3 to claim his second Top-5 of this season.

“When it was calm, you could see down 7 or 8 feet,” he noted. “It reminded me of Lake Mead and Lake Havasu back home. I know how to fish that stuff, so it worked out good for me.”

He owes a big thanks to Terry Scroggins, who invited him into his area on day 2 when Rojas was struggling in the morning.

“I’m very appreciative of his generosity,” he said. “He made my week a better week and I thank him for that.”

> He upsized his weight to 3/16-ounce when fishing away from shoreline and went lighter in shallow water.

> Main factor in his success – “Just keeping everything simple and fishing my strengths. I was really focused in on maximizing every day. The first 2 days I caught everything I could. The 3rd day I caught everything that would bite. On day 4, I caught all I could. It was a different strategy from (the Mississippi River). It was interesting.”

> Performance edge – “Obviously, my Yamaha and Skeeter, as well as my MotorGuide trolling motor and Power-Poles. Those four things are so cricuial for fishing shallow like I like to do. They’re everything to me.” 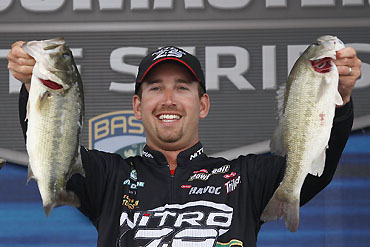 
Ott DeFoe had three areas that produced for him.

Like many Elites, Ott DeFoe wasn’t thrilled with the boundaries that were put in place for the tournament, but he certainly made the most of it, averaging more than 15 pounds a day to score his best finish of the season (he was also 5th at the Bassmaster Classic).

“I wasn’t happy that we were penalized with where we could go,” he said. “But we were all on the same playing field and as long as that’s how it is, I’m good with it. Someone was still going to win and fish were going to be caught. We knew it wasn’t going to take 25 pounds a day to win and yes, we had to fish around each and that part stunk, but you just had to put your head down and make the most of it.”

He said the limited water meant a couple pieces of the puzzle were already in place.

“You knew the key area would likely be a 5-mile stretch of the lake and that they’d probably be in less than 15 or 10 feet of water,” he added.

He threw a soft plastic jerkbait to help him weigh fish from three different areas. He got off to a good start on day 1, catching 14 pounds in the first 45 minutes in Rileys Bay en route to a 16-11 stringer that put him in 13th place.

“If I could see one cruising, I’d make a cast out in front of them and let the bait fall right there,” he said. “You could catch them that way. I’d make bomb casts and see the fish come up to the surface. The first 2 days I caught them all that way.”

From there, he worked on main lake points and in Little Sturgeon, weighing between 14-11 and 15-even the final 3 days.

One unique thing he did was throw a small, black hair jig up shallow to locate some bedding fish.

“They’d follow it and some would bite it,” he said. “It usally got the attention of the bigger fish.”

> He threw the Jerk Shad weightless, but said the swivel and even the fluorocarbon leader imparted just enough downward pull to get the bait into the strike zone.

> Main factor in his success – “Being in a few good areas and keeping the bait in the water. It wasn’t a horribly long run, maybe 35 miles each way, and having pretty calm weather was pretty good.”

> Performance edge – “My Nitro boat and Mercury motor. They were key to me being able to run all that distance.”