Clunn In Position To Get Back Into Classic 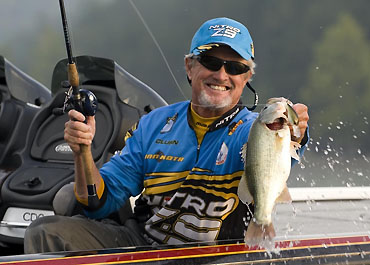 Rick Clunn's 32 Bassmaster Classic appearances are a record, but he's competed in just four of the past 11.

The Bassmaster Classic is the signature event of Rick Clunn's career, but it's been 22 years since the last of his record-tying four victories in the sport's premier showcase and he's participated in only four of the past 11. He's sat out the last three in a row.

This year he stands a good chance of breaking that non-qualification streak, however.

He's 35th in the Toyota Tundra B.A.S.S. Angler of the Year (AOY) race, which is right about where the cutline should eventually fall due to double-qualifiers. The dreaded Florida swing is long behind him and some summer-pattern fishing – at which he still excels – lies ahead.

He's finished one spot to each side of the 20th-place mark in the last two tournaments and he's headed for Toledo Bend, where he fished his very first competitive event more than four decades ago. And this time it won't be a bed-oriented derby, like the 2011 stop in which he ended up 94th.

"I'm fairly happy with where I'm at right now," the 65-year-old said in reference to the points race. "It still frustrates me to no end that I can't get out of Florida without being at the tow-end of the horses, and then I have to spend the rest of the year catching up and hoping I don't run out of time. But after 30 years of that, there aren't any excuses.

"The rest of the year, I'm pleased with."

Just making the Classic seems to be almost as difficult for Clunn these days as winning the event used to be. The spawn-based schedules of the past few years have been tough on him and he now wishes he hadn't let the sight-fishing revolution of the past quarter-century pass him by.

"I was too hard-headed in my early career to pick it up and take advantage of how few people were doing it," he said. "Now 80 percent of the anglers I'm competing against have been doing it since they were 6 years old. There are some little subtleties that guys use to separate themselves from the pack, and I've never learned those.

"I've always been reluctant to give too much credit to individual anglers, but collectively, this Elite bunch is a different breed. They're going to fish for the right fish and they're going to put those fish on the scales. It happens at all of these events and if you don't weight at least some big ones every day, you're not going to be competitive.

"I haven't done a great job (of adapting), but I am making progress," he continued. "I understood fairly quickly what I had to do, but I didn't have the discipline to implement it. It finally became a form of desperation, where I've had to do everything I could do to change."

As an example of how the competitive landscape has evolved, he pointed to the upcoming tournament at Green Bay on Lake Michigan (the "mystery" event for which the location was finally revealed last week). He'd love to go up there and throw a spinnerbait for the big smallmouths, as he did en route to winning a Bassmaster Tour event on New York's St. Lawrence River in 1992, but he's convinced that tactic won't work this time.

"It's a great way to fish because you can see the strike and it's just vicious when they hit it, and then they immediately come 2 feet out of the water. I know that bite will exist, but I have to have the discipline to realize that it won't put the right fish in the boat every day.

Clunn will be the only angler in the field at Green Bay with experience in any type of "mystery" event. The first three of his record 32 Classic appearances (and his first triumph) came during the period from 1974-76, when the location was still shrouded in secrecy until the competitors, their wives and the press observers were headed there in an airplane. 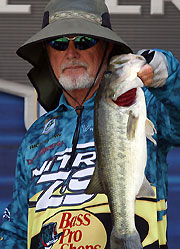 
Clunn will be the only angler at Green Bay with any type of experience in a "mystery" event.

He loves the format, but the site of this one worries him a bit.

"One thing is, being a Southern fisherman, I could go there and have the greatest smallmouth day of my life and not be in the Top 50," he said. "You could literally catch 4-pounders all day long and if somebody else has caught 5s all day, then he'll be 5 pounds ahead of you. That would just be a matter of not being on the right school.

"The other thing I'm concerned about is the possibility of not getting much time to practice for a deep-water event like that. If we get there and the winds blow 40 mph for the first 2 practice days, then you're in trouble. The only good thing is 90 percent of us would all be in that same boat, but guys like Jonathan VanDam or Travis Manson (both of whom fished the recent Sturgeon Bay Open on Michigan) would at least have an idea about where to start."

> Clunn came close to winning four consecutive Classics in the 1970s – he followed up his victories at Guntersville in '76 and the Kissimmee Chain in '77 with a runner-up showing at Ross Barnett in '78 and a 3rd at Texoma in '79. "That will never be duplicated," he said. "I controlled the event, but I understood it like nobody else. You didn't have the quality of pre-Classic info back then, and now it's a whole different ballgame."

> He's about 70 percent certain he'll compete in the WON Bass U.S. Open (an event he regards almost as highly as the Classic) Sept. 10-12 at Nevada's Lake Mead. "The Fort Gibson (Bassmaster Central Open) is on top of it, but Mead's such a fair lake to fish," he said, implying that most of the field is on equal footing when practice begins and there's very little local advantage. "That won't be the case at Fort Gibson, where you'll be knocking heads with Tommy Biffle and the brushpile boys." 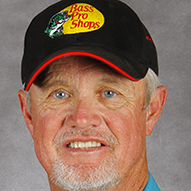