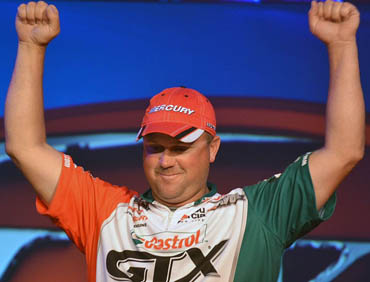 David Dudley will attempt to follow up his win at Beaver with a victory on a venue that's much closer to home.

Crowding is always a big factor in tour-level events at the Potomac River, and it'll play an even bigger role than usual this week in the fourth FLW Tour Major of the year.

The river doesn't have nearly as much grass as it did at this time a year ago, when the Tour visited for an Open that was won by Luke Clausen. In fact, the upper third of the portion that's in play for the Tour competitors (including Dogue Creek, where Clausen won) is almost entirely devoid of it.

There's some green stuff farther south, and it's holding fish, but those who key on it will have plenty of company. The best hard-cover locales will be popular as well as the 3-pound-plus fish are concentrated only in select places and catchable only at certain times (mostly predicated on the tides).

Compounding matters, the playing field has been reduced a bit this year due to the BFL All-American, which will run concurrently with the Tour event. Everything north of the Woodrow Wilson Bridge is reserved for the All-American qualifiers. That stretch historically hasn't produced a lot of high finishes for the tour pros, but it's nonetheless an option that's off the table this time.

Before delving deeper into the bite, here's some of the lowdown on the fishery itself.

Where'd all the Grass Go?

There's no simple explanation for the dearth of grass on the Potomac this year. Steve Chaconas, a longtime guide on the river, said it's likely just a natural phenomenon based on the environmental conditions of the past several years.

"It doesn't affect the fish nearly as much as the fishermen," he said. "It just means there won't be gangs of big fish in places where they've been before. Right now, if you go to the places that have the bigger populations, you're going to be mixing it up in the crowds."

There's lots of hard stuff to fish – scattered wood, dropoffs, shell beds, old barges, etc. A guy who can run a string of those places and disregard the grass entirely might have less company, but he's still unlikely to be performing a solo act.

The fishery is extremely healthy – there are fat and scrappy 2 1/2-pounders just about everywhere. Limits won't be much of an issue, but there aren't enough 3-plus-pounders to go around. Competitors who can catch one or two of those a day will pull away from the huge pack of low-teens sacks. 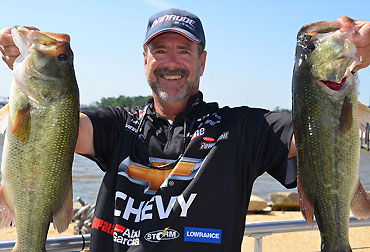 
Larry Nixon said the Potomac is fishing differently than he's ever seen it during his long career.

Several anglers mentioned that they've encountered fish in all three stages of the spawn, and Chaconas said another wave of bed-minded females could arrive this week. And as always, much of the action will be determined by the tides – some prefer the final stages of the incoming, while others like to fish around the low-water period.

Some massive bags were caught this spring when the reproduction ritual was at its peak, but things have ratcheted down since then.

"The river gets heavy pressure," Chaconas said. "With the guys at this level, I'd expect to see a 20-pound bag every day, but it'll probably take an average of between 16 and 18 to win."

Here are practice notes from some anglers who'll be competing this week.

Brandon Coulter
"I had a pretty good practice. There's a lot of bites out there and there's going to be a lot of fish caught. The key is trying to find the bigger ones.

"I don't think they're as far off the beds as they usually are when we come here, and that's making the females kind of scarce. It's pretty typical, though – the Potomac doesn't vary a whole lot. If you can catch 12 1/2 to 13 1/2 pounds a day you'll get paid and if you can get up into the 14s or a hair above you'll make the Top-20 cut, and the weights are going to be stacked up.

"There's a lot of 2 1/2-pounders biting, but that can change – this place can get tough on tournament day. You can get 20 bites a day in practice, and then maybe seven or eight in the tournament. But they're biting good right now and the whole thing is trying to find a decent one."

Brent Long
"I'm just junk-fishing and I've gotten a couple of quality bites, but I've had to cover a lot of water between bites. There just doesn't seem to be a lot of stuff in any one place and I'm having to run around a lot to find the cover I like to fish.

"I'm probably going to fish the grass some, but I'm hoping to fish around enough to have a limit before I go to the grass and try to get a bigger bite. Less grass is going to make it fish a lot smaller and the areas that do have grass are going to be crowded.

"I feel like I can get some 3-pounders fishing some different ways."

Larry Nixon
"This is different than I've ever seen the Potomac – there's so many fish it's ridiculous, but to get over 13 or 14 pounds is a chore. I don't think I've got anything where there's a bunch of big ones, so I'm just going to have to weed through a bunch of fish and hope to do well.

"It seems like there's so many different ways to catch fish in so many areas. I've caught them in a foot of water and in 3 feet – they're scattered all over the place. There's some that haven't spawned and there's some that already have.

"On these tidal fisheries, every day is a new deal. Everybody's going to be on the same level, though, and it's going to fish a lot smaller than last year."

Dave Lefebre
"Practice was decent and we're hitting it at the right time, I think. The fish are in all phases of the spawn and everything's lining up perfectly for the whole field. We'll be able to fish both sides of the low tide, with the lowest part coming right in the middle of the day.

"After the last two tournaments (103rd- and 63rd-place finishes), I'm not confident in anything anymore, but I feel as good as I can about this one. I feel as good or better than I've ever felt going into a tournament here.

"It's definitely going to fish smaller, but with the fish being in all phases, they're scattered in places other than the grass this year. It's going to be crowded for the guys keying only on the grass, but there's other things going on as well."

Rusty Trancygier
"You can catch a ton of fish, but it's pretty hard to catch those 4- and 5-pounders. There's going to be a lot of 13- to 14-pound limits and you're going to need one or two key bites every day.

"It's the same old Potomac – everybody's going to be bunched up in a lot of the same places. There's less grass and it seems like things are a little further behind. There's not mats, just scattered grass here and there, but no thick stuff up at all.

"You can catch fish 25 different ways, but the key to success is going to be those big bites each day."

With the above in mind and more, here are BassFan's recommendations for the Top 10 to watch in this event.

1. David Dudley – Can the reigning Tour AOY notch his second straight victory? He's intimately familiar with this place and likes it a lot, so that's definitely a possibility.

2. Jacob Powroznik – His Potomac record on the Tour-level is a bit of a mixed bag, but this is his part of the country and he's fishing extremely well.

3. Cody Meyer – This is a new venue for him, but he's often at his best at places he's never seen before. Has plenty of tidal experience gleaned from the California Delta. 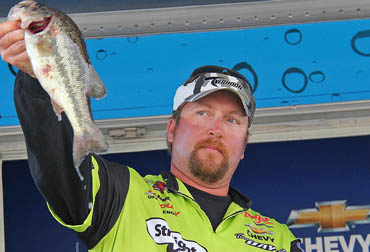 
J.T. Kenney, now a resident of Florida, seeks a second straight strong finish at the fishery he grew up on.

4. J.T. Kenney – The Maryland native used to struggle badly in these homecoming events, but he busted that string with a 12th last year. He could fare even better this time.

5. Ron Shuffield – He started a strong run of finishes with a 27th here a year ago and will be looking to bounce back after a 75th at Beaver. His long Potomac history includes events before grass became the predominant pattern, and that might serve him well this week.

6. Clifford Pirch – He's notched a couple of Top 20s here in his last three outings and late spring is prime time for him. Hasn't had a real high finish since his win at Chickamauga 13 months ago, so he might be due.

7. Shinchi Fukae – He's yet to hit his stride this year, with three finishes of 73rd or worse in four outings. He's posted Top 20s on each of his last two visits to the Potomac, though, and could give himself a big boost for the second half of the campaign.

8. David Fritts – He's finished no better than 87th in six events since he was 21st here a year ago. Having a greater percentage of the fish on hard cover due to the dearth of grass might play right into his hands.

9. Jason Christie – The Angler of the Year (AOY) leader bombed here last year (118th), but caught fire right after that and hasn't cooled down since. It should be a different story for him this time.

10. Jay Yelas – He's in serious contention for his third career Tour AOY and has loads of experience here spanning many years and all kinds of conditions. He should be able to solve the puzzle this week.

> BassFan Big Sticks Luke Clausen and Jay Yelas are resigned to having numerous boats in the vicinity during every cast they make on day 1. To read their practice wrapup reports, click here.