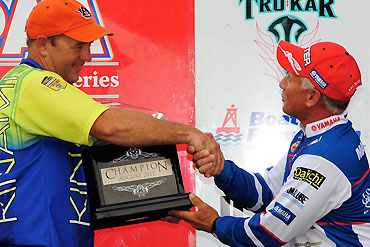 Steve Kennedy boxed big bags on each of the first 2 days of the Neely Henry PAA Tournament Series, and then caught just enough on day 3 to hang on for the win.

When a strategy has worked twice before under similar conditions, it'd be foolish not to try it again. And Steve Kennedy is no fool.

Kennedy had won a pair of 2-day BFL Super Tournaments at Alabama's Lake Neely Henry back around the turn of the century. In both cases, he'd used an aluminum boat (the only one he owned at the time) to get to the choked-off stretches of a particular creek arm.

He did the same thing last week at the 2010 PAA Tournament Series finale. Again, the area surrendered big weights for 2 days, and he scraped up just enough on day 3 to hold on for the victory.

His 38.12-pound total held off Greg Vinson, who'd caught the tournament-best sack on the final day to charge up the leaderboard from 12th place, by less than a quarter of a pound. It gave him a PAA triumph to go along with the Bassmaster Elite Series win he'd logged earlier this year at West Point.

Kennedy takes a different view of practice than some other top pros who spend every possible minute on the water. He has no qualms about limiting his scouting if he feels he's already found what he needs.

At West Point in May, he sat out the stormy middle day entirely. At Neely Henry last week, he skipped the final 2 days.

His practice consisted of a single trip up the creek to see if it was holding quality fish. A few hefty bites confirmed that it was. Session over.

Kennedy caught four solid spotted bass and a largemouth that was close to 5 pounds on day 1. They left him a pound and a half shy of leader Gary Yamamoto.

He encountered fish that were incredibly aggressive and pulled off of them at 10:30. He said he had a spot attempt to eat the blade on a spinnerbait while another fish was attached to the hook and one try to devour a plastic bait that had slid up his line after one of it cohorts had become impaled.

Day 2 was much tougher, but he nearly equaled his day-1 haul and took over the lead. After a dismal morning, he made a bait change and caught everything he weighed on his way back out of the creek. The key fish was a 5 1/4-pound largemouth.

Things really slowed down on day 3 – at least from the perspective of quality. Alabama Power had dropped the water level and the quality fish weren't in the same places where they'd been the previous 2 days.

He caught a bunch of spots, but only a couple threatened the 2-pound mark. He threw a Basstrix swimbait on the way back out and picked up a couple of larger specimens, including a long one with a concave belly that might've gone 2 3/4.

Without that one, he'd have been overtaken by Vinson.

Kennedy used numerous baits through the event. The list included a spinnerbait, a buzzbait, a jerkbait, a tube, a Kinami Flash and two different sizes of swimbaits. 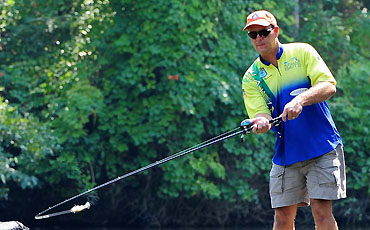 
Kennedy used a wide variety of baits en route to his win at Neely Henry.

"It took about 3 hours to fish all the way back in there, and I'd go in with one or two baits and then come back out with one or two other baits," he said. "You could go through with one bait one time and do well and the next time the same bait wouldn't do squat. It was one of those places where you had to keep switching."

He said that are places in the far reaches of the creek that are as deep as 8 feet, but most of his fish came from the 4- to 5-foot range.

"You go over areas that are a foot deep to get to the holes where the better fish are. There were four places with outside bends – I call them pools – that had fish in them. They'd be in little wolfpacks of four or five fish.

"The fish were never in the same place twice. There was never enough current to get them set up on anything, so they were just kind of roaming around. There was also some kind of algae growing that was almost snotty. You'd try to pitch a jig or something around that stuff, but once your line draped over it, you were done. Most of the bites were on reaction stuff in the more open water."

He said August-September is the only time of year when the creeks are a viable option at Neely Henry.

"Most of the time there's too much opportunity for somebody to catch 17 pounds from the main lake. But in these multi-day events in the late summer where 12 pounds is good, you can catch some big bags back there."

Here's a summary of some of the equipment Kennedy used on the various rigs that produced weigh-in fish.

> His reels included an older model Shimano Chronarch MG, a couple of Shimano Curados and an Abu Garcia Revo Premier.

> Lines were all fluorocarbon in pound-tests ranging from 12 to 20. He declined to name manufacturers.

> He was also mum on the specifics of some of his baits. The smaller swimbait was the same one he used at West Point. Of the jerkbait, he said, "Somebody might have won a (Bassmaster) Classic on it within the past few years."

> Main factor in his success – "Just being able to access the back of that creek in the aluminum boat."

> Kennedy recalled competing in a late-summer tournament at Neely Henry quite a few years back – ironically, it was put on by Yamamoto's bait company. He went up the creek and was baffled that he didn't catch anything, but then ran into George Crain, a 2011 Classic qualifier via the B.A.S.S. Federation Nation. "He'd gone up there ahead of me in a jet boat," he said. 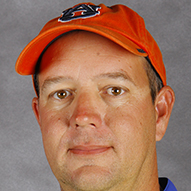