BACK
THE ALAN REPORT

Harris Chain: Weather Will Mean Everything 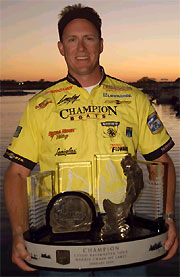 Keith Alan references an important historical footnote: The Harris Chain was the site of Skeet Reese's first tour-level win back in 2003.

(Editor's note: Former B.A.S.S. emcee Keith Alan lived and breathed the tour for a half-decade. This year, his Alan Report will break down each B.A.S.S. tour-level stop to help BassFans get the inside scoop.)

It's a good thing the Elite Series features many of the best bass anglers in the world, because they're about to get challenged. Central Florida's known for warm temperatures, mild winters and great bass fisheries. Those elements, coupled with some of the most reasonable real-estate values in the state, explains why thousands of retirees have relocated to waterfront property on or near the Harris Chain.

While both Okeechobee and Kissimmee may be more famous for big bass, and both are larger than Harris, neither has much shoreline development. As the Elite Series kicks off this week in Tavares, it's worth noting the number of people

who have nothing better to do than play bingo and fish the Harris Chain every week. It just might be the most heavily pressured lake in the state.

Despite the pressure, the Harris Chain coughs up more than its share of double-digit fish to locals every year. Big fish live there, and finding one or two will be critical this week because the biggest challenge facing the Harris Elite field seems to be consistency. Just ask Brian Snowden. Last time the Elite Series visited, he smashed them for 3 days. On the final day, his bite vanished and he conceded a 10-pound lead and the win to Mike McClelland.

Because it's so hard to be consistent for 4 days here, kicker fish are going to be at an absolute premium. One big fish in a limit of cookie cutters could get you to the money. Two good fish over the first 3 days could carry you all the way to Sunday.

The Harris Chain's 76,000 acres tend to fish pretty small, which has set the scene for a few confrontations over the years. Back in 2005, I remember David Dudley and Roland Martin getting into it in practice, and Jim Bitter and George Cochran having a pretty colorful exchange.

Things definitely get more intense if there's any spawning activity on Harris, as the sight-fishermen bump gunnels and jockey for position in the narrow residential canals. If that bite exists at all, it's going to be a race to get to those fish, since the few that may be available will get picked off on Thursday.

With that in mind, Thursday-morning boat numbers are going to be extra critical for anybody who may have marked bedding fish in practice. While conditions aren't really setting up for much in the way of bed-fishing, if you've got any big fish marked, you'd better get them on Thursday. By Friday, they'll be gone.

Much like the snowbirds and retirees who migrate to the Sunshine State, the fish in Florida don't care much for the cold. It's warmed up to the 70s and even touched the 80s in Central Florida over the past month, which is why we saw such big bags at the Toho Southern Open in late January and at the Okeechobee FLW Tour a week later. It's a sign that the first and second waves of spawners have already done the deed.

That said, there are too many fish in these lakes for them to all be done, which is why it's not uncommon to catch bedding bass from January through April in these parts.

It's my thought that weather conditions will dictate how this tournament's won, and the angler who can adjust with the weather and find a kicker fish or two along the way has a great shot at hoisting the trophy at week's end.

Thursday's going to be overcast and the wind's going to blow. That's nothing new for the Harris Chain in the spring. The leading edge of the front should make for some great fishing. Once it passes and the temps drop, it's going to get much tougher. If there are any fish even thinking about spawning, the front that's rolling through on Thursday afternoon will probably knock them right out of the mood. In fact, the front that came through Monday may have already taken care of that. 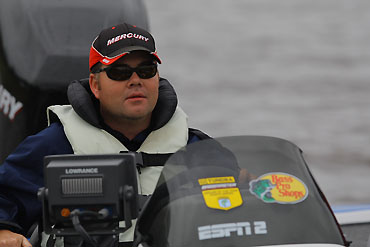 
Cold fronts are killers in Florida and the weather, according to Alan, will dictate how the tournament's won.

High skies for the rest of the tournament will help things warm up to the 60s and 70s after the front moves in, but overnight temps in the 40s mean that the water temperature will remain low and that's going to make fishing tough. If you're sitting in Iowa or Minnesota reading this, you're probably salivating over 40- to 70-degree weather, wondering how anybody could complain. Trust me, cold is relative. In central and south Florida, when the water temps drop below 68 degrees, it gets a lot harder to make 'em bite.

Albeit on a much smaller scale than the Louisiana Delta, the lay of the land's going to make for some important decisions. The lakes are connected by minimum-wake zones, which means you could log 45 minutes to an hour of idling time in each direction if you're running all the way up to Lake Griffin or the Oklawaha River like Bill Lowen did during the last visit.

Sacrificing fishing time for runtime didn't pay off then, nor did it pay off at the Classic. With Harris' reputation for breaking hearts, and the way conditions are shaping up, a pro would truly have to be confident he could catch them quick to sacrifice that much fishing time. Thursday it could happen, but after the temperature drops Friday, I expect the bites to come much slower.

KVD
Newsflash! He's the best bass fisherman on the planet. You could keep him off your fantasy team as a matter of principal, which is fine if you don't mind losing. If you want to win your league, go with a winner. He'll contend for AOY again at the end of the year, guaranteed. Beyond that, VanDam figured a little something out on his last visit to Florida when he won at Kissimmee. He thrives on tough tournaments and this one will be right up his alley.

Skeet Reese
I like him this week not just because he proved last season that he's capable of winning every event he enters, but also because he's won here before. It was the first event of his sophomore season on the Bassmaster Tour back in 2003. It was his first big B.A.S.S. win and a breakout moment in his career. He's come a long way since then, but you never forget your first.

The Florida Six-Pack
That's right: One big Peter T-sized team of bass-fishing studs, all of whom are capable of winning at Harris. Both Scroggins and Peter T call the St. Johns River home water, and they'll be the favorites there next week. It could mean back-to-back wins for the north Florida duo. Peter T won at Harris back in 2005 with a Carolina-rig. That technique could be the ticket when the bite gets tough. Regardless of what technique dominates, Scroggins will figure it out. It's a matter of time until he logs his first Elite Series win.

Then there's the Lane brothers. Bobby and Chris cut their teeth on lakes like this, and they know how to adjust when the bite gets tough in Florida. They finished 3rd and 4th here back in 2008. If that's not enough reason, consider this insider info: Chris just found out his wife's pregnant. Can you say "baby pattern?"

And don't forget veteran pros Shaw Grigsby and Bernie Schultz from Gainesville, Fla. As a Florida State University graduate, I was taught to loathe Florida Gators and everything else in Gainesville, but I really like these guys. You don't hear them mentioned as much as you used to, and I'm here to tell you that you'd better not count them out. They're both intimately familiar with the chain and how to catch them when the bite gets tough. Shaw's going to hoist that trophy again somewhere, someday soon. Bernie's got the skills to do it, but needs the stars, the moon and his mindset to align in order for that to happen. This event, less than 2 hours from his backyard, is likely his best opportunity of the year.

Aaron Martens
When the going gets tough, the tough go finesse fishing, and nobody does that better than Martens. Besides, he's probably over all of the 2nd-place-Classic-blunders talk from New Orleans and he's ready to move on. No better way to accomplish that than with a W.

Derek Remitz
After a red-hot rookie season, which included winning the very first Elite Series event he fished, Remitz was introduced to an evil force known as reality. It didn't take him long to learn that he needed to expand beyond soaking a jig, and has since developed into a very versatile angler. In the money in every single event he entered in 2010, he started out the 2011 campaign with a stellar performance at the Classic. Remitz loves fishing slow, and although he's forced himself to pick up the pace to contend with the Elite Series power-fishermen, the conditions this week in Florida could set up perfectly for him to settle back into his comfort zone.

Keith Alan spent the better part of the last decade traveling, working and fishing with the pros. His company, Ultimate Fishing Experience, offers on-the-water fishing clinics and trip-of-a-lifetime experiences with the biggest names in fishing.