Vision 110 Was The Common Denominator 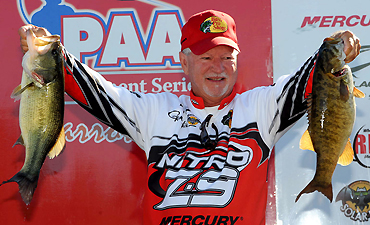 The lack of a fifth fish on day 3 proved costly for Stacey King.

It's rare that a tour-level event is completely dominated by a single bait, but that was the case last week at the FLW Tour Walmart Open at Beaver Lake in Arkansas. As Megabass pro-staffer and 4th-place finisher Randy Blaukat told BassFan after day 2, "If you're not throwing a Vision 110, you're probably not catching a lot of fish here."

There was very little hyperbole in that statement. A couple of guys who made the Top 10 (Stetson Blaylock and David Dudley) relied primarily on soft plastics, but the Japanese-made Ozarks fish-killer was a big part of the arsenal of the other eight under the late-winter/early pre-spawn conditions.

"It's a bait that the pros have been throwing for a couple of years, but they just haven't been saying a lot about it," Blaukat said. "This was a tournament where nobody could really hide it."

There were lots of anglers in the original field of 158 who threw it, too, and walked away without earning a cent. Those who fared the best were also keyed in on the "where" and the "how."

Stacey King topped the trio of "old-timers" who finished directly behind winner Bryan Thrift û he, Ron Shuffield and Blaukat were all regulars on the Bassmaster circuit before the FLW Tour came into existence in the mid-1990s. A four-fish bag on day 3 greatly hindered his victory hopes, and Thrift dashed them completely by catching a 4-pounder in the last 5 minutes of the final day.

In addition to the Vision 110, he also caught weigh-in finish on a Storm Wiggle Wart and a Cotton Cordell Super Shad. The latter is a vintage tail-spinner that's long out of production.

He switched back and forth between the three baits throughout the tournament. The jerkbait was most effective in the mornings, the Wiggle Wart produced well in the afternoons and the tail-spinner was the ticket when the sun was out and the wind was light.

Main factor in his success û "Probably persistence and having found three different workable patterns. When one died, I had other ones to fall back on."

Performance edge û "My biggest stringer came on the tail-spinner so I might say that, but if I hadn't caught the others on the Wiggle Wart and the jerkbait, it wouldn't have mattered." 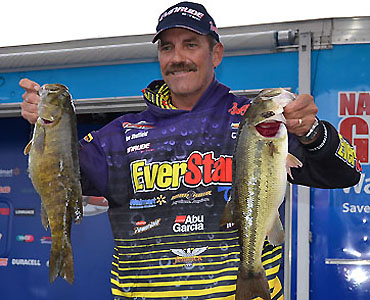 
Isolated rock formations were the key to Ron Shuffield's pattern.

Shuffield achieved a high finish despite a total catch that was four fish shy of the tournament limit. He led going into the final day, but his worst fears were realized when the much calmer conditions on the final day shut down his clear-water bite.

"Because of my poor first day, I didn't really get locked into any type of area," he said. "I really just kept practicing.

"Most of my fish ended up coming from isolated rock formations, whether they were in a pocket off the main lake or a creek. Some were boulders on flat points and some were veins of big rock like you see in a channel swing."

He had two baits in common with King û the Vision 110 and the Wiggle Wart.

Main factor in his success û "Weather played a key role û the clouds and wind on the second and third days really helped."

Performance edge û "The Trilene 100% Fluorocarbon allowed me to keep the jerkbait down deeper and let it stay fairly stationary û sometimes I'd have to let it sit quite a while to get a fish to bite it. Also, my Typhoon sunglasses let me see that isolated rock structure real well." 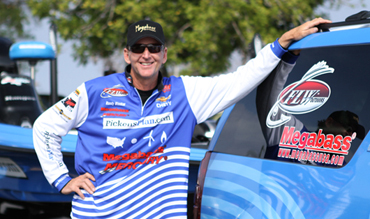 
Randy Blaukat managed to weigh a limit each day and his sacks got progressively larger as the event wore on.

Blaukat's weights kept improving as the tournament progressed. Like Shuffield, he did a lot of "practicing" during the event as he was frequently forced to depart from his primary areas on multiple occasions û either by crowding or uncooperative fish.

"Every day was a grind û none of them were easy," he said. "Eight keepers was the most I caught on any day.

"Because I wasn't getting very many bites, the important thing for me was to take it one fish at a time. I stayed focused and persistent and I was confident in my technique."

He threw a Vision 110 Silent Riser (no rattle) and another Megabass jerkbait, the Live X Revenge.

Main factor in his success û "Probably getting comfortable with the rhythm and cadence of the jerkbaits." 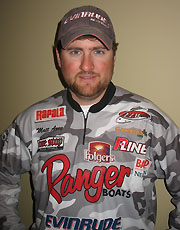 Unlike most competitors, Matt Arey suffered from no shortage of bites. He caught as many as 50 fish in a day and even boated a couple of dozen under the bluebird skies of day 4.

For him, it was a pure numbers game. He just kept working through fish after fish until he had the best bag he could compile.

"A lot of the lake was so dead, but the creek I was in was just alive," he said. "It didn't have a lot of timber in the middle of the channel so the fish made more of a push toward the bank.

"It was a little warmer than the main lake and it had some color to it. The key was the different transitions û where it went from chunk rock to pea gravel or pea gravel to bluffs. There were four or five different drains in there and some swings and turns that made good transitions."

The Vision 110 produced every fish he weighed in.

Main factor in his success û "Finding an area that had an active group of fish in it."

Performance edge û "I'd say the rod. When you're throwing a jerkbait for 4 straight days it's pretty stressful on your wrist and arm, and the lightness of it was a huge factor."