BACK
The Hart Incident 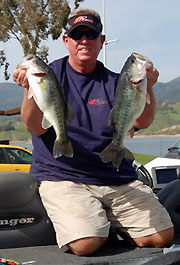 WON Bass authorities are working with their legal team to determine their next course of action against Mike Hart.

Cheating scandals most often occur at local- and regional-level events, which is perhaps why yesterday's events at the WON Bass U.S. Open continue to shock and amaze anglers across the country.

At the Open, WON Bass accused Winnetka, Calif. pro Mike Hart of cheating and banned him for life from all WON Bass competition. If true, the scandal marks the first time in several years that an angler at such a high level of competition was accused of cheating.

Paul Tormanen was arrested in 2005 at the Red River Bassmaster Central Open and charged with felony contest fraud. He later pleaded guilty to the charges, admitted he tied fish to stumps, and was sentenced to 2 years probation and ordered to pay fines and court costs totaling $588.50. Tormanen was also ordered to pay $3,000 in restitution to BASS and perform 120 hours of community service through an approved wildlife and fisheries organization.

In 2004, Tony Christian was DQd from consecutive FLW Tour events. FLW Outdoors failed to provide specifics about the consecutive DQs, other than to cite the rules under which Christian was DQd, but the lack of information from the league fueled rampant public speculation that cheating might have been involved.

The fact that a cheating scandal occurred at the U.S. Open is nonetheless shocking, given the high-profile nature of the event and the close-knit relationships shared by western pros. The effects continue to ripple through the sport.

BassFan today spoke with WON Bass director of operations Bill Egan, who was on the ground at the event when the allegations came to light.

At that point, Egan said, it wasn't clear who weighed the fish in question, but the list of anglers with three dead fish was limited. The organization thus decided to keep the matter quiet, but noted each angler who'd weighed three dead fish that day.

As those anglers came to the stage on day 3, it was determined that Hart was the angler stuffing weights into fish, Egan said. His catch was immediately inspected and the weights were revealed.

It was Egan's job to keep the weigh-in moving, so it wasn't until later that he caught up with Hart, who was in a friend's vehicle in the general vicinity of the weigh-in, Egan said.

"I talked to Mike and he made a confession," Egan told BassFan. "I went up to the truck and I saw him in the passenger side. I opened the driver's side door, got in the air conditioning, and (Hart) was pretty much slumped over in the (seat) with his hands over his face. He pretty much said, 'There's nothing I can say or do to make this better. I made a huge mistake. I could tell you all the reasons why I did it, but you probably don't want to hear it.'"

Egan then addressed Hart: "I basically said, 'I've never met you before, I only heard about you through fishing our tournaments. It's sad for me to be a part of this. It made me sick to my stomach to find those weights on (day 2)."

Egan said he then offered Hart the chance to address his peers and the crowd.

"I offered him the chance to be a man and go up on stage in front of the jury," Egan said. "(Hart) said he couldn't do that. I then told him I'd let people know how sorry he was, but he said he did it because he borrowed some money from somebody to fish the event and felt pressure to repay them, and it got the best of him."

Egan also noted that WON Bass officials are working with their legal team to decide the next course of action. It's not something he "wants to do," Egan said, but it's something he "has to do." And the goal is to "make an example" of Hart in order to uphold the integrity of the competition and discourage future incidents such as this.

"I will not tolerate this in my tournament organization," Egan said. "We as tournament organizations try our best to preserve the integrity of the sport by doing things that don't always make anglers happy, such as off-limits and things. But I think this is a clear statement about why we have to do these things. It's not that we want to – it's that we have to."

Also of interest from Egan: Along with a lifetime ban, WON Bass has also voided all Hart's past victories. Those victories were in team events, and Egan said he could not comment at this point about whether the victories will stand for Hart's past partners. But he did say that other tournament organizations, such as Angler's Choice, are following WON BASS's lead in regard to Hart's future eligibility.

BassFan spoke with several local authorities who could claim jurisdiction over the events in question.

Currently, there's no confirmation that Nevada authorities will pursue prosecution. There must first be a determination of whether Hart broke any Nevada laws. Then an investigation must be opened. 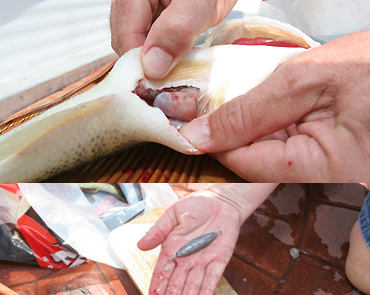 
A WON Bass photo that shows a weight extracted from the belly of a fish that Mike Hart allegedly presented at weigh-in yesterday.

A parallel set of circumstances occurred last fall in Texas. Several months later, angler Robby Rose pled guilty to charges that he cheated at the 2009 Ray Hubbard Bud Light Trail Big Bass Tournament and was sentenced to 15 days in jail and 5 years probation.

Typically, prosecution of such incidents falls under laws that prohibit contest fraud, but contest fraud can be difficult to prove, investigations can be lengthy, and the laws often focus on the contest purveyors, not the entrants. In the Rose incident at Ray Hubbard, it took 6 months from the date of infraction until sentencing in court. Texas game wardens conducted the investigation, and the matter was then turned over to the district attorney for prosecution.

Lt. Mike Maynard of the NDOW told BassFan that game wardens are currently looking into to the Hart incident to see if there's a prosecutable offense.

Andrew Munoz of the Lake Mead National Recreation Area Public Affairs Office today told BassFan: "Rangers were on scene during the incident, however, there wasn't any law or regulation we could apply in this instance. Breaking contest rules doesn't necessarily break any laws, so we didn't take any action on this other than standing by in case there was going to be any issues or arguments with officials. There wasn't, so we don't have any other details to report on this."

BassFan attempted to contact Hart, but available phone numbers were not in service.

There's been no public confession by Hart, so at this point, he's presumed innocent under the law. But Lake Mead is a border water with Arizona, so if NDOW does proceed with an investigation, and does determine that Hart crossed state lines and there is a prosecutable offense, he could potentially be charged in federal court, Lt. Maynard confirmed.

Hart has fished with several partners over the years, most recently John "Zank" Viazanko.

Viazanko today issued the following statement. It's reprinted in its entirety.

Viazanko's Statement
"I've fished tournaments for more than half of my life in the Southern California area. At one time, I was planning to move back east and compete on the Bassmaster Tour, but due to circumstances with sponsors, was unable to do so.

"As many of you know, I've been a part of the handpoured-worms craft for many years – basically, I've been a part of the bass-fishing community for most of my life. I've seen the ups and downs of the sport, experienced the highs and lows of it as well. As much as I've seen and experienced, nothing feels lower to me than what occurred yesterday when my team partner Mike Hart was caught at the U.S. Open adding weights to the fish he presented at the scales.

"Mike and I have been fishing team tournaments in Southern California for the past 3 years, and we've shared a great deal of success. But more importantly, aside from those wins and accomplishments, Mike has been a friend for nearly 25 years.

"I have no idea why Mike would have chosen to do what he did at the U.S. Open. He's a tremendous fisherman who has proven it on the water long before I started fishing with him, and after. Had I known that this was an option, I would have strongly encouraged him to reconsider.

"I never knew that this was something Mike would do. In my years of fishing with him, he never asked me to participate in anything such as this, nor did I ever have any sense that there was anything less than honest competition involved in our boat, and any of our catches.

"I don't like having to make such a statement, as it means having to distance myself from a friend of many years, but I did not, nor would I ever consider violating the competition rules of any tournament to gain an edge on my competition. I love to catch fish, I love the spirit of competition, and winning or losing in bass tournaments are a part of that spirit.

"I love Mike as a friend and brother, but would never have taken part in any activities like this with him, and again, had I known he was considering it, would have done everything in my power to change his course. I love this sport, and the bass-fishing community, and feel terribly for everyone involved – for Mike, his wife, WON Bass and the competitors of the U.S. Open, for Mike's friends and partners who have shared a boat with him.

"As a friend, I feel terrible for Mike. He loves fishing and loves to compete, and to know that it will not be an option for him as a result of his decisions is sad. For Mike, his wife and family, this is a sad day that will have consequences that will all have to settle out in the long run, but he will have to live with that now.

"These kinds of situations are never good for our sport. While things were handled properly by WON Bass, and the ultimate outcome is a public one, it will still have long-last(ing) repercussions to the integrity of our sport. I know there will be a difficult and painful period ahead, but I trust that it will all turn out better in the end."

> BassFan will remain in contact with WON Bass and local authorities and report on further developments.

> Due to the timeline of events at the U.S. Open, WON Bass DQd the weight of Hart's day-3 co-angler, but refunded his entry fee. Weights for his day-1 and day-2 co-anglers were allowed to stand.

> National Bass West president Lynne Peterson told BassFan today that Hart is banned from ever fishing National Bass in the future and his 2010 Angler of the Year title has been stripped. Hart's partner, co-titleholder Viazanko, will retain the title, she said.