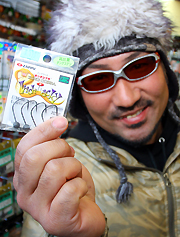 Hata Takuma (or "Taku" for short) has dreamed up many rigs, a few of which he showed to BassFan.

(Editor's note: BassFan's Jon Storm recently spent a week in Japan and writes of the experience in this continuing series.)

If there's the equivalent of a Mike Iaconelli in Japan, it's most certainly Hata Takuma, or "Taku" as he's better known.

This flamboyant, energetic young Osaka JB Top 50 pro may be a comedian, and dear to the hearts of young bass anglers across Japan, but when he's on the water, he's all business.

In fact, he's developed so many new rigs that he's garnered the honorific title of "Rig-Meister" in his home country.

U.S. anglers have fished some of his inventions – the Inchi Wacky (or Flick Shake as it's known here), as well as the sasuteki (or "Okeechobee") rig. But Taku's got plenty more where that came from.

During my time on the water with Taku, we discussed the Flick Shake and he revealed a new twist that utterly surprised me. He also demonstrated the sasuteki-rig, and turned me on to a hot new swim-jig combination that would be a spot-on killer in the heart of American swim-jig country.

What follows in an overview of the rigs, including their history, application and other notes from Taku. 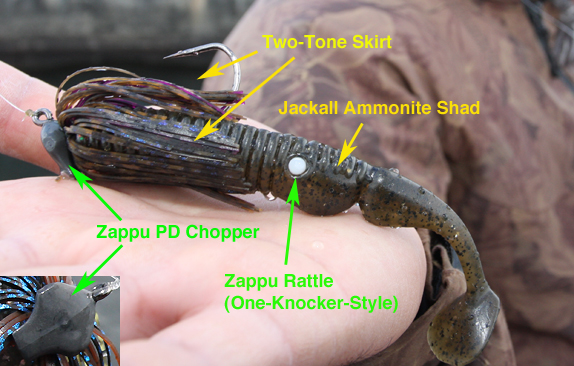 Of course, here in the States, the swim-jig has been red-hot for at least a decade, with variants like the ChatterBait, as well as different trailers, skirts, head-styles and such.

What's been a well-kept secret for many years in Japan is the combination of a paddle-tail-style swimbait (almost a giant grub) and a swim-jig. Over those years, refinements have led to what Taku believes is the very best combination for the technique.

The PD Chopper (PD is short for Pile Driver) features a noticeably unique head with a 90-degree attitude to the hook shaft. The front of the head is somewhat triangular, although it has a lower portion like a keel. As well, the whole flat face is slightly tapered to each side, so the head can't find center as it's retrieved. The result is a wild, erratic swimming action.

Taku explained that many anglers like to swim a football-head, but the PD Chopper creates a more side-to-side, horizontal swimming action.

Also important is the skirt, which is short (to flare more) and often two-tone on top and bottom, to present different flashing colors as the bait rolls.

The Jackall Ammonite Shad swimbait goes on the rear. The shape is pretty common in Japan, but Taku believes Jackall's Ammonite is the very best for the technique.

When I spoke with Jackall president Ty Ono, he said of all the baits the Jackall staff throws in its test tank, the Ammonite Shad is the only one the bass continue to bite again and again. He said they call it "God action" in Japan, because the bass never tire of it.

The name Ammonite is in reference to the ancient sea creature of the same name.

As for how to fish the PD-Chopper/Ammonite-Shad combo, you swim it just like any other swium-jig, but Taku feels it works best when ticked right along the bottom down to a maximum depth of about 10 feet. And it's at its peak anytime from October through early summer. 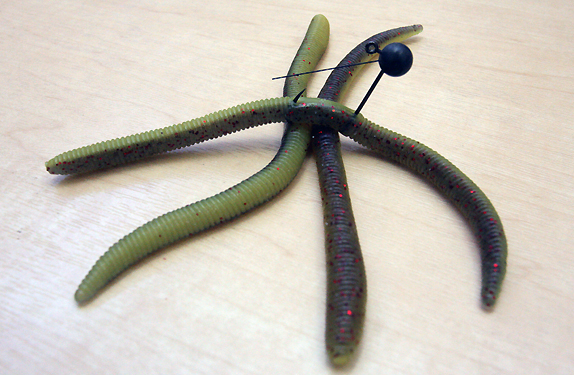 
To rig the octopus Flick Shake, thread three Jackall Flick Shake worms onto a Jackall Wacky jighead or Zappu Inchi Wacky (worms must be the 5.8 or 4.8 size), then take the first worm and rotate it over the hookpoint.

Remember when famed lure designer Seiji Kato won the co-angler division of the 2007 Amistad Bassmaster Elite Series? He threw a Jackall Flick Shake – a technique that was relatively unknown at the time. Taku invented the Inchi Wacky technique, and he and Kato ultimately created the Jackall Flick Shake worm for the presentation, which is what the technique is known as in the States.

What I didn't know, but learned at Jackall headquarters, was that Kato used an Octopus Flick Shake at Amistad. The rig looks outrageous, but it whacks big fish. It's nothing more than three Jackall Flick Shake worms wacky-rigged on a Jackall Wacky jighead or Zappu Inchi Wacky jighead.

First, Taku explained that he discovered the Flick Shake technique by accident. He was in a tournament in Korea, and his partner was hammering spotted bass with a wacky-rigged straight-tail worm. All Taku had were curlytails, which didn't work.

When Taku got back to Japan, he tried the technique with a straight-tail worm and it worked wonderfully. One day he caught so many fish that all he had left was a kinked worm in the bottom of the bag that he normally wouldn't throw. He strung it on and smoked 'em. Taku then worked out the details of the hook, and developed one that allowed the worm to stay put on the bend, rather than move side-to-side, and the Inchi Wacky technique was born – again, known as the Flick Shake in the States. 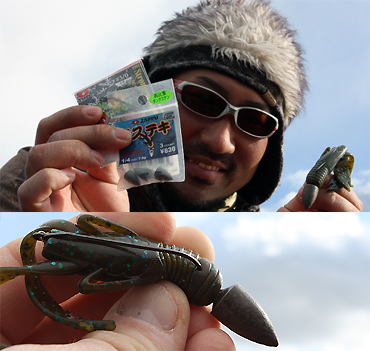 
The sasuteki-rig is a reverse Texas-rig – hence the syllable 'tek' preceded by 'sas.'

From that point, he dreamed up the octopus Flick Shake, which takes things much further and offers a wacky presentation that's obviously far bulkier and menacing. That's the rig that Kato threw at Amistad.

It's interesting that one of Taku's rigs came over to the States around 2005 or 2006, but has yet to hit the true mainstream. I say interesting because the Sasuteki-rig offers nothing short of a revolution in grass-fishing.

Over here, it's called the Okeechobee rig, yet rarely do you hear it mentioned as a go-to rig. Instead, so many anglers continue to plod along with a standard Texas rig, and fight to find baits that slip easily through matted vegetation.

It's named the Sasuteki-rig as a play on words. It's a backwards Texas-rig, hence the syllable "sas" followed by "tek."

The theory and execution are both amazingly simple. Thread a hook through the rear of a punch craw, rather than the front. Push a Zappu Sasuteki tungsten weight, which includes a wire loop, up into the head of the craw, then thread the hookpoint through the wire loop. Voila! The weight's now the first thing that hits the water, and the entire setup is incredibly compact and streamlined. Plus, because Zappu's weight comes to a sharp point, it acts like a spear-point as it cuts down through the grass. Lastly, the weight doesn't have to come through the fish's mouth as you set the hook.

Taku said that many anglers are using his rig in the U.S. (Sizmic offers a facsimile called the Warhead weight), but his favored componentry involves a Zappu Sasuteki weight, a Zappu Pile Driver Heavy hook and a Jackall Sasuteki craw (all products he helped design).

> After Taku discussed the sasuteki-rig, I asked him if there were any more rigs he could show me. He smiled and said, effectively, yes and no. Yes, there are more rigs. No, he couldn't show me – he wants an advantage this tournament season. But rest assured that when his new ideas do go public, BassFans will be the first to know.