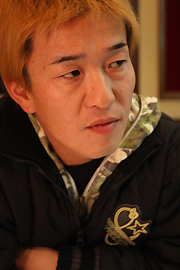 Storm met with Kurita in a crowded lunch cafeteria above the Osaka Tackle Show.

(Editor's note: BassFan's Jon Storm recently spent a week in Japan and writes of the experience in this continuing series.)

When I landed in Japan a little while back, I was like a lot of BassFans. I knew many of the details surrounding the new world-record largemouth bass from Japan. It was caught on live bait from Lake Biwa. It weighed 22 pounds, 4.97 ounces and hence tied George Perry's long-standing record (new IGFA records must eclipse the standing record by at least 2 ounces).

I also knew it was caught from an area that supposedly was off-limits, although as we know now, that was an error in translation. (More on that in a minute.) I also knew it was caught by a young gentleman named Manabu Kurita. But to me he was just a name. As opposed to George Perry, who seemed a familiar figure thanks to recollections and in-depth studies like Bill Babb's Remembering George Perry.

Kurita, unlike Perry, remained pretty much an enigma. During the initial record hoopla, even my network of Japanese contacts knew little about him.

Immediately I figured he must be reclusive – maybe one of those lone hunters, like a Bob Crupi, who keep their distance from everyone except the bass.

I wondered whether he was a Japanese version of Mike Long – obsessed with the quest for the record – or Mac Weakley. I've fished with Long, and gained Weakley's trust to the point where he granted me his final tell-all interview in the Dotty aftermath.

Over the years, I also interviewed Jed Dickerson when he caught Dotty the first time, and published an extensive piece with Kazuya Shimada after he caught the previous Japan record (19-15) from Lake Ikehara in 2003.

Next on my list was Kurita, and as the plane landed, I wondered how Kurita would fit within the other names in the world-record quest.

I quickly learned that I'd never know. My interview with Kurita had been canceled. He wasn't able to make the trip to Biwa to meet me, and likely wasn't going to the Osaka tackle show.

The truth, I soon learned, was that Kurita had yet to make a dime off his catch. He used live bait to catch the fish, so tackle companies weren't willing to support him much. He wasn't a pro angler, and thus didn't have sponsors who'd pay promotion and travel fees. He was therefore locked into a work schedule, and like most 33-year-old married folks here in the States or there in Japan, burned the candle at both ends just to make ends meet. Time? There was precious little for him.

I shook off the disappointment of not meeting Kurita and focused on the task at hand – fish with Japanese pros, tour facilities, and attend the tackle show.

But fate sometimes serves us a strange plate, and during the tackle show in Osaka, while I relaxed on a bench in the ultra-crowded lobby, a Japanese woman chose to rest her feet and sat down next to me.

She asked where I was from and I told her New York. She meant, "Where do you work?" I told her BassFan and she became very excited. She asked me to hold on for a moment, and when she returned, I stood face-to-face with Kurita.

Turns out she was Reika Senba – Kurita's publicist. Of the tens of thousands of people there, the two of us wound up on the same bench for the same brief moment in time, and Kurita the world-record holder was suddenly before me.

I felt immediately that here was a name and face so recognized in America, yet not a person at the tackle show even turned his or her head. Kurita appeared to dwell in anonymity at one of the world's biggest bass-tackle shows.

And to tell the truth, I didn't recognize him at first, as is often the case with photos vs. life. He looked more like an average person than he did in the world-record photos, now dressed in a plain nylon jacket, baggy jeans, and ragged-style orange hair – not the bleached blond he showed on world-record day. 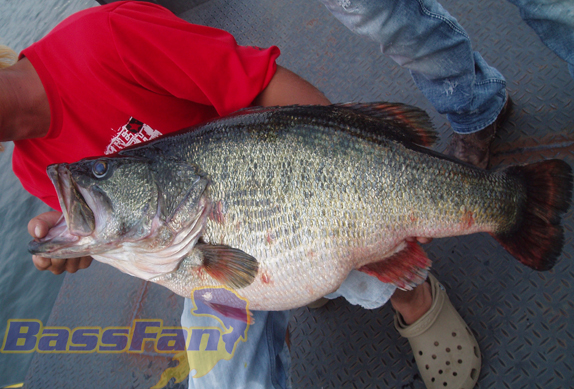 
A previously unreleased photo of the record bass – note the proportions of its mouth to Kurita's hand.

After greetings with much translation, we all agreed that we should have lunch, and went upstairs to a cafeteria. Kurita ordered a pancake. I ordered a bowl – a fish broth with some fried shrimp, pork and Japanese vegetables.

Kurita's buddy Jun Maeda was with him, who like Kurita, guides on Biwa.

There were several details about the catch that I wanted to confirm first-hand before I learned more about Kurita himself. This was for the benefit of history – there should be multiple records of personal interviews with the angler who tied one of the most important marks in all of sports.

According to Kurita, the day before he caught the world record, Biwa received heavy rains. He tried to fish the Biwa bridge, but the area was too muddy.

He returned to Biwa the next day and used a bluegill in a different area. He caught "an 8-pounder easy" and decided to try the bridge.

The initial controversy over the fishing location involved signs that prohibit stopping – meaning, no anchoring or tying off. Biwa can get very busy with boat traffic, hence authorities don't want folks to anchor around or between the bridge pilings.

Japanese pros don't fish the area. Those pros I talked to say they want to be examples – they're public figures who must never approach the possibility of violation, especially given the government's current sentiment toward black bass and its eradication programs already underway.

The public, however, fishes the area regularly. The IGFA came to the same conclusion – fishable area, game on.

Throughout the interview, what interested me most about Kurita's catch wasn't the catch itself – he said the fight lasted about 3 minutes, and he initially thought it was a 13- or 14-pound fish – but his attitude in the immediate aftermath.

See, Kurita didn't think he'd caught the world record. In his mind, Dotty (at around 25 pounds) was the world-record fish. In fact, when Kurita weighed the fish at the marina, he wasn't even sure what the world record was. He had Maeda call Deps president Okamura-san, who researched the mark and informed Kurita it was 22-04, not 25. 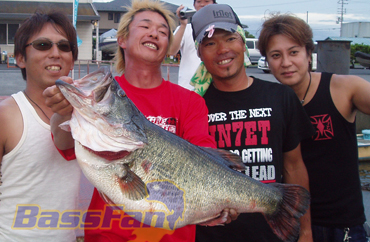 
Kurita with friends – immediately to his right is close pal and fellow guide Jun Maeda.

Kurita told me that even then he wasn't excited. He shrugged his shoulders, to show me how he felt at the time.

And most intriguing: Kurita said he saw many fish bigger than the world record, but he saw one in particular three times that he's sure was near 30 pounds and 36 inches. He saw her for the first time under a boat dock in February – less than 4 months before the record catch. He threw her one of his own Mother swimbaits from Roman-Made, but she wouldn't bite, nor would she be tempted by a bluegill. When he returned the day after next, she was gone.

Seven months after the catch, as I sat with Kurita in the cafeteria, it was plain his life changed little as a result of the record.

He'd had a few magazine interviews, he said, and he was on the news.

He still shuffles paperwork for car titles, in order to have enough money to fish and chase a stand-alone world-record bass. He still guides on Biwa when there's business.

Perhaps the world record would have made more of an impression on him if he'd not seen those other, bigger fish. And he does think Dotty was ultimately the bigger fish, no matter how it was caught. It all seems to have left him with the sense of a quest unfulfilled – like he pitched a no-hitter, instead of a perfect game.

Kurita appears to me much like myself, or any other BassFan who's haunted by dreams of what could be the largest black bass alive in the world. And a fish that's 4 or 5 pounds lighter, even if it ties the world record, still wouldn't chase that dream away. 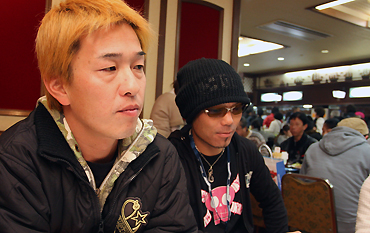 
Kurita and Maeda, after pancakes, speak with Storm about the catch and what's happened since.