BACK
Conversations With A Genius 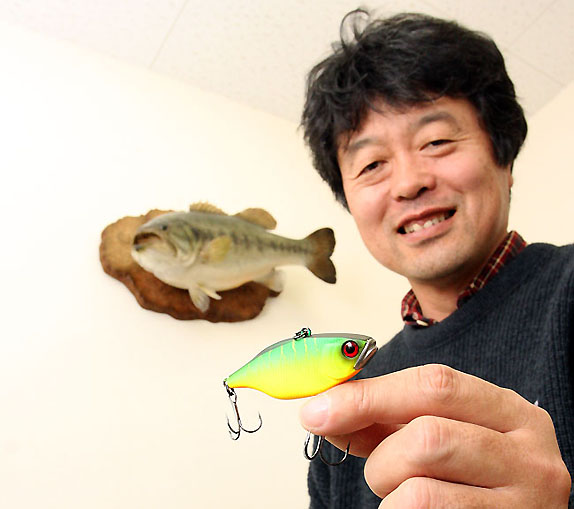 (Editor's note: BassFan's Jon Storm recently spent a week in Japan and writes of the experience in this continuing series. Below is part 1 of a 2-part article about famed lure designer Seiji Kato.)

Others dwell more in the background of the bass-fishing consciousness – Tom Seward, Jim Gowing, Lee Sisson.

And certainly in America there's one name that nearly everyone knows, yet doesn't. They throw his baits every day. They see his influence sprawled across tackle shelves everywhere.

Yes, there's the common understanding within the bass community that somewhere in Japan, more than a decade ago, luremaking turned a significant corner and changed the course of bait design both here and there.

But so few are able to connect a name – a person – to that revolution.

It's pretty astonishing, really, that the name Seiji Kato doesn't immediately elicit the same reverence in America as Heddon, Bagley or Rapala, because it could easily be argued that over the past 12 years, no other lure designer has had as much influence on hardbait design as Kato.

Strong statement. But true. From his early days with Daiwa and the revolutionary TD Minnow, to his time with Lucky Craft (a company created solely to showcase his talents), to his current tenure with Jackall Bros. (a company he co-created), Kato's lures have been winning millions of dollars and revolutionizing ideas about what hardbaits can and should do.

Not convinced? Below is a chart view of Kato's lure-design résumé from 1990 through 2006 – two sheets of paper he hastily printed and handed to me during our interview. It's incomplete – he became too busy in late 2006, he said, and stopped updating it. 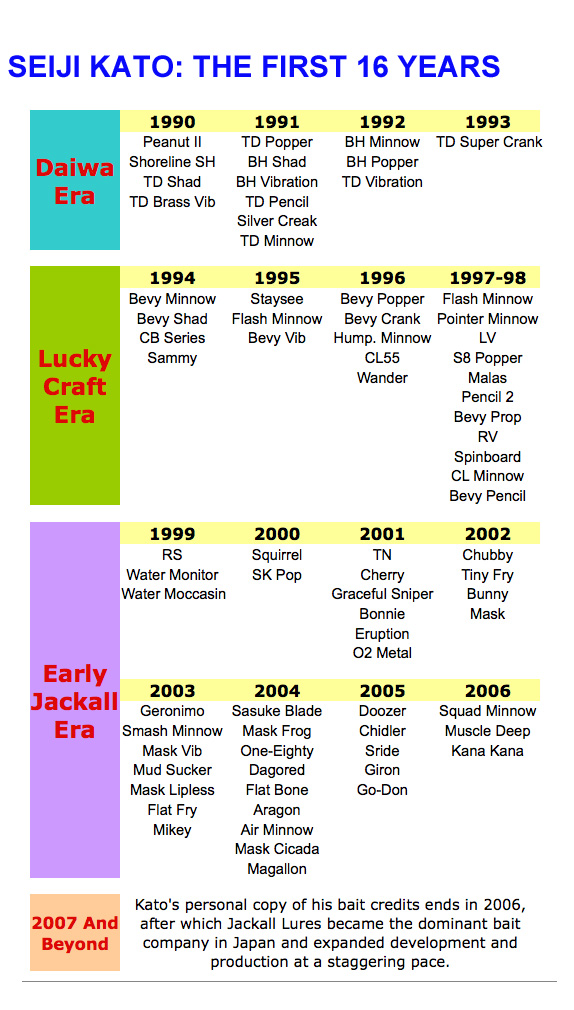 Immediately, BassFans will recognize design credits like the Lucky Craft Sammy, Pointer Minnow and LV rattlebait series, as well as Jackall baits like the Mikey, TN rattlebait and Mask jerkbait. Of course, Kato lays claim to scores of new lures from 2007 through today, including recent products like the Jackall Swimming Ninja, Flick-Shake and Sasuteki Craw.

During my recent trip to Japan, I had the rare opportunity, and the honor, to meet with Kato for an extended period.

I knew some of his story – his time with Daiwa, Lucky Craft and Jackall. His fishing skills – he's won a BASS event as a co-angler, and is a well-respected pro angler in Japan.

But Kato the man I didn't know. The smiling, personable, full-of-life lure creator whose passion runs so deep, his one dream is to create a mobile lure-making facility to follow the U.S. bass tours and create baits onsite, then hand them to pros. As he puts it, "to solve a different fishing puzzle each week."

The man who loves American steak so much, he eats it 3 times a day when he's in the States.

The man whose love of traditional Japanese cuisine runs deep – to a spiritual level.

The man who's wholly dedicated to his single greatest passion – fishing.

I scheduled an interview with Kato and arrived at Jackall headquarters on the shores of Lake Biwa in the late morning. Headquarters was abuzz with activity outside – the staff was packing for the Osaka Tackle Show, slated to start the following day.

I entered the Jackall building and, as is the custom, removed my shoes and put on slippers, which are stacked next to the door. The largest slipper was about a men's size 9, and my heel hung well off the back.

I was greeted by company president Ty Ono, who started Jackall in partnership with Kato. And like Kato, Ono is the hardest of the hardcore anglers. A pro himself, Ono was the JB Top 50 Angler of the Year in 2008, 2006 All Star Classic champion and winner of a recent Elite 5 tournament.

My interview with Kato took place in a small conference room – we sat with each other, sipped coffee, laughed a lot and talked lure design, lure history, techniques and much more.

After the interview concluded, Kato showed me his office – a small but interesting space where his competitive trophies and plaques are given significant space.

He showed me his computer-design programs, as well as his state-of-the-art prototype center.

Jackall made a substantial investment in technology, so Kato can design a bait, then send the specs to the computer next door where an automated sculpting machine carves out the design to exacting detail in a matter of hours. He can then walk out the door and start fishing Lake Biwa with it almost immediately.

That gives Jackall a significant advantage over competitors who must often carve a lure design from balsa, then have it converted to plastic, or who must send design specs to Chinese plants and await the return of prototypes.

We also examined the test tank, which streams water at consistent, but adjustable speeds in order to observe the swimming action of lures.

And although I learned a tremendous amount about Kato the designer during the interview and my tour of headquarters, it wasn't until that night in Osaka that I learned more about Kato the man.

After the interview concluded, I left Jackall headquarters and made the trip to Osaka in order to attend the Osaka Tackle Show the following day. Earlier, Kato had asked me to dinner that night – sushi, he said – so I met him in the lobby of the Hilton at 7:00.

We headed toward downtown Osaka in a taxi – an adventure itself, with twisting turns at 50 mph, a dash-mounted GPS gabbing in Japanese, elevated roadways and trainlines rushing overhead.

The taxi dropped us at the restaurant district – a series of tangled alleys wide enough to fit one car, with oceans of people briskly checking their watches, looking for friends, scurrying in front of crawling taxis. A scent of seafood and soy sauce hovered like sulfur around a coke oven.

Our restaurant was up three stories in a nondescript, old city structure – perhaps the only signifier a small red flag near the door with black Japanese lettering.

Through a small door, we removed our shoes and followed the waitress (dressed in a traditional kimono) through a paper door and into a traditional room – no chairs, but a table in a sunken floor.

In true Japanese style, we had food and drink in front of us within 2 minutes, and two waitresses were assigned to fulfill our every need. The sushi house seated between 8 and 10 people total, and Kato told me the last time he ate here, it was with the presidents of Shimano and Daiwa. 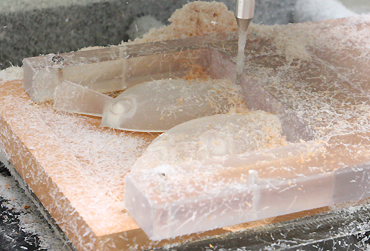 
Jackall Bros. invested heavily in technology. Now, after Kato designs a bait, an exacting prototype can be tooled and fished within a matter of hours.

Over the course of a lovely meal we conversed about fishing in America, fishing in Japan, the history of bait design, the culinary treasures set before us, our goals, our backgrounds, our plans for the future.

One by one, the waitresses brought new courses to us – smoked whale, a special cut of raw tuna, raw salmon eggs, fried pufferfish, mackerel eggs, raw shrimp, shellfish-liver paste, raw squid, a rare mollusk – each bite an adventure into the depths of the sea, a trip through thousands of years of tradition and culture, the meeting of two nations through the common love of bass and fishing.

After dinner, I said good-bye to Kato. I wouldn't speak with him again during the hectic Osaka Tackle Show. But I was left with the memory of having met someone I consider to be a living legend, and the impression that here was a man who designs from a pure love of what he does.

He's unpretentious, seems unconcerned with a monetary windfall, isn't consumed by jealousy or anger when his designs are mimicked or copied.

My respect for Kato-san is obvious. It was there before I ever landed in Japan. But so many times, we find that our heroes aren't what we think they are. We're disappointed, often, at heroes who appear consumed with their idea of who they are. Who fight to insert a record of themselves into the great march of history.

Not so for Kato, whose tremendous contribution to lure design he keeps as the incomplete Excel spreadsheet he handed me – a small record that can be printed onto two pages, yet spans several decades and shows a creative force few will likely ever match.

> Part 2 of this story features Storm's Q&A session with Kato.

> Special thanks to Yasutaka Ogasawara ("Oga"), who accompanied Storm throughout the trip as guide and interpreter.

> For more information on Jackall and its products, visit Jackall-Lures.com. The Japanese Jackall site, which shows many baits not yet available in America, can be found here.