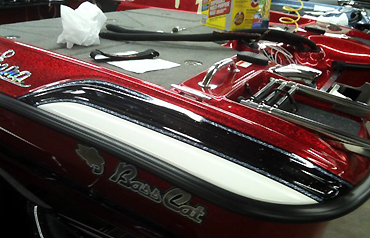 The public will first be able to touch Bass Cat's secret project, the Eyra, this Friday at the Bassmaster Classic Outdoor Expo.

The bass-boat cauldron recently began to stir with rumors of a new-look Bass Cat. The cauldron began to froth on Sunday when Bass Cat posted some pictures of the prototype on its Facebook Page. The cauldron should be at full boil come Friday, when Bass Cat will debut the new boat, called the Eyra, to the public at the Bassmaster Classic Outdoor Expo in Birmingham, Ala.

BassFan wanted to get an early taste of the cookings, though, and spoke with Bass Cat head man Rick Pierce.

According to Pierce, this is a brand new hull that's been developed in secret. As evidenced by the photos, the intent in clear: It's a streamlined, stunning, like-no-other design that in Pierce's words is meant to bridge the divide between the "fast-boat" people and "bass-boat" people.

Under Lock and Key

Like all Bass Cat boats, this one's named after a cat. The Eyra is a wild feline that ranges from southern Brazil to Texas. The animal's reddish-yellow, about the size of a domestic cat and very difficult to spot and observe.

Sort of the like the whole Eyra project itself.

"We kept this project inside the box – nobody really knows about it yet," Pierce said. "And we totally went back to the drawing board. This is an all-new hull, an all-new deck, an all-new console, the parts are all new – we're very excited.

"It's not in production yet – there'll be a few months yet getting it ready – but we're taking prototypes to the Classic."

Pierce provided BassFans with some details about the new boat. Here's an overview.

"We're trying to reach into a little different market for fuel efficiency and performance, and we wanted some versatility in horsepower," Pierce noted. "It can run from a 200 to 250 – take your pick. We don't have the final numbers (on speed), but it's going to be quick.

"And this boat has a lot of cosmetics and a tremendous amount of tooling time into it. There are a lot of little radiuses and details and body lines – a lot of those cosmetic breaks in it. There's a little mini strip on the hull, about 6" wide, that's actually concave. Everything has its own place." 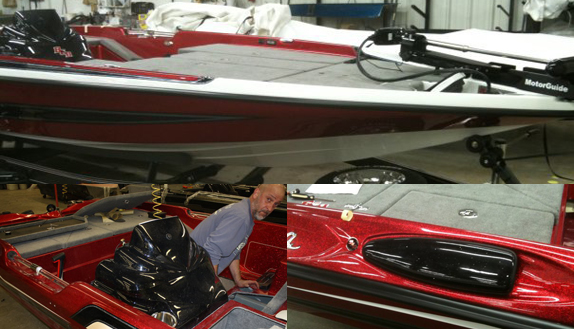 
Check out the cosmetic appointments, including the concave strip along the outside of the hull (lower right).

Pierce said that Bass Cat didn't gear the design toward a four-stroke engine, because such effort isn't needed anymore "with what happened at Yamaha" – in reference to Yamaha's new four-stroke VMax SHOs, which are actually lighter than two-strokes.

When asked where this boat fits into the current Bass Cat lineup, he described it as a premium model, but a "lower-level premium model" that should come in at a price point comparable to a 20' "wide" rig.

"I think it's really going to appeal to a new market, and today, I think you have to reach out to people who maybe wouldn't have looked at your product before. What we're trying to do is bridge the fast-boat and bass-boat guys – the guys who might look at Allison or Bullet and the guys committed to bass boats.

"It should be a little pocket rocket when it's all done. It's by far the most detailed body in a boat we've ever built."

The new Eyra prototypes will roll into Birmingham on Thursday in time for the opening of the Outdoor Expo on Friday. Pierce will be there, so BassFans who stop by the Bass Cat display booth should be able to meet with him and talk boats and bass.

> The Eyra name isn't new. Bass Cat actually sold Eyras in the 1990s, and they were some of the first round-body bass boats ever built.

> To visit Bass Cat's Facebook page, which features numerous photos of the design stages of the Eyra, click here.