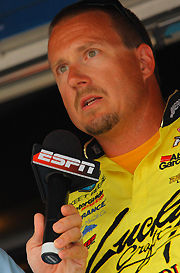 Skeet Reese could clinch the Angler of the Year title this week with a finish of 3rd or better.

Rain has arrived in south-central Alabama. Sustained storms this afternoon swept through the Montgomery area with some high winds, and significant precipitation is expected during the next 2 days as the final leg of the Toyota Trucks BASS Championship Week kicks off.

In general, the rain should help the bite on the Alabama River, which is largely suffering from the late-summer doldrums. But the field doesn't know quite what to expect when they launch tomorrow morning. That's because current is the much bigger factor at this venue.

Current activates the fish and makes them snap. If enough rain falls upriver, that could increase the generation schedule. It could also add plenty of color to the water which helps the bite as well.

Then again, Alabama Power might stick with its plan to draw

Lake Jordan down as scheduled. The field experienced that draw today starting at about 1:00. That's when the current started ripping and the fish became highly active. When it's not flowing, it's been tough and dirty runoff might not be enough to overcome that.

There's no lack of shoreline at this venue. The field has approximately 80 miles of river to fish, bordered by Walter Bouldin Dam to the north and Jones Bluff dam to the south. The Bouldin Dam has the largest generating capacity of any of Alabama Power's 14 hydro facilities.

As is typical, the northern stretch is quicker and more river-like, while the lower end is slower and more expansive. The pros thus face the agonizing decision of which way to head.

The field does have access to some backwaters, where they can primarily target largemouths.

As noted last week after the Lake Jordan leg finished up, only six of the Top 12 are mathematically alive in the Angler of the Year race, but more realistically, three (perhaps four) pros have a legitimate shot.

Here's a look at the current points standings. Total points are followed by distance from leader in red.

The fewest points Reese could finish with is 259 (12th place at the Alabama River awards 10 points). 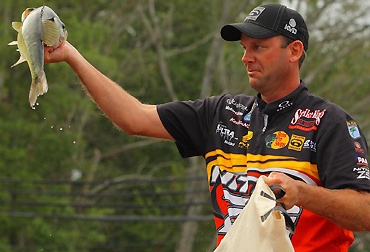 
Kevin VanDam is closest to Reese in the race.

Another way to look at it is Reese needs to reach 286 points to clinch the win, which would be 51 points ahead of VanDam's current points total. Reese could do that with a finish of 3rd or better.

On the other hand, if VanDam were to win this final leg, Reese would need to finish 4th or better to pass him.

Although Tommy Biffle isn't mathematically eliminated, he'd need Reese, VanDam and Ike to utterly cave. To be specific, if Reese finished last (12th) at the final leg, VanDam 11th and Ike 10th, Biffle would still need to finish 3rd or better to win the title.

Tiebreaker for points standings is total weight caught during post-season.

For those out of the AOY race, there's still plenty to fish for this week. There's pride, of course, and the ability to help sponsors through media and TV coverage.

But money's a big factor too. These are tough times in the sport with fewer and fewer opportunities to earn a paycheck. When BASS canceled its Majors, then later shortened its season, it beefed up the AOY purse

Here's a look at the payout structure for the Top 12 fishing right now:

Although the scale is obviously less the further down the standings one finishes, a pro has a lot to gain if be can move up into the 5th or higher range. 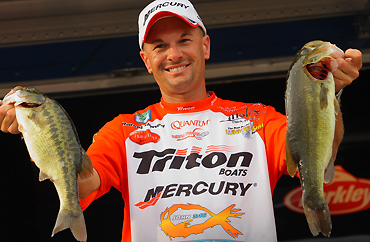 
Randy Howell says conditions on the river change so quickly, it's hard to tell what's going on.

Reports From The Field

Here's what a few of the pros fishing tomorrow's event had to say about current conditions.

Alton Jones
"They released quite a bit of water from Lake Jordan today. When they finally turned the water on the fish bit like crazy. You can get some bites before the current runs, but you have to fish totally differently. They're scheduled to do the same thing tomorrow at about 1:00, so it's important to have a pattern for when the current's running and when it's not.

"The water clarity didn't change much with the rain today, but when they run the turbines the water gets a little dirtier. It basically goes from clear water in the morning to dirtier water in the afternoon.

"I think the weights will be up a little more than they were at Jordan. It seems like there's more of those 4-pounders around. I wouldn't be surprised to see somebody break 20 pounds one day, and I feel like it'll take 16 or 17 pounds average to win."

Randy Howell
"It's definitely changing and it'll probably continue to change. It's hard to tell what it'll be like out there tomorrow, but it was definitely looking different this afternoon. It was coming up – it was a lot higher than it was. I was on the lower end and once the water catches up down there it'll look a lot different. It's a pretty challenging place. You're guessing the whole time at what's going on.

"I'm fishing some for largemouths specifically in the backwaters, and going out on some of the other main-river stuff and fishing for spots and largemouths. From what I've seen the fishing could be difficult. But it's hard to say what to expect until we start fishing, get some bites and see how big they are."

Todd Faircloth
"Yesterday I fished down south and it seemed like the water dropped about a foot late in the day. Today it came up probably that much. Conditions are changing day-to-day, and I feel like they'll change throughout the whole tournament. But generally when you're dealing with those conditions on a river it's a good thing."

There's an outdoors expo at the weigh-in site that starts at 2:00 p.m. both days. The Thursday weigh-in starts at 4:00. Friday's weigh-in, which starts at 6:00, will be followed by a concert featuring the Zac Brown Band.