BACK
Only Jones Still In Hunt

Texans Took A Tumble In First Leg Of Postseason 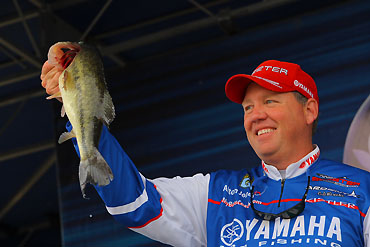 Alton Jones said he had the bites to finish high at Lake Jordan, but too many of those fish failed to make it into his boat.

Four Texans were among the 12 anglers who had a shot at the Bassmaster Elite Series Angler of the Year (AOY) award when Toyota Trucks Championship Week began last Saturday.

However, every member of that quartet lost ground in the first leg of the circuit's inaugural postseason – the Berkley PowerBait Trophy Chase at

Alabama's Lake Jordan – and now only one still has a mathematical chance at the top slot.

Alton Jones and Kelly Jordon were in the best positions of the four to make a run at the title. Jones started the postseason in 3rd place and Jordon was 7th.

But Jones is now 6th and needs a victory and some big-time tank jobs by the points leaders at the Trophy Triumph at the Alabama River this week to have any chance at the crown, while Jordon can only hope to gain a few spots and grab a larger share of the AOY purse.

The other two Texans in the field are Todd Faircloth and Gary Klein. The former fell from 5th to 8th in the points and the latter dropped from 9th to a tie for 11th. Like the rest of the bottom 6, they're out of AOY contention.

Lake Jordan wasn't kind to the visitors from the Lone Star State – even the one that shares its last name (although the spelling is different). Here's a look at what befell the two members of the foursome who had the most to gain.

Jones said his less-than-stellar showing was due to numerous quality fish that got away.

"I was literally on the right bites to win the event, but you have to catch those bites," he said. "When you're battling for Angler of the Year, execution is everything, and my problem was my inability to put fish in the boat.

"I was fishing one of my strengths, but I just flat failed to execute."

He flipped docks (the shallower, the better) with a Booyah jig, a Yum tube and a Yum Money Craw and caught a mix of largemouth and spotted bass.

"I lost a couple of key fish the first day, but then (on day 2) I really got clobbered. I lost one that was 5 (pounds) or more and two other ones that were over 3 1/2. The whole reason for flipping is to (be able to) catch your bites, but I still lost them."

One of the big ones got loose when his line ended up between the dock piling and the fire-hose cushioning that the owner had nailed to the wood, and another escaped when he couldn't negotiate it up and over a crossmember.

"If I had it to do over again, there's nothing I'd do differently – I'd still fish the same docks with the same baits. Maybe I needed to wait longer before setting the hook, I don't know."

Even Monday – a non-fishing day between the two events – held some negativity for him.

"One corner of our hotel room was just full of fire ants this morning," he related. "They got into my wife's purse and into some other stuff. This is on the 9th floor of a major hotel. That just goes to show the kind of week I'm having.

"One thing I'm real happy about, though, is the guy who's been the most consistent all year has been Skeet (Reese), and he's leading this thing. He's been on an incredible roll and my hat's off to him."


Kelly Jordon could've done without the bright sun that showed up in Alabama over the weekend.

Jordon is certain he'd have fared much better over the weekend if weather conditions had remained as they were on the final practice day – which is what forecasters had predicted.

"I could've had 16 or 17 pounds easy on Friday, probably more than that if I'd hit it hard. I could catch big spots on spinnerbaits and topwaters and I was flipping the mats for largemouths, all in one big, flat area. Then (on day 1) even the mats died."

He enters every tournament with a gambler's mentality and tossed snake-eyes at Jordan.

"It's sure disappointing, but it's a risk-reward scenario and sometimes you get burned. I've won a lot of tournaments and had some really bad finishes, and that's just kind of the way I roll. If I think something has potential, I'll go for it.

"I figured everybody would be on something strong and I looked for something that was exceptional. If the weather had stayed like the forecast, I think I would've done very well."

Despite his lowly rank in the standings, he's looking forward to visiting the Alabama River for the first time in several years. He notched a 15th-place finish at a Bassmaster Tour event there in 2003 and took big-bass honors in an Elite 50 the following season.

"I know what kind of fishing that place can offer and hopefully I can figure it out. They're supposed to be dropping the current and that might make the really big spots bite.

"Those big Coosa River spots are some of the baddest fish on the planet."