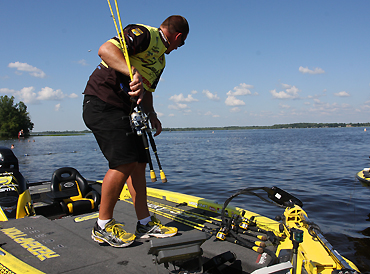 Skeet Reese rolled into Montgomery, Ala. with several different emotions.

Predictably, the Top 12 in the Toyota Trucks BASS Championship Week felt a range of emotions as they arrived in Montgomery, Ala. yesterday on the eve of official practice.

For those atop the race, there's the sense of a job that needs to be done. It's not very often a title shot comes along, and they aim to capitalize.

For those further down the standings, the general feeling is more relaxed. They've got nothing to lose and everything to gain because, under the traditional Angler of the Year (AOY) format, they'd have been well out of the race. But in BASS's revised format and points structure, which makes its debut this week, those pros suddenly have an outside shot at the title.

Below, some of the Top 12 pros reveal how they felt at the start of Championship Week. First, however, is a look at the current points standings, with distance from leader noted in red. Standings are followed by BASS's points-distribution system for the two Championship Week events.

Skeet Reese's emotions are somewhat scattered. After all, he would have been crowned AOY under the traditional format, and VanDam passed him after the conclusion of the regular season based on bonus points.

As he rolled into Montgomery, Reese told BassFan his emotions were "a little bit of everything. There's a little disappointment from the standpoint that, for the 35 years BASS has existed, AOY has been decided (the same way). The AOY was decided at Oneida and I won.

"Now that I made that point, this is new territory, and now I'm looking at 4 days of competition and beating these guys to get my hands on the trophy. So that's dealing with new feelings and emotions. It's a contest we've never done before, so we'll get through this week and see how it all plays out."

Reese added that he's "not stressed out" and certainly feels he can put the disappointment behind him. "It is what it is," he said. "I'm not like a racehorse in a stall waiting to jump out and run 100 mph. I'm just looking forward to getting going and whatever happens is whatever happens. I'll just do the best I can do. Hopefully I can keep catching them, stay consistent for 4 days and put this together." 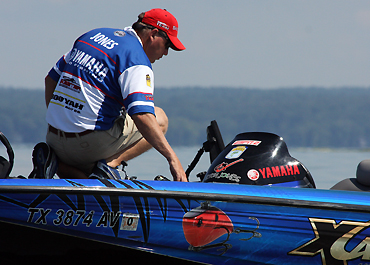 
Alton Jones feels the 'importance' of the week.

Alton Jones finally clutched the Bassmaster Classic trophy 2 years ago at Hartwell, but he's never laid claim to an AOY title. Ironically, the last time he was in contention was 6 years ago, when BASS concluded its season with a split-venue event at, yep, Lake Jordan and the Alabama River.

About how he felt on the eve of practice, Jones said: "I don't know if pressure's the right word, but I do feel a sense of importance. The closer it gets, the more I realize this is a big week. I think it's good, especially for practice, to go in with that in mind. I think it helps focus your work ethic to where it needs to be. I usually don't have a problem with that, but it helps you bear down.

"There's not many times in a career where you have a realistic chance to capture a major title and this is one of those times. I can feel the importance of the moment so I really want to work as hard as possible."

He noted too that his gameplan for today is no different than in any other event. He simply wants to find the "most solid" pattern he can and "exploit it."

"It's that simple. Sometimes it's the winning pattern, sometimes it's not, but the tough thing is none of us really knows where the bar is set – if it'll take 13 pounds a day or 15 or 17."

Mark Menendez sees Jordan as his pivotal leg. He's part of the four-way tie for 5th, so to have any shot at the title, he'd need an ultra-strong showing at the first event.

"I'll step up to the batter's box, swing hard and go deep," he told BassFan before his practice. "There's nothing to be lost here and everything to gain from my vantage point. I've got to go out and do my job and catch them really good these first 2 days to have a shot.

"So I'm looking at it as a two-prong hurdle. I need to get through Jordan. Then I'll focus on the river when the time comes."

Menendez is one of the better spotted-bass anglers in the field – a testament to his Kentucky Lake roots – and he feels Jordan is a "pretty good little structure lake, so it's right up (his) alley." 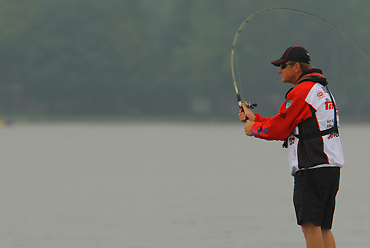 
Gary Klein says that he's 'mathematically' alive for the title, and that has him excited.

He said his first order of business for today was to do a full lap around Jordan to survey water color, clarity and bait presence. He called it "the tourist effect." After that he'll "hit it hard" with a crankbait and see what turns up.

"It would be huge to sneak up on these guys and win this," he added. "I've never been in this position before, but I tend to buckle down when it comes to Championship-like weeks. Over my career, I've tended to put it together in weeks like that. This week, I'm looking to do the same."

Two-time AOY Gary Klein sits at 26 points back right now and is excited.

"This is awesome," he said. "Mathematically it's doable. I'd have to have nearly a flawless performance, and the other guys would have to stumble, but it's a possibility. That's exciting.

"As far as the events, I'm here to fish and I'm looking forward to it. We're already in our brackets. I have 179 points – there's nothing I can do about that – so now it's time to enjoy and just do what I know how to do, which is fish, work hard and have a good time.

"It's really a no-pressure deal for me. It's been a really good year, I've already had a good showing and I'm looking forward to the Classic, but this is going to be real, real interesting."

> The Championship Week field practices today and tomorrow on Lake Jordan near Montgomery, Ala. then competes for 2 days there. Afterward, they rest for a day, then do another two-and-two at the Alabama River in Montgomery. Watch for BassFan's daily coverage of competition starting this weekend.