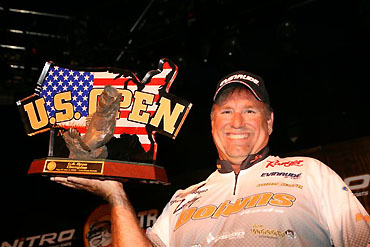 After so many near misses, it's no understatement to say that Gary Dobyns was obsessed with winning the WON Bass U.S. Open.

"Oh yeah, you could say that easily," said the 50-year-old Californian who finally accomplished that elusive goal last week. "I'd won everything major in the West but the U.S. Open, and it drove me crazy because I came so close so many times.

He topped the standings after each of the three weigh-ins and took control of the event on day 2, when he weighed a tournament-best 13.10-pound sack. His 32.91 total bested runner-up Cliff Pirch by almost 3 1/2 pounds.

Dobyns practiced 10 days for the event over a 3-week period, which included three trips to the Las Vegas area from his home in the northern California town of Yuba City. He flew out of nearby Sacramento on the first two trips and fished out of a borrowed boat, and then made the 12-hour drive for the official practice session and the tournament.

"I had 2 big-weight days (10 pounds or more), 4 two-fish days and then 4 days I considered okay – 8 1/2 pounds or so. My whole theory about Mead is there isn't a lot of fish there and the faster you go and the more water you cover, the better off you are. It was pretty much all power-fishing – I was trying to catch the good fish."

His best success catching fish that went 2 1/2 pounds or more came either on a Yamamoto Hula Grub or a Lucky Craft DBS 4 crankbait. For sheer numbers or to fill out a limit in a pinch, he could turn to a Lucky Craft Gunfish topwater bait.

"I knew I was just going to have to wing it and figure out what they were doing every single day."

Day 1 brought the type of weather that the U.S. Open is infamous for – before it was over, temperatures would soar well into triple-digits and there was rarely even the hint of a cooling breeze.

Because he'd had so many miserable practice days, Dobyns decided to spend some of the early morning in the Narrows on his way to the main lake from the launch at Calville Bay. That resulted in three run-of-the-mill keepers.

Despite battling nausea and dehydration for much of the day, he caught a strong bag from several points in the middle of the lake. It included a 3.90-pounder that held up as big fish of the tournament and another largemouth that topped 3 pounds.

At the end of the day, he was at the top of the leaderboard and held a 5-hundredths of a pound edge over Arizona FLW Tour pro Cliff Pirch, who would remain in his rearview mirror throughout the event.

On the morning of day 2, he was headed up the lake to the place where he'd caught his two biggest fish the previous day when he noticed some waves crashing up on a point that had produced for him in the past. He made a quick U-turn and caught a 2 1/2-pounder on his second cast with the crankbait, and a 3 1/2 on the ensuing cast.

"When I was getting that second fish off, the boat blew up on the point and I kind of wrecked it," he said. "But then I moved off to the front, out in 20 feet of water, and caught a 2 1/2 on the Hula Grub."

A similar point produced another 2 1/2, and that freed him up to make a move to the Vegas Wash – the primary channel that brings water back to Mead from the Las Vegas Valley.

"The biggest fish in the lake live there, and I was beating my head against the wall in practice because I couldn't catch them. I didn't catch them on day 2, either."

A long run to the Temple Bar area produced a bunch of keepers, but nothing spectacular. Nonetheless, his big bag extended his advantage over Pirch to nearly 6 pounds.

He began day 3 in a mode he calls "fishing chicken," which meant he was focused solely on catching a limit of keepers. He tried dropshotting in three different areas, and that produced nothing. 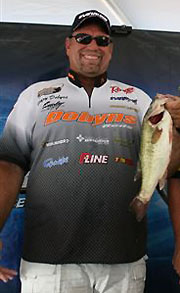 
Dobyns knew he'd won the U.S. Open when he got this 3-pounder into the boat on day 3.

"I finally decided that I couldn't slow down and fish like that, so I picked up the Gunfish and caught seven fish just flying down the bank in the Narrows. That meant somebody was going to have to catch a big, big bag to beat me."

He went to the Vegas Wash at about 9:30 and finally got his first bite there – a 3-pounder enticed by the Hula Grub.

> "I'm real picky about hooks and I love that Gamakatsu 60414," he said. "I make all my own jigheads and dartheads because I want that hook in there."

> "The lake is so clear that I instantly grab for the ghost minnow, but those fish like a brighter bait sometimes. The Tennessee shad has a lot of white in it and it was better for me. It did most of the damage."

> "That was my confidence bait," he said of the Gunfish. "I knew I could throw that all day, every day, and I'd be guaranteed of making a check."

Main factor in his success – "Putting in so much time on the water and realizing there wouldn't be one or two baits or one or two patterns or one or two spots that would bail me out. I had to be prepared to change and make adjustments and I always had to be hunting for a new place to fish."

Performance edge – "This might sound very arrogant, but I think I make the best rods available in the United States right now."

> The final day coincided with Dobyns' 31st wedding anniversary. "That was really cool, and so was the fact that I had so many people pulling for me to win this tournament. Knowing you have that many friends makes you feel awful good."