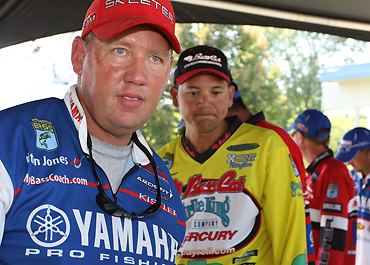 The last time Alton Jones was in contention for an Angler of the Year title, the field fished the same venue combination – Lake Jordan and the Alabama River.

For the first time ever, the BASS Angler of the Year (AOY) title – considered by many to be the most prestigious title in the sport – will be decided separately from the regular season.

That statement should be quantified, though. First, BASS has held specialty events outside the regular season before – notably the Elite 50s and Majors – but neither counted toward the AOY race.

Also, back in 2003 (when BASS expanded the Bassmaster Tour to 10 events), it cut the field twice throughout the year until only 50 pros were left. Those 50 pros fished the final 2 events of the season, and those final events had a quirky format wherein the Top 6 fished the final day in a "Showdown" hole-course format. So yes it was a little different, but it was still the regular season.

Coincidentally, the final event of that 2003 season featured a split venue. Anglers fished the Alabama River for the first 2 days, then the Top 12 moved to Lake Jordan.

If that sounds familiar, it's because those same two venues will decide this year's AOY.

Next month, the Top 12 in the AOY race compete in the Toyota Trucks Championship Week at Lake Jordan for 2 days, then move to the Alabama River for 2 more days to decide the AOY title.

So it's essentially a flip-flop of the 2003 venue order, without the puppet strings of a pre-designated hole course.

For historical reference, Kenyon Hill won that Alabama River/Lake Jordan event, but Jay Yelas came out on top of the AOY race. Alton Jones finished 2nd in the race and Mark Davis 3rd.

Yelas fished day 3 but not day 4. Jones didn't make the Top 50 and thus didn't advance to fish Lake Jordan. Still, it's ironic that he'll again vie for an AOY title at the Alabama River.

"I've actually thought about that," Jones said. "I don't know if what I have is deja vu, but it's interesting that the last time I was really in contention to win AOY, it was decided at the Alabama River.

"Of course, at that (spring) event, the river had a severe flood," Jones added. "Jay was taking his Skeeter up where you could normally only take jet boats – he was fishing up at the dam. They put that area off-limits this year."

How the Points Work

The Top 12 pros from the BASS AOY race made the cut to fish Championship Week. To simplify the points, BASS moved the decimal point one place to the left and rounded. Afterward, BASS awarded 2 bonus points to any pro in the Top 12 who'd won an event this year.

Skeet Reese led the points after the final regular-season event at Oneida, but VanDam moved ahead of him by 1 point due to the bonus.

Tommy Biffle and Mark Menendez also received 2 bonus points, which moved them up and created a four-way tie for 5th.

Here's a look at the points as they stand right now. Total points are followed by distance from leader in red.

Points are distributed at the two Championship Week events in the following manner:

A few observations about the points:

As noted, the field will fish Lake Jordan for 2 days, then the Alabama River in Montgomery, Ala. for another 2 days. Practice sessions accompany both legs.

BASS has held tour-level events at the Alabama River other than the 2003 Tour Showdown, most notably the 2004 Alabama River Elite 50 and back-to-back Bassmaster Classics in 1981 and '82.

Both Classics took place in October, when fish were more into their fall patterns, and it took 35 pounds for 3 days to win in '81 (Stanley Mitchell) and 32 1/2 pounds to win in '82 (Paul Elias).

The Elite 50 was held in early June out of Prattville. For the final 2 days, the Top 12 who made the cut fished a hole course, so that's not a relevant weight reference. But over the first 2 days, Tommy Biffle led the cut with a little over 28 pounds for nine fish.

The bite at the Alabama River next month for Championship Week is expected to be tough. Rain and flooding isn't a concern yet. Instead, September's widely regarded as a tough "summer" month there, which should make for difficult fishing.

> Watch for more stories about Championship Week and the field over the next 3 weeks.

> Along with the title, significant money is also on the line at Championship week. The AOY winner pockets $200,000, the runner-up receives $75,000, after which payouts decrease incrementally down to $14,000 for 12th.