Smallmouths, Largemouths Both Held Many Possibilities 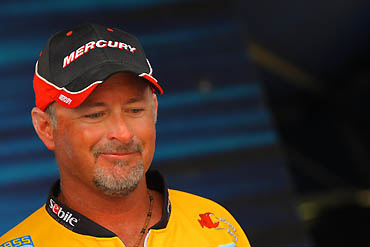 Jeff Kriet rode schools of suspended smallmouths to a runner-up finish at Oneida.

New York's Oneida Lake forces anglers to make more decisions than perhaps any other regular stop on either of the top pro circuits. Largemouths or smallmouths? West end or east? Shallow water or deep? Rocky shoals or vegetation? Power-fishing or finesse?

Any of the various options could be a ticket to a high finish, or it could be a rock around the neck that'll take an angler straight to the bottom of the standings. And since everybody catches at least a 10-pound limit every day, the calls that result in an extra pound or two in the bag are critical.

Here's a look at the tactics and techniques employed by the anglers who finished in the immediate wake of winner Chad Griffin.

Jeff Kriet's bags got bigger every day and culminated with one that was the second-largest of the tournament, surpassed only by the stringer Griffin compiled on the first day that contained a 5 1/2-pound largemouth. He found several schools of quality offshore smallmouths during practice, including one with particularly large specimens that wasn't fully cooperative until day 4.

"It's really hard to get a 3-pound average on smallmouths, but that's what I fished for all week and I fished really good," he said. "I really like to catch suspended fish on offshore stuff – they frustrate a lot of guys, but I'm comfortable with it.

"I fished shad exclusively. I'd look for birds, and if they weren't there I'd idle around until I saw the big balls of shad up close to the top. They were a lot harder to catch if they weren't blowing up a little bit, but you could still catch a few if you stayed around the shad."

He threw several baits during the week, but all of his weigh-in fish were enticed by a Big Bite Baits tube. He'd cast it into the school and count it down to the proper depth (anywhere between 12 and 20 feet), and then give it a hard jerk.

Main factor in his success – "The way everything set up, it played right into my hands. (A win) just wasn't meant to be."

Performance edge – "My Lowrance 113 graphs allowed me to see the bait and see the fish in the bait. Also, I switched to Falcon rods a little while back and that's made a big difference. I didn't lose a fish in 4 days that cost me." 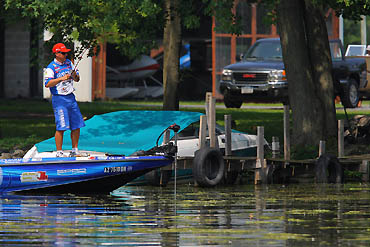 
Dean Rojas stayed committed to the super-shallow largemouths and turned in yet another high Oneida finish.

Dean Rojas, the winner at Oneida last year, was the only member of the Top 5 who focused exclusively on largemouths. He fished the same way (throwing a frog and flipping) he did the previous year, but didn't get as many big bites.

"I must've been asked 50 times whether I thought I could win again and Kermit this and Kermit that," he said. "I stuck to my guns and went for it and I was consistent all the wa through.

"If you'd have told me before it started that I was going to catch what I did, I'd have said I'm either going to win or come in 2nd. Instead, I came in 3rd."

He caught 14 weigh-in fish on the frog and the other six with a flipping stick.

> "I don't know if the color of the frog was important, but with the algae bloom and the thick mats creating a smorgasboard of conditions, black was a good, general color. I stuck with that and they seemed to like it."

Main factor in his success – "I did what I know how to do real well."

Performance edge – "I'd say the quality of the rod, reel line and frog. Throughout the week I probably casted that frog 7,000 times – I was only working it 3 or 4 feet at a time because everything was so target-oriented. My equipment was flawless." 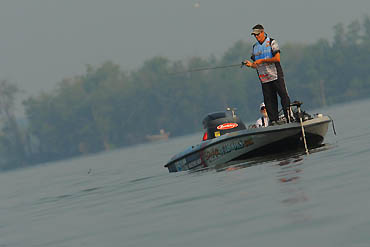 Matt Sphar, the only New York resident in the field, fished much the same way that winner Griffin did. His past experience at Oneida was a big factor.

"It definitely helps knowing some of the areas that hold a lot of the fish," he said. "A lot of the pros understand where the largemouths live and there's only a few prime areas like that. But from being there in the past, I knew that one possible way to catch big bags was to go out in the weedbeds and grind it out."

He flipped up the weed fish with light gear – 12-pound-test fluorocarbon line, a 1/8-ounce shaky-head jig and a 4-inch Senko.

"I never did break any off, so I guess it was a decent call. Those places get quite of pressure from guys power-flipping Beavers and things like that, and in that clear water the fish can be pretty finicky.

He also caught some smallmouths that went to the scale on a popper and a frog.

> It was just an old junky one," he said of the chugger. "The biggest thing was it had to be a small bait. I had a small Spook that was working, too, but a fish broke me off and it was gone."

Main factor in his success – "Knowing there were fish somewhere in those weeds and knowing what I needed to do to catch them, and also having some backup plans."

Performance edge – "My Lowrance X-28 helped me spot a lot of the offshore structure, and there were specific weed clumps that I wouldn't have been able to fish if I didn't have them marked." 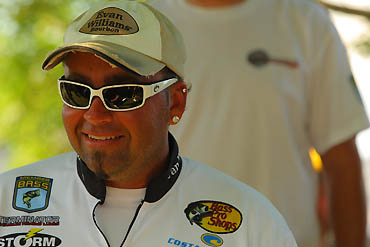 
Jason Quinn's 5th-place showing moved him up 20 places on the points list and into the 2010 Bassmaster Classic.

Jason Quinn hadn't placed any higher than 20th in the previous seven Elite events and a Bassmaster Classic berth was such a remote possibility that it wasn't even on his radar coming in. He was not only able to get inside the Top 50 in the Toyota Tundra Angler of the Year (AOY) race to gain some of that prize purse, but he climbed all the way to 35th and secured a spot at Alabama's Lay Lake in February.

He focused on the outside edge of grasslines with a topwater lure and a spinnerbait and had some suspended fish that he could catch on a tube as a backup. Of the 20 fish he weighed in, 17 were smallmouths.

Main factor in his success – "Fishing as hard as I could every day. It came down to not holding anything back."

Performance edge – It was actually the line – I never took the time to re-tie, but the Trilene 100% fluorocarbon never let me down. And my Lowrance X-28 was equally important for helping me find the suspended fish."