BACK
Kriet's Charge Comes Up Short

Chad Griffin made good on his promise to choke up and shed a few tears on stage if he won the Oneida Bassmaster Elite Series in New York. A lot more emotion flowed a short time later when he was all by himself.

"I did a lot better up there than I thought I would," said the rookie from Texas after closing out the victory with a 15-10 sack that gave him a 65-10 total for 4 days. "When I really lost it was when I got back in my boat and I was idling over to the ramp to load it on the trailer.

"I was talking to my mom and dad on the phone, and this is just a dream come true for all of us."

His final tally left him 2-04 clear of runner-up Jeff Kriet, who did about all he could on the final day to achieve his long-sought initial Elite Series triumph. The Oklahoman's 18-02 bag was second-best of the tournament, surpassed only by Griffin's 18-08 haul on day 2, and he finished with 63-06.

Here's a look at how the remainder of the Top 12 stood after the scale closed:

The 12-angler field for the first-ever two-tournament postseason to decide the Angler of the Year (AOY) was set today (for more on that, click here). The Top 37 in the points also locked up berths in the 2010 Bassmaster Classic, with Jami Fralick prevailing in a three-way tie with Mark Tucker and Matt Reed at No. 37 by virtue of most total weight caught on full-field days (days 1 and 2) throughout the season. To see the updated points list, click here. 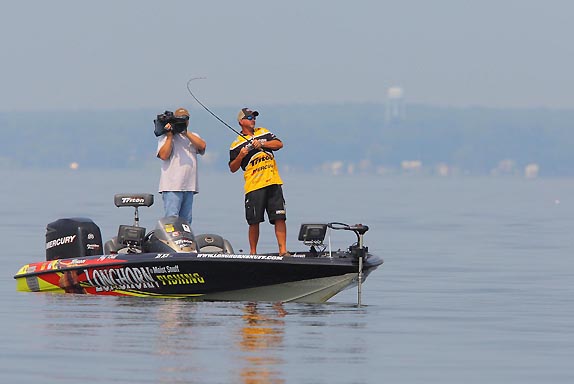 
The school of oversized smallmouths that Jeff Kriet found in practice finally went into a biting mode today.

Griffin became the first rookie to win an Elite Series event since Casey Ashley triumphed at Virginia's Smith Mountain Lake in June 2007. His previous-best finish was 32nd at Arkansas' Lake Dardanelle in the second event of the season.

Griffin said he's had only one day in his life that was better than this.

"The only thing that tops it was watching my daughter be born (7 years ago)," he said. "Other than that, it's the happiest moment I've ever had. It's what I've been dreaming about since I was 8 years old and it's happened.

"I thought I would eventually win one, but I didn't think it would happen this year."

He had all his weight by 9:00 today when he lost the topwater chugger that became his primary bait over the final 2 days. A backup battery he received from road roommate Rick Morris alleviated the fish-care worries he'd had the previous day, but he was unable to cull without his go-to lure.

"I had another one, but it wasn't quite the same color and the fish would roll on it, but they wouldn't eat it. I really didn't think I had as much weight as I ended up with, but I thought I probably had enough (to win).

"If I had 14, then Kriet or Hackney had to have 19 and I didn't know if that was possible, although Kriet busted a heck of a bag. After he weighed in, I started staring at my fish a little more. If he hadn't had that, I probably would've started crying before I even got to the stage."

His main tactic for the first 2 days was flipping an Ezee Jig that he designed and is produced by a company owned by him and his parents. He weighed in 10 smallmouths and 10 largemouths for the tournament.

Full details of his winning pattern, as well as the other top finishers, will be posted soon.

Kriet's runner-up showing equaled his best ever on the Elite Series, but wasn't wholly satisfying.

"I'm kind of getting used to it – I've finished 2nd before," he said. "I went in thinking I had a pretty good chance to win and I felt like it could be won with smallmouths. I pretty much got beat by a 5-08 largemouth (caught by Griffin) on the first day.

"If I keep fishing like this, the win will come."

"That school of big ones I had showed up today – maybe a day too late. I probably could've done close to that every day if I could've spent the whole time on that school, but they didn't come around until today.

"It was the best school I had – the average was about a 3-pounder and there were some 4s in there. I weighed three 4-pounders today. The other school had good ones, but they maxed out around 3 1/2 pounds."

Rojas didn't quite achieve his second straight win here, but he'll leave with a Classic berth in hand and the knowledge that he made a strong run at the trophy. He accomplshed that despite predictions that his frog/flipping combo pattern in the super-shallow water he favors wouldn't produce like it had in the past because so many anglers were testing it in practice.

"I was shooting for the win, but I got beaten by smallmouths," he said. "But I stuck to my guns and weighed 20 largemouths for 60 pounds. That's pretty darn good, I think. 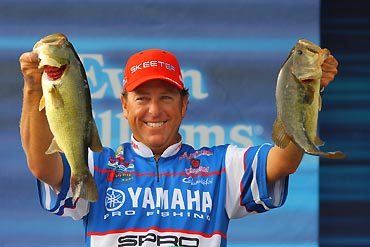 
Dean Rojas stuck with largemouths and came within two places of back-to-back victories at Oneida.

"It was a good week. I fought my way into the Classic (from 44th in the points) and there were a lot of positives going on."

He had a limit by 9:00 today, which was earlier than he'd achieved that feat all week. He ended up replacing all of those with larger specimens.

"I caught a lot more fish that on any of the 3 previous days because I really got to fish the area. Before I was breezing over everything and catching what I could, and then getting out. Today I kept going back whenever I wanted, and I kept catching them."

Sphar was happy that he produced a high finish with a lot of rooters in attendance.

"This place is a couple hours from where I live (in Pavilion, N.Y.) and I've fished it quite a few times, but it's a tricky lake," he said. "It's one where you really have to grind it out, and I was proud to make a Top 12 with a lot of guys from the club in Rochester and the state Federation Nation here.

"I had a really good fan base rooting for me and I was able to pull off a good finish."

He fished a mix of schooling smallmouths and weed-dwelling largemouths throughout the week, but the largemouth pattern tailed off today.

"The largemouth area was on the main channel and being the weekend, it got a lot of boat traffic. The waves were slapping the boat and the fish didn't bite that good in the morning.

"I caught one good one, but then I had to scramble around. I hit some docks and then I threw a frog for awhile, and I used a popper to catch some smallmouths."

Quinn entered the event 55th in the points and was really just hoping to slip inside the Top 50 to grab a piece of the AOY purse. Instead, he climbed all the way into the Classic.

"I'm excited about it – that's a good thing," he said. "I thought I might have a chance after the first 2 days, when I saw that a lot of the guys up around the (Classic) cutoff had fallen out. I started to thing it was very doable.

"I fished a clean tournament and it was kind of a home run all the way around."

He threw a topwater plug and a spinnerbait around the outside edges of grasslines and had some suspended fish as a backup. He caught a limit in about 90 minutes today and ended up going through about 20 keepers.

All but three of his 20 weigh-in fish were smallmouths.

Kennedy completed a nice comeback from a 90th-place standing after day 1 and logged his third consecutive finish of 7th or better.

"It's not too bad at all considering where I started," he said. "Going in I thought I had a pretty good shot at winning, but day 1 was a huge disappointment. I'm not sure I could've beaten (Griffin), but I really expected to do well here."

"Last year I led on day 1 and had a fairly decent day 2, but I ran out of fish on day 3 and came in with 8-something. This year I told myself to manage my fish better, and what I did was manage to let other people catch them on day 1. So I punted and went to some areas farther down the lake, and those (schooling) smallmouths I stumbled into in the middle of day 2 made a big difference."

He weighed 14-07 today and had all of that by mid-morning.

A Kinami Flash was his primary bait for the week. For the schooling fish, a Yamamoto Shad Shape Worm fished on a dropshot rig was most effective.

Hackney dropped five places in the standings today with an 11-06 bag, but that didn't detract much from his enjoyment of the tournament. 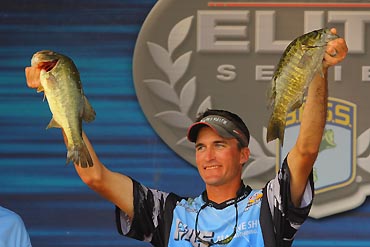 
Matt Sphar had to scramble today to catch his 14-12 bag.

He said he whiffed on about 16 of the first 20 bites he got today.

"They were so aggressive this morning and everything happened so quick, and I just didn't catch them. I still ended up catching about 30 fish, but all my big bites came early. Then I spent the last 3 hours looking for three big groups of largemouths, but it was like they'd vanished.

"Hindsight being 20-20, I could've stayed with the smallmouth and fished for 2nd place, but I couldn't win that way. I took a chance and it didn't work out."

Following are some notes from other anglers in the final-day, taken from the weigh-in.

Tommy Biffle (8th)
"I wanted to make that Top 12 (on the points list), and I figured I had to play it a little safe and catch a limit of smallmouths every day before I went and fished for the largemouths. That's what I did."

Gerald Swindle (9th)
"I'd never gotten a check here, and after coming here and making a Top 12 and locking myself into the postseason, my tank's empty. I caught a lot of fish today, but they were all small. I kept pressing forward, but sometimes when you do that, you get knocked out."

Terry Butcher (10th)
"Coming into this tournament, I thought I was going to need a Top 5 to make the Classic. I put myself in position, and it worked out that a couple of guys stumbled a little bit, and I got it done."

Bernie Schultz (11th)
"Something about fishing in New York agrees with me and I like it. The fish relate to the grass like they do back home (in Florida), and in a way that makes it familiar. The first couple of days it was hard to get bites, but that wasn't a problem today. I got a lot of bites, but they were just small fish."

Takahiro Omori (12th)
"This is one of my favorite places to fish. Historically largemouths have won the tournament here, but it got tougher and tougher for me every day."

> Kriet's other runner-up finish on the Elite Series came at Grand Lake in his home state in 2007.

> Hackney caught the vast majority of his weigh-in fish this week by flipping his new Strike King Hack Attack jig (the 3/4- and 1-ounce versions). "It's got all the weight in the head, which makes it fall straight down. And it's got a heavy-wire 6/0 tuna hook that a fish will never bend. I think over the next year, you'll see just about every heavy-cover flipper using it."