BACK
One Too Many 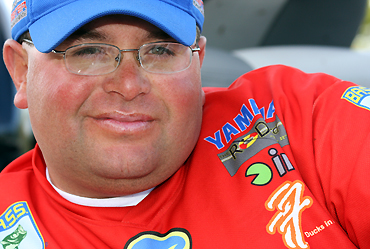 The disqualification of Bill Lowen's day-1 weight eliminated any chance he had of qualifying for the 2010 Bassmaster Classic.

After culling numerous times over a 4-hour period this morning, Lowen discovered that he had six fish in his livewell – one more than the tournament limit. He immediately threw one overboard and called tournament director Trip Weldon to notify him of what had happened, but said he instantly realized that ridding himself of the sixth fish had been a mistake.

Had he brought an over-limit to the weigh-in, tournament officials, under Elite Series Rule C16 (Scoring), would have culled down to the limit beginning with the largest bass, and then weighed the remaining five. The rule proscribes no weight penalty for extra fish.

But he said he skewed everything by culling the additional fish. That left Weldon no way to verify what he had in the box at the time of the violation, and thus no way to ensure that it was his largest fish that would be taken out of the equation. Therefore, Weldon had no option but to DQ his weight.

"I had a brain cramp there when I threw that fish back in the water," he said. "My marshal didn't know what was going on and I probably could've not said a word and just gone on like nothing had happened, but I wouldn't have been able to live with myself. Then somebody might've found out about it later on and I would've really looked like a butt."

Had he driven back to the launch with six bass in his well, however, he would've been in violation of New York State Department of Environmental Conservation Regulation 10.1, which prohibits the possession of more than five black bass (smallmouth and largemouth combined). Elite Series Rule C6 (Sportsmanship) states that "all competitors are bound by the prevailing statutes and regulations of the various states within which they fish."

He said that when the violation occurred, he had four smallmouths and a largemouth in his well. The largemouth was the smallest of the quintet.

He caught another solid smallmouth that would've bumped the largemouth, but he noticed that it was bleeding when he put it on the balance beam and he wanted to get it into the well as quickly as possible. He inadvertently put the largemouth back in the box, too.

"Then I caught another good one and opened up the lid, and there was that largemouth staring at me. I knew right then that I had six fish in there."

He came into the tournament at No. 42 in the Angler of the Year (AOY) race and could've gained a Bassmaster Classic berth with a strong showing. Tomorrow he'll try to catch enough to remain in the Top 50 and garner a small piece of the AOY purse.

"I ended up turning loose about 13 1/2 pounds and I hadn't even gone to my largemouths yet. It was one of those days when everything was going right and every cull was dead-on. I don't even know how many fish I caught, but it was a lot.

"I immediately got on the phone to all my sponsors so I could let them know what happened before anything came out about it. They all said they respected me for doing the right thing, and that was worth its weight in gold."